You, Me and Dupree

"I'm innocent!" proclaimed Dignan (Owen Wilson), the reckless child-man in Wes Anderson's "Bottle Rocket" (1996). Now it's 10 years later and Dignan has aged into Dupree, 36 years old, a wild and innocent man-child with much longer locks. Or, at least, that's how the makers of "You, Me and Dupree" would probably like you to think of him. They'd also like you to think of "Wedding Crashers," last summer's $200-million-grossing comedy in which Wilson played second fiddle to Vince Vaughn, eventually relegated to the relatively thankless role of romantic lead -- or, essentially, the part played by Matt Dillon in this picture.

Fundamentally, though, "You, Me and Dupree" is a variation on the old Guest Who Will Not Leave template. The obliviously uncivilized Dupree is the descendant not only of Dignan, but of Michel Simon's uncouth prole in Jean Renoir's "Boudu Saved From Drowning" (remade by Paul Mazursky as "Down and Out in Beverly Hills" with Nick Nolte) -- with a dash of Monty Wooley as "The Man Who Came to Dinner." At least in the first act.

And that's where the problem starts. The premise is that newlyweds Carl and Molly Peterson (Dillon and Kate Hudson) take guilt-tinged pity on Carl's downtrodden best friend and best man Randy Dupree, who has lost his job... and his apartment... and his car. And all on account of taking some unauthorized time off to attend their wedding in Hawaii, where Molly's dad, real estate tycoon Bob Thompson (Michael Douglas), toasts the couple by making demeaning jokes at Carl's expense. Bad form, bad omen. Oh, and he's also the owner of the firm where Carl works, which builds soulless housing developments with names like The Oaks at Mesa Vista on barren plots in the apparent vicinity of where Cary Grant encountered the murderous biplane in "North By Northwest."

For a while, it's almost like "Fatal Attraction" with a blonde best friend instead of an adulterous lover. The movie plays with our sympathies, alternating between revulsion and compassion for Dupree: Is he really a misunderstood guy, down on his luck, who means well but just hasn't grown up and found himself? Or does he have something of the feckless, sociopathic manipulator in him? For a while we're not sure. The problem, in retrospect, is that the movie isn't either.

"You, Me and Dupree" has the feel of a film that could have gone in any number of directions, and perhaps at one time went in all of them. What remains seems to have been carved, piecemeal, out of a more amorphous and haphazard assembly of takes. It's not that it doesn't maintain the requisite three-act structure. But what good is structure when the story and characters make no sense from one moment to the next? Nobody's actions -- whether a sudden desire to lose weight, or the accidental ignition of a leather sofa -- have implications or consequences that anyone seems to remember even five minutes past the punchline. And after a while that gets not only disorienting but irritating.

The film relies on what Roger Ebert calls an Idiot Plot. Characters are required do things or to react in ways that only make sense in terms of getting a laugh, or forcing the plot down a particular course (mainly by simply abandoning the old course). The whole thing depends on them behaving in ways that no human beings would ever behave under similar circumstances. What we have here, again and again, is the comedy equivalent of "Don't go down to the cellar!" in horror movies. If Carl had just once told Molly some of the things her father was saying to him at work, or even that he was habitually keeping late hours at Daddy's direct behest... well, he doesn't.

All the characters suffer terribly from identity crises. At any given moment their identities are defined entirely by whatever they happen to say about themselves, or what others say about them. Carl possesses a unique and wonderful "Carl-ness" -- but only because Dupree says so. Besides, anybody can change, arbitrarily, on a dime. One minute Dupree is a boor, a physical klutz and an idiot incapable of deciphering basic conversation; the next he's reading a Mensa magazine, writing poetry, and cooking a fabulous Tuscan meal with the flair of a master chef. Molly is appalled by Dupree's gross, "unhousebroken" manners, then she's the one who unaccountably sides with him and fixes him up with a librarian from the school where she works. Carl tries to do the right thing by Dupree, then becomes the insanely jealous villain (for a while), creepily slicking his hair back in a few scenes like Dracula or Hannibal Lecter -- or Michael Douglas in "Wall Street."

Even more perplexing are the laborious set-ups for gags that are missing their payoffs -- the most notable being an entire character (Mandy, the love of Dupree's life for a few scenes) who never actually shows her face onscreen. We keep waiting for the punchline, but there isn't one. It seems she has simply been cut out of the movie (wait for the DVD, kids!). Perhaps, at one time, she was Annie, the fifth-or sixth-billed character supposedly played by Amanda Detmer, whom I do not recall ever showing up for work.

The witty and colorful costumes and set design occasionally upstage the actors (none of whom is bad, just limited by this material). That purple tie with the flowers that Matt Dillon wears is pretty darned cool. And Kate Hudson's lemon-chiffon-colored negligee is, uh, probably even cooler. Meanwhile, Michael Douglas's ostentatiously Zen-themed office may be the funniest gag in the whole picture.

There is some funny stuff around the edges of this movie; it's the jerry-rigged mechanical engine at the center that's broken. Let me give one more example that's indicative of what's gone wrong: In a job interview that Dupree seems determined to fail, he asks about the company's policy on Columbus Day and professes to be aghast that people are expected to work on the day honoring of the guy who discovered America. Good joke. But he follows it up by saying he won't even ask about "Victory Over Japan Day." Nobody laughs. You know why? Because anybody who remembers what that is knows it's called V-J Day (which would have been funny, and I'll bet that's the original form of the joke). Explaining the joke for a younger target demographic, by calling it "Victory Over Japan Day," kills the gag. I think he should have said "Take Your Daughter to Work Day." Think about it. It's funny. 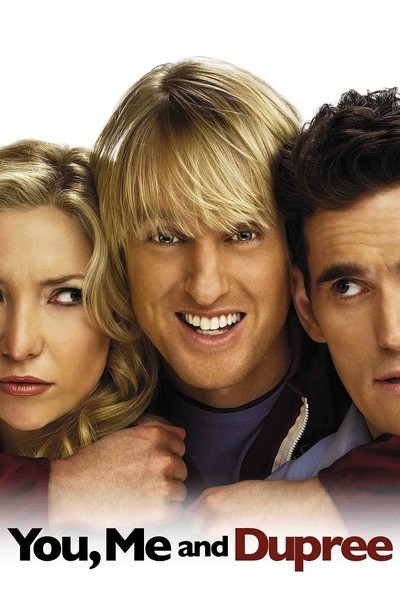