Who (ghost-?) wrote Whose idea was Mall Cop? 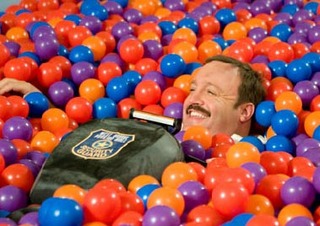 It's the "Number One Movie in America!" Again. Who wrote it? The "Paul Blart: Mall Cop" screenplay is credited to its star Kevin James and Nick Bakay, who also wrote and co-starred in some episodes of James' TV series, "King of Queens." Meanwhile, an anonymous tipster ("Nomen Nescio") who claims to have worked on the film has sent me a link to an award-winning, undated (but pre-2004) script named "Mall Cop" by a self-described ghostwriter named Alfred Thomas Catalfo, whose IMDb credits include the shorts "The Norman Rockwell Code" (2006) and "The Stag Hunt" (2008).

So, would you believe that "Paul Blart: Mall Cop" is based on an award-winning screenplay by an uncredited writer? What's the story? Or is there one? Surely more than two scripts have been written involving mall cops in "Die Hard" parodies. And maybe it's a coincidence that the movie was shot in New England, where Catalfo is also based....

UPDATE (2/5/09): Catalfo now tells The Boston Herald that he got a rejection letter from Adam Sandler's Happy Madison productions saying they prefer to develop their projects "in house."

I can't comment on the similarities (if any) between Catalfo's script and the movie (having not seen "Paul Blart: Mall Cop"), but I have contacted Catalfo via e-mail to see if he can enlighten. (See update below -- received minutes after I published this.)

People get paid, and paid well, for pitches -- like, say, "Die Hard" with mall cop. What's unusual and intriguing about Catalfo's "Mall Cop" is that the festival- and competition-award-winning script is hosted on a site called Scriptghost, "a professional screenplay ghostwriting service," run by Catalfo himself, who is described as a "screenwriter, director, producer, member of the Screen Actors Guild and attorney." From the Scriptghost homepage:

Everyone has an idea for a film script.

Not everyone has the time, writing experience, or the story structure and formatting knowledge to write a professional screenplay.

Best of all, when it's finished, YOUR name goes on it.

So, if you sell it to a studio or get a production deal or even win an Academy Award...

Let us write the next one for you, too!

Reviews indicate that 2009 Oscar nominations are probably not in the stars for "Paul Blart: Mall Cop." And if Catalfo & Co. did work on the script, any further comment may be contractually verboten -- but I sent my inquiries anyway. (No reply yet.) Maybe I'm naive, but I didn't know you could just go out there and advertise yourself as a Hollywood ghostwriter on the World Wide Internets! From the "How It Works" section:

Scriptghost™ functions as an author-for-hire and will take no copyright interest whatsoever in your project. It is important that you and Scriptghost™ feel secure in discussing confidential material. Therefore, prior to discussing or reviewing your idea, Scriptghost™ requires a standard submission agreement, which we will send to you upon request. We also strongly suggest that you copyright your story and/or register it with the Writers Guild of America prior to submission.

In conventional circumstances, it would be unusual under Writers Guild rules for the original writer to receive no credit at all unless virtually everything (story, dialog, characters, premise) were radically changed. Of course, it's incredibly common for many, many writers to polish, punch-up and/or totally re-write a studio script -- especially a comedy. (Did you know that Quentin Tarantino and Peter and Bobby Farrelly wrote drafts of "It's Pat: The Movie," though very little was in the final version? It's true!)

Can't wait to find out if there's more to this story. I'll let you know what I find out. Meanwhile, if you've seen "Paul Blart," please leave your comments on any resemblances (or lack thereof) to Catalfo's script.

Afterthought: What if "Mall Cop" is the ghostwritten script and "Paul Blart" is an earlier version? Or what if...

UPDATE: I received a reply from Catalfo's address, but all it said was: "Thank you for your message. May I ask who sent the link?" I responded that I shouldn't name the source, but it appeared to be from an anonymous e-mail address anyway.

A COUPLE HOURS LATER: Catalfo responds: "I can tell you that I wrote my script 'Mall Cop' in 2000 and that it was a winner and/or finalist in twelve major screenwriting competitions. I was not hired to ghostwrite "Paul Blart: Mall Cop" and only recently started my Scriptghost service."

UPDATE: A Google search turned up this blurb from Catalfo in praise of screenwriting analyst Robert Flaxman:

"I just got home from Canada and received some good news...MALL COP is one of eleven finalists out of more than 2500 entries in the Final Draft Big Break International Screenwriting Contest!

We're five for five in competitions so far! Thanks again for your exceptional guidance and direction. You've made me a much better writer."