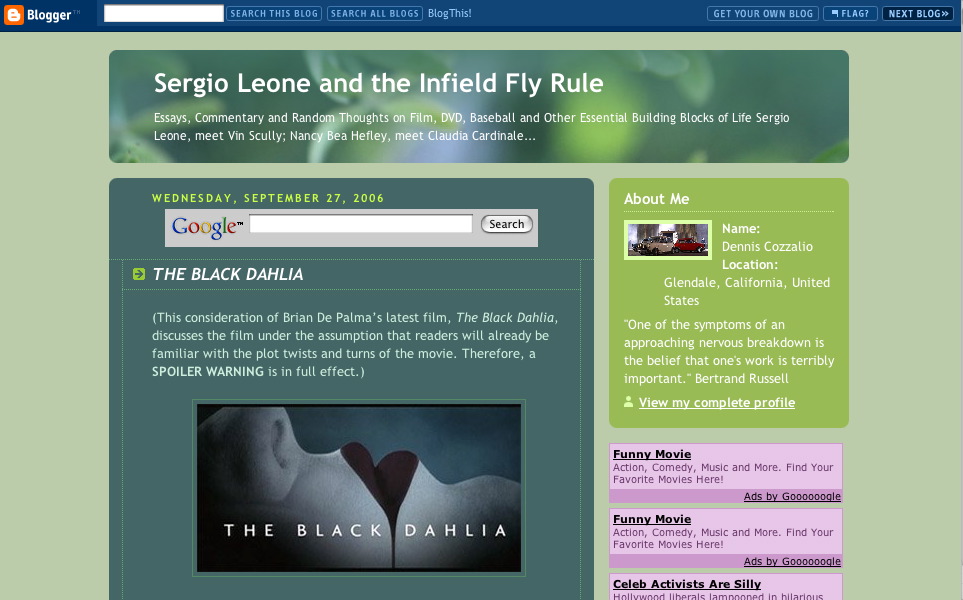 When I noted last week that I see films and film criticism as two sides of the same coin ("The unexamined film is not worth watching"), I was trying to imagine what it would be like if the conversation about movies (whether academic study, criticism, or casual after-movie talk) ended with the final credits. What if the movie was just over and you never thought about it or discussed it with anyone again? It's unthinkable, about as likely as the prospect that movies themselves -- storytelling with moving images -- would cease to exist.

On his newly snazzified (i.e., attractively redesigned) web site, David Bordwell has a piece (from 2000) analyzing the different ways we talk about movies: in ordinary conversation, reviews, and study; what needs they serve, their different methods and goals, and what they have in common. All of them contain an evaluative component ("I loved it!"), and are meant to communicate something about the experience of watching the movie. (I might question whether this applies to certain applications of "film theory," however -- stuff that's not really intended to convey ideas, or be read or understood even by other academics; it's just meant to be published. Job security, you know.)

Bordwell notes that criticism and academic study are more likely than ordinary conversation or daily newspaper reviews to put films in a historical context and to provide analysis of how they do what they do. Read the piece. I was especially delighted by his conclusion, in which he compares the in-depth analysis and appreciation of fans to that of academic study. I think he's right -- which is the source of my enthusiasm for certain intelligent and enthusiastically analytical movie blogs.

Speaking of which: Dennis Cozzalio, whom you must know as the owner and proprietor of Sergio Leone and the Infield Fly Rule, has a terrific overview of critical approaches taken to Brian De Palma's "The Black Dahlia," wherein he puts his finger on something that I think captures why I love good film criticism as much as I love movies. Dennis quotes from a splendid and passionate review by Matt Zoller Seitz, before exploring his own response to "The Black Dahlia." He writes:

What’s fascinating to me in reading a review like Matt’s, as a self-avowed, but not uncritical or all-forgiving, member of the De Palma camp, is the degree to which it is utterly convincing—that is, a compelling, understandable, no-bullshit analysis of the film from his distinct point of view-- while being so divorced from my own experience and conclusions. Where Matt locates zeal and energy in the formal aspects of "The Black Dahlia" that proceed on to artistically engorge the film for him and flush it with meaning, I saw a film that lacked exactly the urgency that he and others have found to be so abundant in it. To my heart and mind, "The Black Dahlia," despite its considerable craft and obvious serious of intent, feels listless, indifferent, and disconnected from the film noir tropes, character conflicts, and even the meticulously reconstructed 1940s-era Los Angeles (shot entirely on sets in Bulgaria) it so tantalizingly recreates.

What Dennis describes is exactly what I get from the best film criticism I read, and illustrates why I've always felt a good critic's verdict is the least interesting thing he/she has to say about a particular movie -- or a director or a genre or a double bill or a movement or a national cinema...
Advertisement