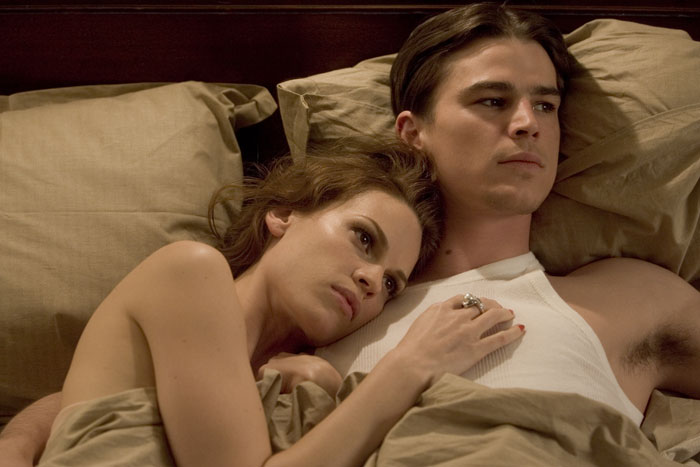 An attempted "Chinatown" shot from "The Black Dahlia."

I've been holding back my thoughts about Brian De Palma's "The Black Dahlia" since I saw it at the end of July, and now (especially after ten days at the Toronto Film Festival) those thoughts are more distant and disorganized than ever. I had intended to review the movie for RogerEbert.com, but that proved to be nigh impossible -- I've just been too busy with Toronto and other stuff, and I found the movie rather flat and ininspiring, so I didn't feel passionately motivated to write about it. (I'm still in Toronto as I write this.)

So, I'm going to offer just a few general comments (including some mild spoilers about particular shots and sequences), and then I'd very much like to hear your comments about the movie.

As I think back on the film, I'm surprised to find that the predominant color I associate with it is a rosy pink. Not black. Not blood red. But a mild color that Vilmos Zsigmond has used in his peculiar pastel palette for the film. That's not what I expected of a De Palma film of James Ellroy's "The Black Dahlia," but there it is. And somehow that characterizes what I think is wrong with the movie: After the first hour or so, which seems like a good set-up for a De Palma extravaganza, it grows pale and indistinct. From the start it's too controlled, rarely risky or dangerous. By the end, lots of people are getting shot (in pretty unimaginative ways for De Palma), just so it seems the filmmaker can hurry up and get the movie over with. Things fall apart. I didn't feel like De Palma cared about the picture anymore at this point, and so neither did I. You can feel the filmmaker losing interest in his own movie.

The set-pieces: The discovery of the Dahlia's body is a bravura shot that belongs with De Palma's best. It comes when you don't expect it -- during a shoot-out on the next block over, involving LAPD dicks Bucky (Josh Hartnett) and Lee (Aaron Eckhart). The camera cranes over the building up to the rooftop and, far below, away from the gunfire in mid-morning sunlight, we see a woman pushing a baby carriage toward a naked, segmented corpse in the grass. From here, we see the body shortly before she does -- but this seems to have nothing to do with the gunfight scene we've just been lifted out of. The woman's panic and horror is witnessed from this distant aerial vantage point, as she screams in alarm (and, with a nod to "Potemkin" and "The Untouchables," temporarily abandons the stroller). It will turn out, of course, that the shoot-out has everything to do with the Dahlia; we just don't see it yet.

My favorite scene is a bizarre dinner at the home of the wealthy, dotty, and undoubtedly corrupt Linscott family -- a twisted, hot-house outgrowth of something from "The Big Sleep" (1946). Bucky has met the movie's apparent femme fatale, Madeleine Linscott (Hillary Swank, smoldering in a way I've never seen her) at a lesbian nightclub, and gets invited home to meet the parents and little sis. These people are beyond eccentric -- they're the inbred (literally or figuratively) and insane products of high society. And what makes the scene (and particularly Fiona Shaw's unhinged performance) so wonderful is that, at the moment it's taking place, you have the feeling the movie could go just about anywhere from here -- tonally, narratively, cinematically. Unfortunately, the rest of the film is a long, slow, dispiriting downhill slide.

When Bucky goes to rendezvous with a shady character on a marble staircase, you know you're in for a multi-level set-piece. Lee is up above, struggling over the ballustrade with William Finley ("Phantom of the Paradise"), while Bucky is on the stairway, halfway between salvation and damnation. It's a set-up that's repeated back at the Linscott home, but to no particular effect.

The image that stays with me most when I think about "The Black Dahlia" isn't from the film itself, but from another De Palma film: "The Fury." I see a melding of Fiona Lewis spinning in the air, and John Cassavettes flying apart in all directions.

P.S. I'm distressed to report that Mark Isham -- a composer I usually like (especially his work for Alan Rudolph's "The Moderns," which I love -- has contributed two terrible unoriginal scores this year: a distractingly dull piece that lifts wholesale from Jerry Goldsmith's brilliant, last-minute music for "Chinatown" (trumpet and rustling strings) ; and the bombastic music for "Bobby" -- which caused some at the Toronto press screening to hiss his name when it appeared at the end of the film.