"For me, the border between feature films and documentaries has always been blurred. 'Fitzcarraldo' is my best documentary and 'Little Dieter Needs to Fly' is my best fiction film. I don't make such a clear distinction between them -- they're all movies."

"Aguirre, the Wrath of God" was the first Werner Herzog film I ever saw, back when it was released in the United States in 1977. It was one of the first films I ever reviewed, too (for my college newspaper, the University of Washington Daily). All I knew about Herzog at the time was what I'd read in an extraordinary profile by Jonathan Cott in the November 18, 1976, issue of Rolling Stone, which portrayed Herzog as a mad visionary in search of new images, not unlike the obsessed outsiders at the heart of his movies.

I couldn't stop staring at the haunting photograph that surrounded the article, from (as I recall) such films as "Signs of Life," "Even Dwarfs Started Small," "Aguirre," "Kaspar Hauser" and "Heart of Glass." They certainly didn't look quite like any movies I'd seen before. And essential to the spectacle was the knowledge that Herzog had gone to remote and exotic places in order to capture these images and bring them back into the cinema. They were unquestionably photographical realities (imagine Herzog speaking that phrase), not optical tricks created in post-production. The boat in the tree in "Aguirre" -- the one the feverish characters could no longer recognize as real -- was an actual boat in an actual tree, not a miniature or a matte painting. Even the photographic effects -- the time-lapse clouds flowing through the mountains like a river around boulders in "Kaspar Hauser" "Heart of Glass"; or the high-speed "ski-flying" (high-altitude, long-distance ski-jumping) footage that allowed Walter Steiner to float through the air in "The Great Ecstasy of the Sculptor Steiner" -- were actual recordings of real-world phenomena.

The overwhelming feeling I got from seeing "Aguirre" for the first time (at the tender age of 19) was that it was a film about a megalomaniac made by a megalomaniac. Certainly, as has been well-documented since, Herzog and Kinski were two sides of the same coin. "Aguirre" was their first film together and they made four more -- including "Fitzcarraldo" (1982) and "Cobra Verde" (1987), which again took them to remote and treacherous locations.

(Today, knowing what we know about Herzog's self-mythologizing quest for "poetic truth" rather than documentary realism -- including writing speeches and giving explicit direction to the "actors" in his documentaries -- I can't help but wonder how much of Herzog's and Kinski's on-set fireworks, as chronicled in "My Best Fiend," were deliberately staged for the cameras and shaped by narration.)

As for "Aguirre," it struck me that the quests of the title character and the director are nearly identical, both men seeking to conquer the Peruvian jungle and find El Dorado, the bountiful source of elemental gold for one, cinematic gold for the other. In the movie, the Spaniards are defeated by the rain forest and their own greedy, imperialist and religious obsessions. But the film itself stands as testimony to Herzog's triumph over the landscape and its perils. Herzog's alter ego, Don Lope de Aguirre/Klaus Kinski, winds up defiantly alone on a spinning raft manned by masses of tiny monkeys, proclaiming dominion over history, biology and geography. But Herzog himself transcends the story and returns from the jungle, and the edge of madness, with a masterpiece.

"OK, it's a masterpiece, but does that mean I have to like it?"

That was my friend Julia Sweeney's reaction to re-watching "Aguirre" in preparation for the Cinema Interruptus session at the Conference on World Affairs (see "Shooting the rapids with Werner Herzog (Part 1)"). Of course, nobody is required to "like" any film, masterpiece or not, but I was a little taken aback because Julia and I had become close friends over "Aguirre" (and, particularly, Robert Altman's "Nashville") in college. She had a gorgeous framed poster of "Aguirre" that was prominently displayed every place she had lived for the past 30 years. And yet, five years ago, she had revisited the film and seen it through newly skeptical eyes.

OK, she said she felt while watching it again then, I get it already! "Aguirre" seemed to her belabored and obvious, a Hitlerian metaphor as heavy as the bulky cannons the Conquistadors are lugging over the mountains in the opening shots. I hadn't seen the film for a good 25 years, and I understood her exasperation, but I didn't think that was the most fruitful approach to this particular film, in which conventional modes of storytelling, structure, character, performance and thematic development -- while still present -- are subordinated to the rhythmic presentation of the images themselves. In other words, as I told Julia, "It's a trip movie." (As opposed to a Wim Wenders film, which would be a road movie.) 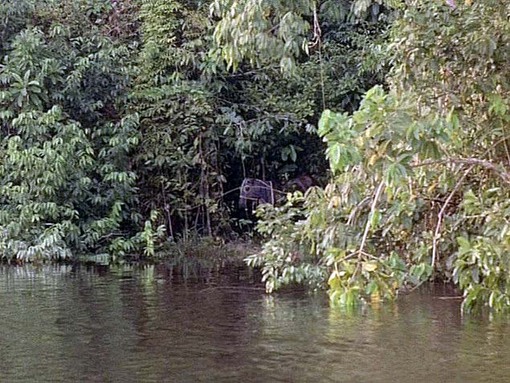 The reason I mention this is because Ramin Bahrani had guided us through the conclusion of "Aguirre" the previous day. We actually wrapped a day early! Julia and I were supposed to conclude the Interruptus on Thursday, but what were we going to talk about now? CWA has a policy of not canceling programs, so the burden (of dreams) was thrust upon us. ("OK, throw another obstacle at us," I said to CWA Director Jim Palmer.)

I thought it might be a good idea to illustrate two of my previously stated hypotheses -- 1) that Herzog's movies are often about the struggles of Herzog to make the movie you're watching ("Aguirre," "Fitzcarraldo," "Grizzly Man," "The White Diamond," and so on); and 2) that the character of the megalomaniacal film director played by Herzog himself is essential to framing our perceptions of the films themselves -- by screening one of my favorite Herzog documentary shorts, the 30-minute "La Soufrière: Waiting for an Inevitable Catastrophe" (1977). 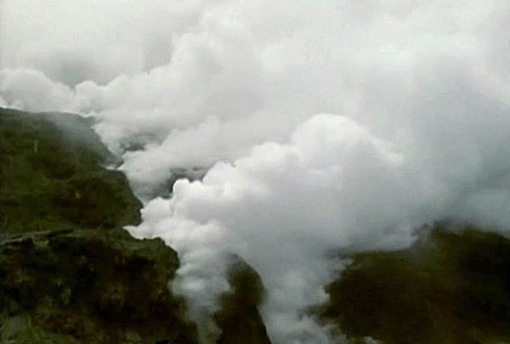 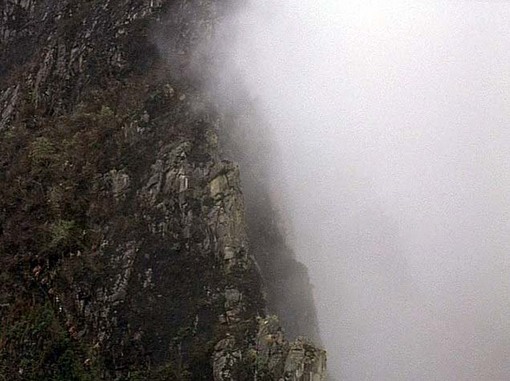 When a volcano on Guadeloupe began to erupt and was expected to explode "with the force of five or six atomic bombs," the island of Basse-Terre was evacuated. Herzog, being Herzog, immediately chose to go there to see what he could see, film what he could film. In "La Soufrière," then, there is no fictionalized Kinski character to act as Herzog's on-screen reflection -- just Herzog himself, in front of and behind the lens, and two cameramen (including the great Ed Lachman, who went on to photograph such films as "Desperately Seeking Susan," "Less Than Zero," "Light Sleeper," "The Limey," "The Virgin Suicides," "Erin Brockovich," "Far From Heaven," "A Prairie Home Companion" and "I'm Not There"). This may be the most explicit example of the Herzog film that is about Herzog's quest to make the film. (At Roger Ebert's suggestion, we ended the final session with a spontaneous showing of 1974's "The Great Ecstasy of the Sculptor Steiner," which was on the same DVD of Herzog shorts.) 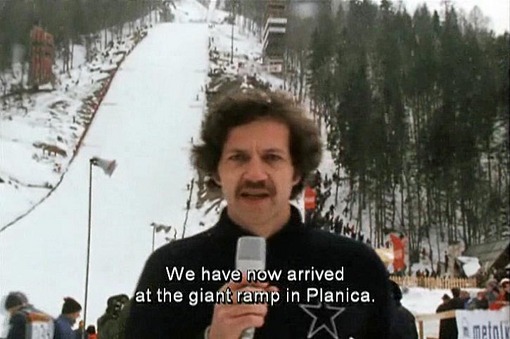 And this is where Julia raised the "elephant in the room" question -- one I'd been asked in private by others: Isn't it bad enough, she said, that expeditions like this one used slave labor (though some slaves were paid) and put people's health and even their lives at risk without Herzog doing some of the same things centuries later for the sake of a low-budget film? The local Indians recruited to work on the film were paid -- and actors who performed exceptionally strenuous or dangerous tasks were rewarded with a kind of "hazard pay" -- but there wasn't a lot of money to go around in the $300,000 budget (especially when you consider that the opening shots alone involved more than 400 actors and extras).

Knowing that what you are seeing is "real" is essential to the experience of viewing "Aguirre" -- and so is the moral and ethical queasiness that comes with the territory. Herzog spoke of the "compact" between himself and his cast and crew, but how dangerous were the perils he described enduring, on-camera and off-, and how well did the participants understand them? These are fair questions -- even necessary ones -- and I don't know the answers.

Evidently, no one was sacrificed on the altar of art during the making of "Aguirre, the Wrath of God." Herzog did say, however, that Kinski fired a gun at a hut in which some extras were playing cards and blew off a man's finger. That's not the same thing as the "Twilight Zone: The Movie" helicopter accident that beheaded actor Vic Morrow, but it raises similar moral issues. 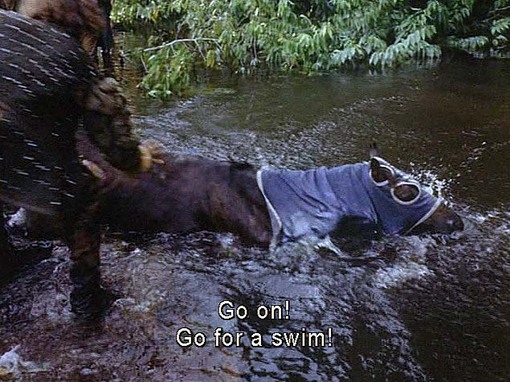 And what about the horse on the raft who bucks and kicks, falls down, and is pushed overboard into the river? Herzog said the first fall was induced with a sedative; Kinski was told to act as if he was striking the horse just as it fell. But as Julia observed, you know there was no SPCA monitoring aboard this raft floating down an Amazonian tributary in 1971. 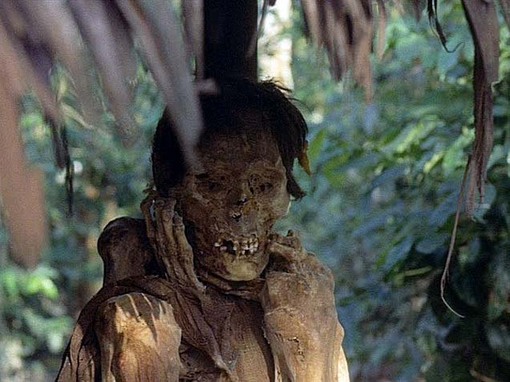 Herzog had left a couple days earlier, but even if he had been asked these questions directly, you can never quite tell for sure how much he embellishes and exaggerates for the sake of a good story. For example, he said that his brother found the mummy above in Mexico and flew with it to Peru, strapping the preserved corpse into a seat on a commercial airliner, much to the consternation of the other passengers. Funny anecdote, but does anybody really believe an airline would allow a mummy a seat in coach? Forget about the overhead compartments, the fellow would have to be stowed as cargo (and he certainly wouldn't fit beneath the seat in front of you).

That's beside the point, though. It's part of the legend...

P.S. Julia described her 33-year relationship with "Aguirre" as being like a love affair -- exciting and eye-opening at first, ripening into love, then separation and breakup. But after the experience of last week, she said, she's has learned to re-appreciate him. She just doesn't want to see him again.