What makes a movie bulletproof? 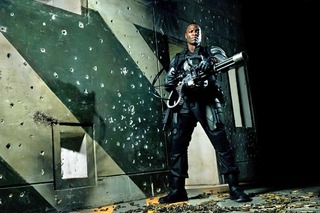 OK, who's ready to see the new movie about a gastroenterologist named Joe?

One of my favorite tree-based movie critics, Ty Burr of the Boston Globe, explains why you won't be seeing many reviews of "G.I. Joe: The Rise of Cobra" before it opens (Paramount isn't pre-screening it for critics) and wonders who cares -- about the movie or what critics think of it?

Movie critics are put on earth first to alert you to good movies you might otherwise miss, then to cut through the PR fog and consider the actual worth of a given film (depending on what, exactly, it hopes to achieve). With certain types of movie -- typically smaller, more ambitious fare attended by people who regularly read reviews -- a critic can mean the difference between a successful run and an early DVD release. But blockbusters? In most cases, we're BBs bouncing off the hide of an elephant....

I can think of a few critical pile-ons that helped speed a big studio movie's demise -- "Gigli," for one, and "Dr. Seuss' The Cat in The Hat." But the former arrived in theaters awash in weeks of lethal pop-culture buzz, and the latter's crassness was so dissonant with the tone of the original book that family audiences were repelled. The negative reviews, in both cases, were an entertaining sideshow and little more.

As a longtime pro, Burr has a realistic view of the role of critics and the role of marketers in the release of wide-release motion pictures. The studio salespeople hope that critics will help put some momentum behind their movie -- but they also know they might not. If they have a picture that they know people with knowledge and experience in movies aren't likely to go for, what's the advantage of screening the picture for them in advance? Well, it's this: Not pre-screening the movie (for the press or the pubic) is usually a sign that the studio itself thinks the movie isn't going to play well.

That's the old way of thinking, at least. It used to be standard operating procedure to screen a film -- a professional courtesy on all but the few pictures that the studio expected to dump after meeting its marketing obligations for the opening weekend. Fair game: In exchange for seeing the movie in advance of opening day (to meet their deadlines), critics agree to hold their reviews until the movie has actually started showing to the paying public. Well, neither side holds up their side of that bargain anymore.

If the studio flacks really aren't sure what they've got (or just need to show they'd done due diligence) they'll sometimes sneak in a critic for a confidential pre-release opinion, so they can reassure their bosses: "Yeah, we showed it to a critic and he hated it and said he thought everybody else would, too." In the last few years, by choosing not to screen more movies in advance (usually inexpensive comedies and horror films), the studios have been trying to reduce the stigma formerly associated with non-press-screened films. Burr describes the approach for "G.I. Joe":

Paramount spokespeople are saying they want to protect their new action extravaganza from the kind of nuclear reviews "Transformers: Revenge of the Fallen" received. "We want audiences to define this film," in the words of studio vice chairman Rob Moore.

[...] "G.I. Joe" is "an expensive and, for the studio [Paramount], risky attempt to establish a new franchise, one based on a toy that has never really had the cool-factor of Optimus Prime and his pals. So in a sense they're right to be wary.

But don't audiences always "define" movies -- at least in the days and weekends surrounding their initial release? Movies don't fail because they get bad reviews; they usually flop because -- whether they're any good or not -- the first audiences to see them don't particularly like them, and/or ticketbuyers never show up in the first place because the marketing and advertising hasn't motivated them. (The trick is to making a movie "bulletproof" is to make it something people they feel they have to see in order to have an opinion to talk and text and post about this week[end]. Social currency is the best kind of income.) When a movie with major studio muscle behind it hits or dies it's not because of the critics' reviews -- it's because of the audiences'. But critics' reviews come from people who've already seen the movie and the majority of ticket sales from those who haven't yet (unless they're coming back to see it again).

So, it's not like reviews are telling audiences what to think. Like the critics, they responding to the movie experience they're given. When a potential franchise movie is not screened in advance for the public (the weekend before opening, or at late screenings the night before), you know the studio's pre-release testing has indicated that critics and audiences are going to share a less-than-enthusiastic reaction to it.

The irony now is that texting and Twittering and Facebooking make managing the "buzz" more difficult than ever for a studio to control. Critics like Ty Burr will have their reviews online within hours of the first public showing Friday morning, so people will still have access to the reviews before Friday night, and many will already have heard about it from friends who attended opening day matinees. By not screening "G.I. Joe" for critics, Paramount is buying the movie a few more hours of "audience definition," but that's about it. Everybody -- critics and moviegoers-- are going to be spewing their "G.I." tracts electronically on opening day, and at that point it's out of the marketers' hands. The movie's on its own.