"We want information!" The Arrival of The Prisoner

Here's just what you've been craving: Twelve minutes and 19 seconds of stopping, starting, slowing down and gabbing (I mean, breathless commentary) over the one-minute, 47-second title sequence that introduces each episode of the cult-classic 1967-68 British science-fiction / spy TV series, "The Prisoner," starring Patrick McGoohan.

I was possessed by the need to do this -- just for myself -- while (re-)watching the entire series again on DVD and becoming mesmerized by repeat viewings of the opening. It sucked me in every time. I hadn't seen the show since it aired -- on PBS? -- in the late 1960s or early 1970s, and this time I was endlessly fascinated and delighted by the sheer sixties-ness of it all -- the camera set-ups, optical gimmicks (zooms galore) and cutting techniques that epitomized the era.

Do you want more information about "The Prisoner"...?

A former (?) espionage agent (McGoohan, following up on his stint as the title character in the show "Danger Man," or "Secret Agent" in the U.S.) is kidnapped and taken to an eerie pastoral village where everyone is mysteriously cheerful (in a Stepford-like way)... and under constant surveillance. He is Number Six, and he is a tough nut to crack. As he insists every week: "I am not a number! I am a free man!" Only he's not, because he's being held prisoner in this pastoral Victorian / "Alice in Wonderland" lunatic asylum (offering plenty of opportunities for zany satire of the world at large), where in each installemnt a new Number Two tries to coerce or trick him into divulging certain... information. 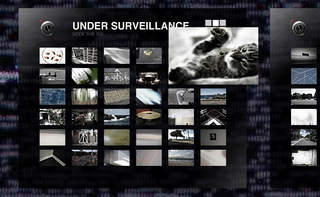 I put this together for my own amusement (and as practice for future projects), but I really got into it, as you will see, and enjoyed myself immensely. I'm not even a very knowledgeable "Prisoner" geek, although I did check out the most prominent of many fan sites, "Six of One: The Prisoner Appreciation Society" which tempted me to geek out almost as much as I did over "Twin Peaks."

Word is that Jim Caviezel and Ian McKellen are starring in a six-part television remake of "The Prisoner," which has its own teaser site here: "Seek the Six." Be patient. It takes a while to "initialize." After that, I couldn't tell you what the hell is happening.

Oh, and that white blob, the signature image of "The Prisoner," is some kind of roving surveillance device. Nicknamed Rover.

Enjoy. Be seeing you.