Watching movies from the inside out 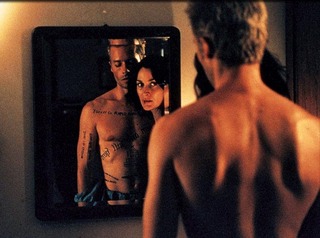 "Well, watching a film by Godard is more or less like any other aesthetic experience, in that you're able to go back and forth, inside and outside, at the same time--watching/ thinking, thinking/watching." -- Richard Brody, interview with Miriam Bale (2/23/09)

Which is more important in criticism, journalism and journalistic movie criticism: objectivity or transparency? OK, trick question. It's a false dilemma.

I admire critics who strive for the attitude that every movie starts with a blank screen, because every movie does, to some degree. In that respect, pre-existing opinions aren't relevant. The evidence of what transpires on that screen is all that matters. On the other hand, I don't think it's quite honest, or necessarily desirable -- or even humanly possible -- to possess significant knowledge or experience with movies and to put it all out of your memory every time you see a new one.

If you're just trying to lock yourself inside this one movie, not bringing yourself and everything you have to it, you're as ill-equipped to deal with the as the protagonist of "Memento," adrift in a present-tense vacuum. Often the experience of a new (to you) movie will depend on your familiarity with other movies from the same filmmakers, genre, period, culture, etc. So, I've always been more of a transparency guy, myself: I try to own up to my biases and preconceptions, while leaving myself open to having them overturned by any individual picture. I love surprises at the movies -- and most of all I love it when a move upends everything I expected or thought I knew about the filmmakers involved: Heath Ledger in "Brokeback Mountain," Colin Farrell in "In Bruges"...

Reviewing, and to some extent, all film criticism, is a process of reporting (selecting, organizing) as well as analyzing. I've been thinking about this after reading a piece by Gina Chen at the Nieman Journalism Lab site: "On transparency, objectivity, and the near occasion of subjectivity." I've argued in the past that the appearance of objectivity (like Fox's reductive definition of "fair and balanced" as an either/or equation) is a (self-)deception, a destructive illusion/delusion -- harmful to the reader, the writer, and :

Back in the old pre-Web days, we pretended the goal was avoiding the near occasion of subjectivity, not true objectivity.

We, as journalists, did things to make sure it didn't appear that we had opinions, or beliefs, or baggage from our own lives that might impact what stories we told or the telling itself. In our effort to appear objective, we didn't cease to feel things or believe things. We just refrained from telling our readers what we thought and felt and believed. And, somehow, we thought that would make us objective. [...]

Did I try to be objective? Sure. Was I always objective? Probably not. There's no way to tell. We journalists get around that concept by salving our egos with the adage: If I've ticked off both sides, I've done my job. But in reality, does that make sense? Is making all your sources mad really a measure of success? Couldn't that just mean you did a horrendous job and failed to capture the essence of the story?

What I didn't do is be transparent.

Now, upon reflection, I realize that was wrong. By not telling people what I thought or felt or believed, I may have been avoiding the near occasion of subjectivity, but I wasn't being a better journalist. I wasn't building trust with readers. Refraining to tell readers where I was coming from didn't make me objective. It just failed to make me transparent.

Of course, as Chen notes, less experienced readers will equate transparency with bias, but that happens regardless. "Focus on transparency, and greater objectivity will follow," she writes. "Journalism as an industry needs people with passion, opinions, beliefs. Having these feelings -- and expressing them -- won't harm objectivity. If anything, it will enhance it."

She's right. "Objectivity" is not the same as having no view of your own -- much pretending there are only two mutually exclusive points of view. It means considering the evidence clearly. That's the critic's most important job, to describe and analyze the movie accurately, based on what is there on the screen. Secondarily, it's to describe the interaction between the writer and the movie. Chances are, the critic will form some kind of opinion about what the movie does and the overall worthiness or success of the endeavor, but a judgement is not all that important. What does anybody's positive or negative opinion matter if you don't know how and why they reached it?