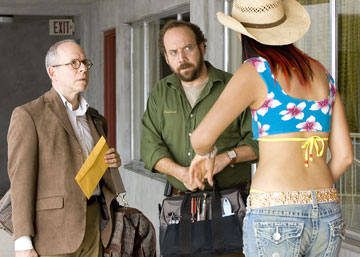 Bob Balaban (left) plays an Evil Film Critic in "Lady in the Water."

"Reviews should be objective. Keep your opinions out of your reviews!"

-- actual comments from alleged "readers," sent to Roger Ebert and just about every other critic on every planet in the solar system (except Pluto)

(NOTE: If the above quotation does not bring tears of laughter to your eyes, do not let those eyes tarry here.)

People love to quote William Goldman's famous saying about the movie industry, which is that "Nobody knows anything." Most people who quote it have absolutely no idea what it means. The phrase is tossed about as being the wisest thing ever said about showbiz, and fortunately for those who are doing the tossing, it's just vague enough to sound true under almost any circumstances. So, it is thought to be "right" more often than a stopped analog clock, which is said to tell the correct time twice a day. (The clock is not "right," of course -- it just coincides with external events that allow someone to perceive it as being correct if you check it at certain times. It's a coincidence. That's an important distinction.)

I think perhaps the most profound meaning of "Nobody knows anything" (out of all possible meanings) is not just that nobody knows what will be a hit, but that the audience does not know what it wants. They'll tell you what they want, but if they could really articulate it or quantify it, and if the studios could create some kind of quality control mechanism to manufacture it, Disney and Paramount and Warners and Fox and Sony would be as financially successful as, say, oil companies.

When I worked at Microsoft, editing the CD-ROM and web movie encyclopedia Cinemania, I and my colleagues at Music Central had a difficult time explaining to the marketing folks the qualitative differences between people's (I'm sorry -- consumers') relationships to movies and music and, say, their relationships to their kitchen appliances. We liked to say that movies and music were not refrigerators, but that didn't help. Marketing still didn't know what we were talking about.

But here's the thing: Some people choose refrigerators (or cars or spouses) with their analytical brains -- by comparing features, reading test lab results, consulting reviews, and making lists of pros and cons. Some people look for movies or music this way, too, but it doesn't work as well since you can't check the stats on the cameras or microphones or guitars to find out which makes better movies or music. Other people don't care at all about stats or track records or anyone else's opinions -- they may not be able to describe in advance what they want, but they know it when they see it, and will immediately buy or drive or boink or even marry it when they do.

People are happy to tell you how they make decisions about what movies to see. They invariably insist that they are never swayed by advertising or reviews, that they rely almost entirely on their own inerrant predictive judgment and taste, and the recommendations of their trusted friends and family. Somehow, this applies even to those who go to the theater on opening night with their trusted friends and family. It's not so much that they're deliberately trying to fool pollsters; they're just like all of us -- really good at fooling themselves.

But people don't like to be fooled by others -- they don't want to look like suckers, especially not to themselves. So, there's a cultural (or maybe just human) instinct to want to justify time and money spent. People are far less likely to trash the movie if asked about it as they emerge from the theater (and they still have the ticket stub in their pocket) than they are a few days later, when they are more likely to look back on it as a trial-by-fire bonding experience, and yowl about how hilariously awful it was to sit through. Plus, who wants to admit they paid 10 bucks to see "Lady in the Water"? Only after a little time goes by does it become fun to talk about how bad it was.

When it comes to film criticism... well, most people know as much about it as they do about the self-defrost mechanisms in their freezers. They will say, for example, that all they want is an "objective" assessment of the movie, without understanding that there can be no such thing as "objective" criticism of art or entertainment -- which is inherently subjective. It's the critic's point of view that matters, coupled with reporting skills. Moviegoers will also say they want to know the story -- but don't give too much away. I'm always amazed at how much of the story they want to know -- pretty much everything except the ending in many cases. Some people really don't like surprises -- not in their dinners, and not in their entertainment. As a critic, I am not willing to oblige them, and prefer to describe little more than the premise and then talk about the imagery, the characters, the music, and so on.

And, of course, movie fans (and just about everybody considers himself a movie fan) demand some kind of quantifiable scale of measurement -- stars, thumbs, letter grades -- to fool themselves into thinking this represents a definitive (and "objective") form of evaluation. In fact, these gimmicks are just clumsy attempts to quantify non-quantifiable judgments. Roger Ebert has, on occasion, gotten so frustrated with people who quibble with him about stars or thumbs that he tells them they shouldn't even bother to read reviews. (They probably wouldn't understand them anyway.)

A movie audience that has no use for film criticism, doesn't understand it or realize that it has nothing to do with predicting box-office success or failure, and even less with predicting what you will think of a movie (most critics don't know you), can hardly be expected to understand that movie reviewing is only incidentally a consumer guide -- or that the vast majority of film critics I know never even think about influencing audience behavior. They're critics because they like to write about movies.

As the illustrious Los Angeles Times/Bloomberg poll indicates, most people claim not to read reviews before they see movies (they've already made up their minds). So, if they read reviews at all, when do they read them? My experience from my years at newspapers and Cinemania and RogerEbert.com (though not as scientific and objective as Times/Bloomberg) is that many people who like to read reviews actually prefer to read them, and discuss them, after they've seen the movie (especially after watching them on DVD).

Again, that's a small segment of the moviegoing audience -- but it's also the most passionate, informed, intelligent and influential. Outside of a few film societies, the most stimulating discussions about movies are happening at online blogs with comment threads such as (just to name a few) girish, Sergio Leone and the Infield Fly Rule, and The House Next Door -- and, I hope, Scanners.

In 30 years of writing movie reviews, from my college newspaper to the web, I've learned a lot from readers. One of the things I've learned is that film criticism is whatever a particular reader likes, and is not what that reader does not like. That hasn't changed, and never will. Really. You could do a poll on it.