Watching (and listening to) Fincher's Girl

"The Girl With the Dragon Tattoo" has been a 2005 book (the first part of the late Stieg Larsson's "Millennium Trilogy," translated into English in 2008), a 2009 Swedish-language feature film by Danish director Niels Arden Oplev, and a 2011 English-language Hollywood movie. In 2012 it will also become a DC graphic novel, but my feeling while watching the new movie was that the material had reached its apotheosis as A David Fincher Film.

I haven't read the novels (I've paged through some of "Dragon Tattoo" in English), but even fans I've talked to don't make any claims for Larsson as a great writer (albeit in translation), and the Swedish movie version struck me as little more than a straightforward work of adaptation: "OK, we're going to take this story and put it on the screen." It did that, but except for the presence of Noomi Rapace as the titular Lisbeth Salander I didn't find it very exciting to watch.

So, I wasn't particularly looking forward to seeing another version of "The Girl with the Dragon Tattoo." I was only curious because of Fincher, whose "Fight Club," "Zodiac" and "The Social Network" I think very highly of. I saw the Fincher movie The Way It Was Meant To Be Seen™ (in Sony 4K Digital Video projection!) and, I admit, I was literally rocking out in my rocking theater seat from the first riffs of Trent Reznor and Atticus Ross's biting cover of Led Zeppelin's "Immigrant Song" -- an icy blast of frigid air over a deep black credits sequence in which our Girl Lisbeth endlessly shape-changes into various forms and substances -- all of them integral to who she is. ("Aaaaaaaaaaaaaaaaaaaah! Aaaaaaaaaaaaaaaaaa! We come from the land of the ice and snow, from the midnight sun where the hot springs flow..." Too on-the-nose? Maybe. But the squall of sound practically rips open the screen.) 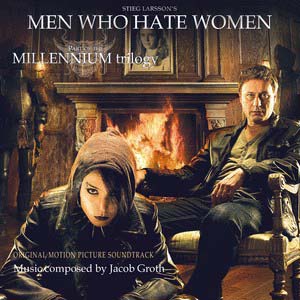 Indeed, the many thrills I got from watching Fincher's "Tattoo" had (as is often the case with me) very little to do with story or character development. I already knew the story, which I felt was more clammy and gruesome than emotionally involving or resonant. (I got the feeling the makers of the Swedish film were wallowing in, and perversely grooving on, all the grotesque and (apparently) random torture and abuse -- even when the victim was Lisbeth.) When I found out the original title of both novel and film was "Men Who Hate Women," that seemed to me a more appropriate, if less commercial, characterization of what I'd seen. The violence of the story is so cruel and twisted that, especially in the first film, I frequently felt it was more about generic misogynist Hate than this particular Girl, as tantalizing and compelling a creation as she may be. Because my oh my, there sure are a lot of men here who really, really hate women -- blackmailers, rapists, incestuous sexual abusers, pedophiles, sadists, torture-killers... And some of them are Nazis, besides. But, of course, you probably already had an inkling of that, as did I.

So, I have no desire to compare the two film versions (honestly, the first one hasn't stuck with me), except to say that I slightly prefer Rooney Mara as Lisbeth because she's just as much of a tough nut as Rapace, but also seems a little ethereal -- more lithe and bruiseable, and maybe a touch less masculine on the androgyny scale. (Her signature jet-black hair is just as severely cut, but not as extroverted as Rapace's brazen, porcupine-mohawk.)

No, what I want to ruminate about, as usual, is the way the movie looks and sounds. First of all, I don't think any film has captured the feeling of snow as vividly as this one. Look at the way the flakes spin around in various directions (some of them in focus, some of them not), so that you really feel like you're not just looking at snowfall, but that you're out in it. Yeah, OK, it's snow. But it's really vivid snow, Mrs. Presky!

I've long been impressed with Ren Klyce's sound design in Fincher's films (see this post), and never more so than in "Dragon Tattoo." I've never heard the sound of snow the way it's presented here, the mixture of muffled noises and wind in the trees -- and the roar of it blowing in your ears. The shot approaching Henrik Vanger's Hedeby Island manor feels like a sense memory.

Martin's house, perched high on a rocky cliff, is buffeted by winds, its floor-to-ceiling glass doors and windows whistling and sighing if they don't close securely. You get the feeling, from the sound alone, that you're sealed up inside a pressurized glass chamber.

Then there's the Reznor-Ross score, which sometimes consists of little more than snarls of scratchy static alternating between the far right and left channels. It's an unnerving, inventive effect, not like conventional "scoring" at all -- and you may well think there's some electronic gadget just off screen that's going slightly haywire. That's fine. Like the interwoven score/sound design for "No Country for Old Men," it just pulls you deeper into the textures of the movie.

Above: A moment of assymetry. Vanger notices Harriet's full plate and empty seat.

Nobody else makes films quite like David Fincher (watch the extras on the "Fight Club," "Zodiac" and "The Social Network" discs if you want to know more). Earlier in his career there were times (the through-the-carafe-handle shot in "Panic Room" comes to mind) when he sacrificed coherence for "Look Ma, it's digital!" goofiness, but he's never been one of those onanistic whiz-kids who don't know how to compose an image (with a camera and/or a computer) or care about spinning a coherent story. I don't know that "The Girl With the Dragon Tattoo" has a terribly coherent story, but that's Larsson, but that's the raw material. What I do know is that Fincher is one of the most precise filmmakers (some would call him obsessively finicky) since Kubrick, one of his major influences.

You wouldn't necessarily know it from watching the movies themselves, but not only do Fincher and his sound editors create new line-readings by punching in phrases, words and syllables; he and his editors create shots and performances within shots using digital bits and pieces. A New York Times Magazine slide show called "How to Assemble a 'Dragon'," walks viewers through a four-minute, time-shifting sequence, a few excerpts from which I quote below. Note how the movie internalizes the principles of continuity grammar without strictly adhering to them.

"We've moved these two guys from where they were previously," [editor Angus] Wall said. "And now they have drinks, so it's a bit of a time jump. Editing is all about compressing time so it gives you the illusion of continuity, even as we take out the 'boring' bits."

Exactly. This flashback-studded initial meeting between Blomkvist (Daniel Craig) and Vanger (Christopher Plummer) doesn't take place in "real-time." These jumps are easily accepted because of how they are intelligently connected through the flow of montage and overlapping dialog/sound.

"Here you're seeing three different shots glued together," [editor Kirk] Baxter explained. Fincher will shoot dozens of takes with the camera in the same position, then the editors will piece together their favorite performances with digital split-screen effects...."

This is something I loved about "Zodiac" -- and that I didn't even know about until I watched the DVD supplements. In Fincher's films, you may be watching sophisticated digital imagery and not even know it. The filmmakers aren't interested in "digital" or "effects" -- only in how these tools can be used to make the film they want to make.

In voice-over, the elderly Vanger [Plummer] remembers telling Harriet, "Give me a few minutes" -- and his voice is matched to an image of the young Vanger [Julian Sands] saying much the same thing. When the sound editor, Ren Klyce, noted that the dialogue wasn't precisely synched, Baxter said, "Well, they're actually saying different sentences, but as long as we keep the voice slightly ahead, then we stay in the rhythm."

Also note that the stuff from the past (1966) has an amber tint to it, while the present-day look is harsh black and blue. Fincher told the Times he wanted a "very warm and familial" look for that last day before Harriet vanished. "I was setting up an expectation for how we would see the past." [That "golden" vision is later overturned.]

In the flashback, Vanger is interrupted by an accident on the bridge connecting the island to the mainland. A precept of film editing is that, while you can show a scene from different angles, you will disorient viewers if you cross an invisible dividing line, say, suddenly switching the point of view from a character's left side to his right. "These edits here are very unconventional," Wall said. "This doesn't cross the line. But it's right on the line."

There are still those who profess no understanding of how the 180-degree rule comes into play in narrative filmmaking, and I don't know what more to say to them, except that the term "rule" needn't be taken absolutely literally. It's as much a "rule" as the auteur theory is a "theory."

The editors cut to a reverse shot of the accident, taken from the bridge's other end. "It's all supposed to tie into the division of sides: here is the bridge, there's a crash in the middle, the family is on this side, and they're on that side," Baxter said. "This is the story of how Harriet couldn't have gotten out."

The reverse-angle serves several purposes. We clearly see the blockage on the only bridge to and from the island, and feel what it's like for Harriet to be stuck on the wrong side of this lifeline, unable to escape from the deadly trap the island (and her family) represents.

Back in the house, the Vanger family eats dinner, but Harriet is absent. The head-on composition of this shot mirrors the accident on the bridge....

Like Kubrick, Fincher loves symmetry, and these shots (approaching Vanger's manor, on the bridge, down the dinner table) emphasize the rigidity of the family's history, from which there is also no escape. Everything looks elegant and manicured, but the superficial perfection masks horrible secrets.

In the attic, Vanger tells Blomkvist that Harriet's killer taunts him by sending him pressed flowers on his birthday every year, just as she used to do....

Decades' worth of framed dried flowers fill the room. This isn't second-unit footage -- Fincher took an hour at the end of a shooting day to film a hundred or so floral close-ups himself. Baxter and Wall then picked their favorites. Wall said: "You use complementary shots. If something is at a slight right angle in one shot, it's nice to follow it with something that has a slight left angle."

This illustrates the kind of perception that can distinguish a fluid film from a mundane one. The choice of angles, and how these shots are cut together, makes all the difference in the world.

The 4:30 train leaves, and Blomkvist isn't on it. This is the 83rd shot in the sequence... Baxter says later sequences with Salander are edited at a speedier tempo: "Her decisions come faster; she's thinking at a higher level." In other words, editing not only requires intelligence; it can create a sense of it onscreen.

Thank you. Whether or not you're consciously aware of it, you can always feel when a filmmaker has (or lacks) a meaningful sense of time, rhythm, pacing.