"Tattoo" could have been an effective and disturbing movie, an exploration like "American Gigolo" of the perverse shores of eroticism. It has moments that give promise, that seem to suggest an understanding of its characters -- and then it dissolves into a routine kidnapping with lots of screams and a little kinkiness. Rarely have I seen a movie during which I was more acutely aware of the moments when the director was doing exactly the wrong thing.

The story is about the deeply buried implications of tattoos. It stars Bruce Dern, in a very good performance as a man who was scarred by a cruel, perfectionist father. His childhood made Dern a man whose puritan attitudes toward sex mask a fear and hostility toward women. The movie opens in Japan, where Dern, an American soldier, witnesses a parade by one of the Japanese secret societies of tattoo, artists. Dern is fascinated and undergoes an elaborate full-body tattoo.

Back in America, he runs a tattoo shop in Hoboken, and one day he is hired to draw some phony, wash-away tattoos on fashion models. He's strongly attracted to one of the models (played by former James Bond girl Maud Adams). She's intrigued by Dern and makes an advance. Dern is torn between his sexual attraction to the woman, and his distaste for her lifestyle, her four-letter words, her live-in boyfriend. She visits his studio. He tries to explain what tattooing means to him: When it is applied with full seriousness, it is one person's mark of possession upon the other. "Some women," Dern muses, "enjoy the feeling of being totally possessed."

We can guess where this is leading. And unfortunately, "Tattoo" grows most predictable just when it should take chances and reach for psychological insights. Dern kidnaps Adams, takes her to his isolated family home, drugs her and diabolically places his "mark" upon her by covering her model's body with a full-length tattoo.

This leads, inevitably, to the movie's key scene, the one in which Adams regains consciousness, looks in a mirror, and realizes for the first time what has been done to her. How will "Tattoo"’s director, Bob Brooks, handle this? He blows it. He has her start screaming, crying, hitting Dern, calling him an SOB. It's a completely predictable scene that dissipates all the tension. How would a greater director have handled the scene? Perhaps with a long silence as the woman regards herself in the mirror.

The Rest of the movie is just dumb horror-film stuff. Adams tries to escape, Dern catches her, Dern continues his tattooing; Adams tries to stab him with a shard of broken mirror. It's all a retread of that British Hammer horror film "Scream and Scream Again", where every time the victim awakened, another limb had been amputated.

"Tattoo" opens so promisingly that its crucial scenes are doubly disappointing. Because the film's first hour makes it clear that "Tattoo" is not intended as just another creepy horror film, the failure of the conclusion is all the more disappointing. If only the filmmakers had taken the time to really think through the psychological possibilities of their film's climax, instead of just cranking out another captive woman potboiler. 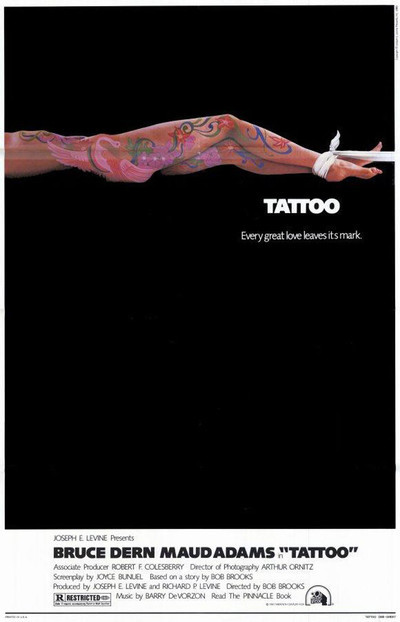