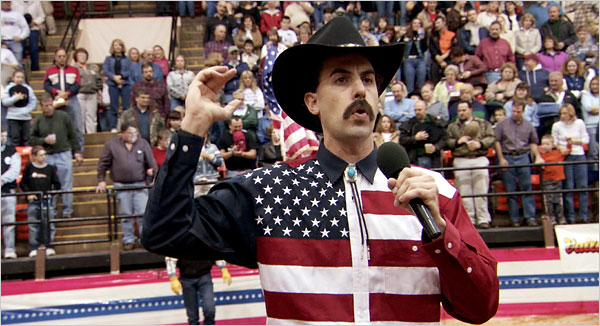 The New York Times headline about all the political films in this year's TIFF was: "At the Toronto Film Festival, Liberal Politics As Usual." David M. Halfbinger of the Times cites Barbara Koppel's Dixie Chicks documentary and the fictionalized doc about the assassination of George W. Bush ("D.O.A.P." or "Death of a President") in his round-up of evidence to support his thesis that Toronto "has been all but overrun with films attacking President Bush or the protracted war in Iraq — in subtle ways and like sledgehammers, with vitriol and with dispassionate fly-on-the-wall observation."

This may well be true (even though, as some would quickly point out, it is in the New York Times); I don't know because I haven't seen most of the films he lists (yet), though I'll probably get to a few. But I'm mildly surprised that he doesn't mention the two most scathing attacks on the Bush regime that I've seen so far: Guillermo del Toro's "Pan's Labyrinth" (in which the Franco Fascists fight the local insurgents) and Sacha Baron Cohen's and Larry Charles' "Borat: Cultural Learnings of America for Make Benefit Glorious Nation of Kazakhstan." OK, Halfbinger does mention "Borat," but mainly to say that Michael Moore was at the midnight premiere, where the projector broke down.

Before I forget to mention it explicitly: Yes, I loved "Borat."

If George W. Bush is the most hated figure in Toronto (and I think it's safe to say he is, though Moore ought to at least be in the running -- not so much for "Fahrenheit 9/11" as for the fact-challenged portrayal of Canada in the loathsomely fictitious "Bowling for Columbine"), then Borat is surely the most loved. And "Borat" (the movie) is the most devastating and hilarious semi-documentary indictment of American cultural and political hegemony imaginable.

It's all right there in the title: "Borat: Cultural Learnings of America for Make Benefit Glorious Nation of Kazakhstan." This is a movie about a nationalistic idiot, who believes his country is by far the greatest on earth, despises rival nations (like rotten ol' Uzbekistan), fears and hates ethnic minorities (mostly Jews), and believes women are merely "vagines" with legs. (That term rhymes approximately with "machines.") Borat is a reporter for a Kazakhstan TV station who travels abroad to learn about American culture for the benefit of his beloved home country. At first the joke is that Kazakhstan is a backwards developing nation, where attitudes about human rights are still stuck in the muck of the barbarian Dark Ages, and the technology hasn't advanced much further.

If you've seen Borat on HBO (and I've only seen a little), you know that Cohen's schtick (like that of his other dim-witted alter-ego, Ali G), is to appear in character with other people who aren't in on the joke, and to make them look as stupid and confused as Borat himself. He succeeds, though the joke isn't exclusively on his candid-camera victims. ("Borat" is too sweet a guy for that -- even his bigotry is rooted in ignorance, not in a malicious heart, which is more than can be said for some of the American frat boys and rodeo patrons he interviews in the movie.)

I don't want to give away laughs (people have already been making references ever since the movie first started screening in LA) -- and I even recommend you skip the trailer. But allow me a few general observations:

The movie is fair to its targets. One can only assume that anybody who appears on camera is either an actor or had to be let in on the gag later on, or they wouldn't have signed releases. The movie doesn't necessarily have to make up a lot of this stuff, like the gathering of southern socialites at a mansion near Secession Blvd. in Birmingham (a dinner party that must have Luis Bunuel guffawing in his grave). It gives some characters enough rope, or screen time, to hang themselves. But when, for example, Borat gets a rodeo crowd riled up and then goes "too far," we see the people in the crowd who, until then, had been encouraging and humoring this strange little foreigner (and enthusiastic supporter of "your War of Terror"), as they begin to realize something's not quite right.

The movie is not "an equal-opportunity offender," as another piece of New York Times let's-whip-up-a-non-story spin tried to cast it last week. In fact, its targets are carefully chosen and very specifically delineated. It might have been a braver movie (and far more offensive and, you know, "controversial") if Borat had been openly anti-gay or racist against "chocolate faces" (or even "vanilla faces" -- he uses both terms). But when it comes to gays and blacks, he's a good liberal. Borat doesn't quite understand homosexuality even when it's right in front of (or behind) him. He has no qualms about taking part in naked male-on-male wrestling. He's down with the young urban black crowd (a shrewd commercial move at the very least: "Teach me how to be like you"), and the movie goes out of its way to romanticize and sentimentalize his relationship with a fat black prostitute. This is not a complaint or a compliment -- it's just what's there, in the movie. Like "The Aristocrats," which was gleefully scatalogical in its attempts to offend, the really risky stuff is avoided. In Borat's case, that's a good thing, because the laughter this movie inspires deserves the tired adjective "liberating," and "Borat" should be seen by as many people as possible. Those of us who do, may even recognize ourselves.

And except for a mild scene at a Pentacostal hoedown where people speak in toungues, religion is barely mentioned. The movie is not even close to being anti-Semitic (even if the character of Borat is). The scene where he stays in a bed and breakfast run by a nice elderly Jewish couple is brilliant and funny not because of any slurs against those "shape-shifting" Jews, but because of Borat's comically overwrought paranoia. (He reminded me of a Turkish friend of mine who once panicked, only half-facetiously, when he realized the Seattle diner we were eating in was run by Greeks. "They want to kill me!" he exclaimed in a stage whisper.)

Borat, and "Borat," will be funny for at least as long as anybody remembers there were, and are, bigots anywhere in this world.