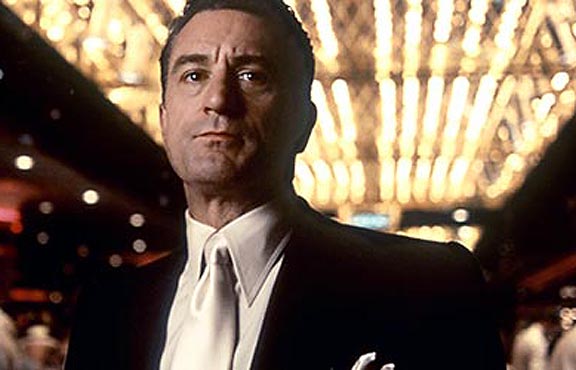 From my piece on Sin City in the Movies at MSN Movies:

The world has other gambling meccas -- Monte Carlo, Atlantic City, Reno -- but none as storied or mythologized as Las Vegas, an American dream-zone strategically located in the arid wasteland between Hoover Dam and Hollywood. The neon oasis is a concrete mirage: The closer you get, the more real the place becomes, but when you reach out to grab it, it slips through your fingers anyway. A surreal amalgamation of landmarks historical and imagined (Egypt, New York, Camelot), it rises out of shimmering heat and dust, a dazzling C.B. DeMille monument to profligate waste and the proposition that anything can be purchased or accomplished for a price.

Vegas is a Hollywood movie made corporeal, a surreal experience built on sand, powered by electricity, riches and promises of desires fulfilled. The electricity comes from the dam, the money comes from the odds that always favor the house, the desires come from the human heart (as well as a bit lower and to the right). But how sinful can sin be in a place called Sin City, where everything sinful in the outside world is overtly or tacitly permitted? 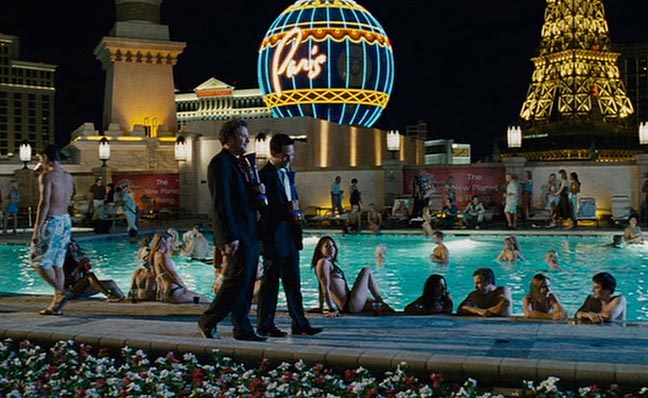 Guy Trip to Vegas: "Knocked Up." Somewhere between LA and Hoover Dam, anywhere and nowhere.

Like Disney World, it's hard to imagine anybody actually living there. For most, it represents a transitory state, impossible to sustain. Few care to wonder what happens to all that money, all that lust, any more than they wonder how much of that water from pools and fountains simply evaporates into the desert air. Win or lose, what happens in Vegas stays in Vegas. It's where dreams, realized or unrealized, evaporate as soon as you leave town. [...]

"Bugsy" (1991): The original Vegas dream, or the movie version of it according to Barry Levinson's elegant gangster picture, belonged to Bugsy Siegel (Warren Beatty), the mob boss who thought of himself as a movie star. With his business partner Meyer Lansky (Ben Kingsley), he set out to recreate a desert Eden on a strip of highway that would later become the Strip. The Flamingo Hotel was Siegel's "Greed." His ambitions went ruinously over schedule and over budget, plagued with costly obstacles and delays — not unlike his turbulent relationship with Virginia Hill (Annette Bening), the bit actress he met on the set of a George Raft movie. "Look," he explains to his financial backers, "What do people always fantasize about: sex, romance, money, adventure ... I'm building a monument to all of them ... I'm talking about a place where gambling is allowed, where everything is allowed." All of it based on the miracle of cheap electricity and air conditioning. It was visionary. [...]? 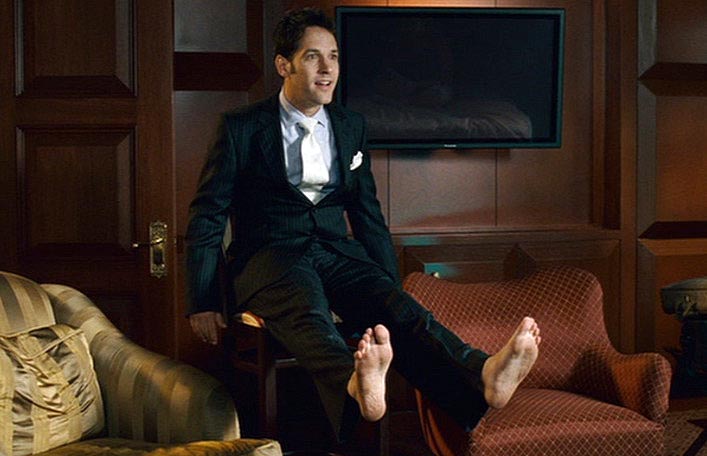 "Knocked Up" (2007): When Tony Soprano took peyote in Vegas, he had a breakthrough and shouted, "I get it!" into the desert sunrise. Not long afterward, he couldn't exactly remember what he got. When Ben (Seth Rogen) and Pete (Paul Rudd) take mushrooms in Vegas, they get freaked out by the realization that a chair is still a chair, even when there's no one sitting there. Both of these are part of the mescaline — er, masculine — rite-of-passage known as the Vegas Guy Trip... [...]

"Fear and Loathing in Las Vegas" (1998): The Ultimate Trip. Hunter Thompson observed that Las Vegas was not a good town for psychedelic drugs because extremely menacing vibrations are all around. On the other hand, it's a place that makes hallucinogens superfluous because overstimulation is already built into the experience. Thompson (Johnny Depp) and his attorney (Benicio Del Toro) spend most of their time downtown (this is 1971, long before the air-conditioned overhead hallucinogenic animation of the Fremont Street Experience) where Circus Circus-freakiness includes gigantic neon cowboys, coupons for free shrimp cocktails and swirling carpet that bleeds up the walls. (See "The Cooler" for more downscale downtown action.) The other Vegas is up on the Strip where Debbie Reynolds does her tribute to "Sgt. Pepper." "This was Bob Hope's turf. Frank Sinatra's. Spiro Agnew's," Thompson observes. "The place fairly reeked of high-grade Formica and plastic palm trees. Clearly, a high-class refuge for Big Spenders." Again, the drugs aren't really necessary -- adrenaline, endorphins and sleep deprivation will bring on the same symptoms. So will this relentlessly bad-trippy movie, which makes you feel like you've been up for a week past your crash time.