Part I (before I saw "Trash Humpers")

Google "Netflix" and "Trash Humpers" and the first result you'll get is this: Netflix - Watch Trash Humpers. The second result (dated October 20, 2010) is an article from Filmmaker Magazine headlined: "'Trash Humpers' too trashy for Netflix?" Note that the headline is in the form of a question, because the article/post itself consists almost entirely of a promotional announcement from Drag City, the DVD distributor of "Trash Humpers," claiming that Netflix was refusing to carry the video, which (according to Amazon.com) was officially released September 21, 2010.

The press release was a useful publicity stunt (what do you expect for a Harmony Korine movie called "Trash Humpers"?), but how much truth it contained I haven't been able to determine, and I haven't been able to find any comments from anyone at Netflix. In its widely reprinted (but evidently unquestioned) October manifesto, Drag City said:

... Netflix has deemed the content of Trash Humpers to be too inappropriate for their subscribers to make it available to them. From their perspective, they may be right: they certainly know their subscribers and their tastes, and might have a better awareness of their breaking point (we thought that might have been fuckin' Avatar). So it's hard to fault them. But we do love a challenge! We don't expect Netflix to carry anything they don't want to, for whatever reason, but it reminds us that this is the price paid when we allow one entity to control the lion's-share of content distribution. 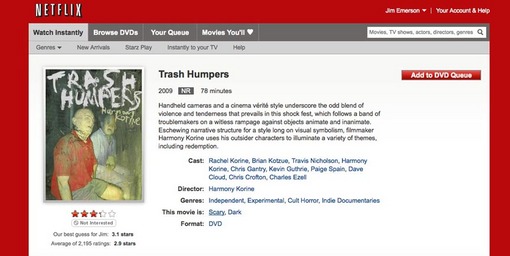 A month later (November 23, 2010), Drag City posted another notice on its web site announcing that "Trash Humpers" was available through Netflix: "Yep, that's something to be thankful for - we live in a nation where the proper amount of screaming and crying will allow your marginally offensive material to take its place with all the other work of its ilk (like the even exists). Hallelujah! Praise effin' Jeebus! God is gay, burn the flag! And pass the freakin' stuffing!"

"Banned by Netflix" may be the best promotional gimmick the distributor could come up with for reaching the video's target audience. Exploitation marketers have been using these same sales techniques as long as movies have been around: Make the product sound taboo (see "Banned in Boston"), imply that it may be hard to see, and you've whipped up people's natural and unnatural curiosity.

But did Netflix really refuse to carry "Trash Humpers" -- or even hesitate to do so -- because of its content? Drag City pointed out that the company carries Harmony Korine's other movies, and films that "feature more full-frontal nudity, on-screen sex, violence, rape and/or murder" than "Trash Humpers," including "Antichrist," "Irreversible," "Henry: Portrait of a Serial Killer" and the "Jackass" movies. (Heck, they even have the Paul Morrissey/Andy Warhol pictures "Trash," "Flesh" and "Heat" (1972) on Netflix Instant.) Netflix also carries "Salo, or 120 Days of Sodom," "Taxidermia" and "Asian Extreme" titles ("Audition," "Oldboy," "The Wayward Cloud," "The Isle," and so on), so I find it very difficult to believe the company would refuse "Trash Humpers" for content reasons. (It's not even listed as violent or sexual, just "scary" and "dark" -- which could be a characterization of the pseudo-VHS image quality.)

So, maybe there was a bureaucratic snafu. Maybe Drag City made the whole thing up. I don't know. But unless anyone has any proof (like a verified letter from Netflix outlining reasons for rejection, followed by another letter of acceptance), I guess I will have to remain skeptical.

Meanwhile, however, the "banned by Netflix" meme continues to spread, even though the film has been available there for months. In the current Slate Movie Club, Karina Longworth of the LA Weekly, who put "Trash Humpers at the top of her 2010 ten-best list: "That said, of course part of the fun of choosing Harmony Korine's barely released, banned-by-Netflix, shot-on-VHS (!) provocation as my film of the year was knowing that it wouldn't be a common choice and hoping that it would start a conversation." That's swell, but let's not include "banned by Netflix" in the conversation, since we have no evidence that's what happened.

UPDATE 1/14/11: Got this e-mail from some Nashville filmmakers who explain the "banning":

"Trash Humpers" was never banned from Netflix. Last year Netflix changed the number of "saves" an indie title needs to justify the cost of buying DVDs from a distributor. [For those unfamiliar with Netflix: You can show interest in an unavailable movie, and reserve it for when it becomes available, by clicking the green "Save" button.] Netflix is trying to switch over to more streaming content for their instant watch library; Upping the number of saves was part of this process.

We know this because like Korine we're also independent filmmakers from Nashville who only recently secured a Netflix release for our film "MAKE-OUT with VIOLENCE." Like "Trash Humpers" we were under the impression that getting our film onto Netflix would not be a problem. It was only after Netflix changed their policy toward smaller films that we had to actively campaign for people to "save" the movie onto their Netflix queue with the hope that eventually it would become available. Also, like "Trash Humpers" we started a FB page to raise awareness about the issue - "Trash Humpers" had 691 people supporting their efforts, we had 570. We were never told what the number of saves was raised to but since both our film and Korine's now have Netflix distro, we assume it was probably around 500.

Our film is available thru Netflix starting next Tuesday, January 18th.

The idea is... well, it's pretty much right there in the title. A group of Harmony Korine's pals in Nashville got together, dressed up like old people, and smashed things (with the emphasis on consumer electronics and babydolls). Also, they shrieked and laughed and pretended to fellate plants and hump trashcans and sometimes trash itself. It's like watching a homemade VHS made by some anonymous high school gang of mildly pervy, goofball friends to amuse themselves one weekend when they had nothing better to do. And they're so self-satisfied with their naughty, naughty doings! Surely it must be some kind of statement (like the equally ostentatious, 100-percent bogus, Korine-scripted "Kids") about End of Times in Which We Live. Is it also the longest 78 minutes of my moviegoing life, or did it just seem that way? I can't say for sure.

Like all of Korine's output, "Trash Humpers" is art presented as trash or the other way around -- in this case, something like pretentious 1980s "performance art" captured on VHS. (Korine says it's not really a movie, but "more like an artifact. You can imagine it being buried in a ditch somewhere.") To me, it felt like watching somebody with a fondness for gross-out humor (perhaps deliberately disregarding John Waters' distinction between good bad taste and bad bad taste) try to make a "Pink Flamingos" for 2010 -- something Waters long ago claimed he wasn't interested in trying to do himself. Or an interminable softcore Henry Jaglom film (most of the performers are less-than-gifted improvisors).

So, that's about it for me. I think I found it more depressing than shocking or interesting. But, for what it's worth, Karina Longworth wrote:

Influenced by surveillance and prank videos but hardly haphazard (in fact, its nonaesthetic is the result of intricate design and careful production), Korine's faked relic about a separatist group of drunken, garbage-can-fetishizing, self-mythologizing miscreants is the ultimate twisted fairy-tale allegory for our decaying times. After vacillating on a No. 1, in the end I voted with my heart. And, no, I am not fucking with you.

"Faked relic" -- sure. But I wonder what difference it makes if it's haphazard or if "its nonaesthetic is the result of intricate design and careful production"?

P.S. For the record, my dog Edith hated it. She groaned and whined a lot, even though there weren't many four-legged mammals in it.