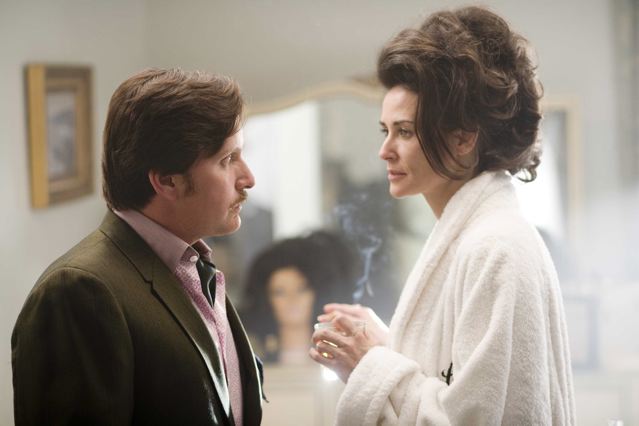 We're told that Emilio Estevez's "Bobby" takes place at the Ambassador Hotel in Los Angeles on June 5, 1968, but it feels like it was originally released back around then. It's "Earthquake" with the RFK assassination as the disaster. It's "Airport." It's "The Towering Inferno." A whole bunch of familiar actors play "colorful" characters swarming around the hotel, and their day will culminate in the death of a Kennedy. They talk about the movies -- new stuff like "The Graduate," "Bonnie and Clyde," "Planet of the Apes" (1968) -- but a retired doorman played by Anthony Hopkins explicitly invokes the model for "Bobby" and and its ilk: "Grand Hotel," the 1932 picture with Greta Garbo and an all-star cast. And "Bobby" treats the assassination as an event as strangely distant from its own present-tense as "Grand Hotel" was from 1968.

Sure, the requisite modern political parallels are present, as they are in virtually every film at the Toronto Film Festival this year. On the screen, on TVs in hotel suites, over the soundtrack, are actual speeches and sound bites from Democratic senatorial candidate Robert F. Kennedy, talking about how the country has lost its way in the quagmire of Vietnam, and championing rights for minorities and low-wage workers, etc., etc., etc. (It comes as a bit of a shock to remember that politicians were once articulate and sounded like they knew the meanings of the words they were saying.)

But why make "Bobby," which screened at the Toronto Film Festival as a "work-in-progress"? Why turn this traumatic national event into a Hollywood soap opera? The performances are fine for this kind of glitzy manufactured melodrama ("Where Were YOU When They Shot RFK?"), and on that level it's swell, trashy fun. It's just that the whole concept is inappropriate.

Christian Slater (maybe the weakest performance, as the villain) is a racist kitchen manager who makes Latino busboy Freddie Rodgriguez work a double shift, when he was planning to take his dad to see Don Drysdale pitch a record-setting shutout that night. Laurence Fishburne is a wise pastry chef who dispenses blueberry cobbler and speeches about how to cure racial strife with equal skill and generosity. William H. Macy is the liberal hotel manager who reprimands Slater for not giving the employees of the understaffed kitchen time off to vote. Meanwhile he's having an affair with Heather Graham, a hotel operator, even though he's married to Sharon Stone, the hotel beautician. Stone's two main customers are Cocoanut Grove headliner diva Demi Moore, a washed-up lush who's giving the final performance of a long engagement, and Lindsay Lohan, who's marrying her friend Elijah Wood, that very evening, to keep him from being sent to Vietnam.

Get the shape of things to come? Ashton Kutcher is a drug dealer working out of a room in the Ambassador who gives a pair of young Kennedy volunteers their first hi-larious LSD experience, while campaign coordinator Joshua Jackson thinks they're out driving elderly people to the polls. Helen Hunt and Martin Sheen are a married couple who are in town for what they hope will be that evening's victory party, but first they must work out some marital issues because she needs shoes and he suffers from seeing a psychotherapist. Meanwhile, Hopkins plays chess with his old friend Harry Belafonte in the lobby... It goes on like that, flitting from one mini-confrontation to another (dramatic or comic relief -- choose one). "Bobby" would like to be "Nashville," but it's pure Irwin Allen, not Altman.