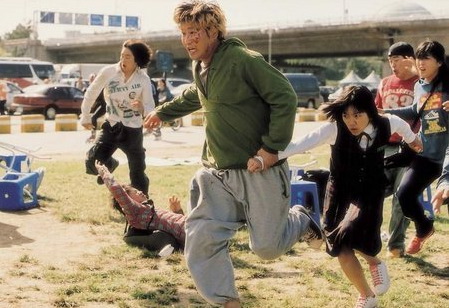 Take me to the river, drop me in the water...

"The Host" (or "Gue-mool," which sounds better) is a South Korean monster movie in which a mutant amphibious creature swims beneath the Han River, scampers among the girders beneath its bridges, prowls its sewers, and occasionally leaps onto its banks to grab some human souvenirs. The creature is just doing whatever it's bred -- or mutated -- to do, but the monsters who created it, and who mischaracterize the nature of the threat, thereby making the thing practically impossible to catch or contain, are Americans -- portrayed as the world's most aggressive exporter of bureaucratic incompetence and misinformation.

In the first scene, set in 2000, a U.S. military official in scrubs (Scott Wilson -- setting the funny/horrific tone for the entire movie) directs a reticent Korean subordinate to empty potently toxic chemicals into the Han. After all, it's a big river. By the end of the film, a Senate investigating committee finds that the U.S. bungled the whole thing, and then compounded the damage by covering it up. Imagine.

Of course, the lives affected by this particular adventure in imperialistic hysteria aren't Americans, but Koreans -- in particular, the comically fractured Park family whose patriarch runs a riverside refreshment stand. On the political as well as the horror/science-fiction level, this time it's personal. The marvelous creature (part squid, part gecko, part salamander, part sandworm, part vagina dentata, created by San Francisco's The Orphanage), snatches the youngest Park (a uniformed schoolgirl of 13), and the rest of the clan reunites to avenge her.

Director Bong Joon-ho shifts tones with quicksilver dexterity, cannily keeping the audience (and the film) just on the edge of losing its balance and splashing into the Han. Humor turns to horror and back again in a flash, while generic requirements are both fulfilled and cleverly overturned. Even the pathos works, because it's a little bit cock-eyed. How does the movie do all this? Must be something in the water...