TIFF: Death and the Madre 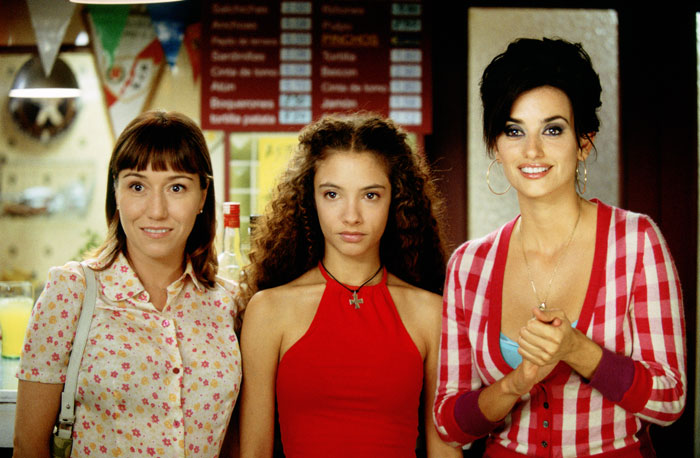 The dry east wind that howls through the little village in La Mancha where Pedro Almodovar was born, and where his latest film "Volver" begins, brings with it unease, fire and insanity. In the opening shot, it blows crisp dead leaves across marble graves, while women dust and polish the stones. Sometimes, they even come by to clean their own graves. It's just another housekeeping chore.

The opening shot ends with a period -- the grave of a husband and wife who died, together, in a fire fueled by those incessant winds. But, naturally, this is the beginning of the film, so it's not a period at all, just a semi-colon where we pause for a brief rest and then continue.

"Volver" (roughly translated: "To Return") is a magical film, but that magic is in the filmmaking -- not just the surreally supernatural events (presented with a Spanish matter-of-factness that recalls Almodovar's great cinematic ancestor, Luis Bunuel), but in the filmmaking itself. As the first shot announces, this is a movie about women and death. It's in love with women, and unafraid of death, which appears as a porous membrane through which people may pass without permanently abandoning the land of the living.

So a mother, dead for four years, hitches a ride in the trunk of her daughter's car, carrying a deceased aunt's green suitcase. When she insists her daughter unlock the trunk to let her out (because she's decided to come visit for a while), nobody really bats an eyelash. After all, who wouldn't be happy to see her mother, or her daughter, after four years' separation? The situation is less eerie or strange than warm and touching.

Men are peripheral in "Volver," and they aren't particularly missed. They scarcely matter, except as sources of irritation, or natural resources to be exploited (mostly off-screen) for income. Carmen Maura, as the mother, reunites with Almodovar for the first time since "Women on the Verge of a Nervous Breakdown" seventeen years ago, and we're as glad to see her as ghost-welcoming daughter.

Penelope Cruz, who is flat and dead herself in American movies, comes to life under Almodovar's direction, full of verve and vitality. She's also really funny. And she sings! (The Cruz of "Volver" is more woman than Tom Cruise could ever handle in his wildest dreams.) A pair of women in the film talk about their addiction to "trash TV," and how as they watch it they just feel worse and worse. That's what it's been like watching Cruz in American movies. (Compare her work in "Open Your Eyes" with the American remake, "Vanilla Sky.") I get the feeling that, if she's smart, she won't go back.

Let me share a nice passage from Almodovar's press notes that captures the atmosphere of the movie: "For the first time, I think, I can look at [death] without fear, although I continue to neither understand nor accept it. I'm starting to get the idea that it exists.

"Despite being a non-believer, I've tried to bring the character (of Carmen Maura) from the other world. And I've made her talk about heaven, hell and purgatory. And, I'm not the first one to discover this, the other world is here. The other world is this one. We are hell, heaven or purgatory, they are inside us. Sartre put it better than I."