TIFF: Behind the mask of horror 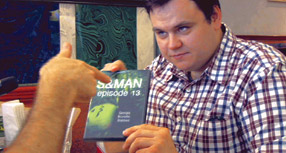 JT Petty's "S&MAN" (pronounced "sandman") is a little like "The Blair Witch Project" in that it starts off as a documentary about a filmmaker making a documentary, and then turns itself around on the viewer. (Also in the way it uses the web as an extension of the movie.) Petty himself has made transgressive horror films ("Soft Digging"), and he'd originally planned to make a doc for HDNet about a video peeping tom who got away with his crime because the neighbors he'd been spying on didn't want his footage made public if introduced as evidence in a trial. But (o, irony!) the peeper wouldn't agree to appear on camera. A person has a right to some privacy.

So, the movie Petty wound up making instead incorporates interviews with academics, psychiatrists, and underground horror actors and filmmakers that explores the line between horror and documentary, and the sado-masochistic aspects of both.

Professor Carol Clover, author of the seminal (sorry) "Men, Women, and Chain Saws" -- and some of the horror filmmakers themselves -- talk about their sensitivity to the mistreatment (or apparent mistreatment) of animals on the screen because, as Clover puts it, that feels to her like an "unmediated" experience. Footage involving humans, no matter how horrific, is still "mediated" because unless you can be certain -- and you rarely can -- that it's a genuine snuff film (like terrorists beheading their captors on the Internet), you can be reasonably sure it's not "real."

But that's exactly the safety zone some of these filmmakers want to eliminate, and what their customers want to buy. They want to feel like what they're seeing is, as one of them puts it, "a serial killer's home movies." Bill Zebub (say it out loud) makes relatively mild fetish films like "Kill the Scream Queen" and "Jesus Christ: Serial Rapist" (where the hole in the title character's hand is used for auto-erotic purposes) in Clifton, NJ. Fred Vogel (or Fredenstein), who trained under Tom Savini, created the August Underground series of realistic faux-snuff films. And Eric Rost... well, we're not so sure about him. He lives in his mother's basement in Queens and, at the time of the filming, has produced eleven episodes of something called "S&MAN," in which a woman is stalked -- on the street, at her job and beyond -- seemingly without her knowledge. At the end of each episode, after snuffing out her identity with voodoo-esque rituals, Eric himself kills her on camera.

Well, "kills." The idea is that you're not supposed to know for sure whether you're watching something genuine or not. (In the case of Rost's "series," it's pretty easy to tell because the victims just don't struggle like they really want to get away.) Still, it's a worthwhile subject, and one that's been explored in fictional films for years (Hitchcock's "Rear Window" and "Psycho" (1960); De Palma's "Hi, Mom!" and "Sisters"; Cronenberg's "Videodrome" -- just to begin with)

The "Be Black, Baby" sequence of "Hi, Mom!" may be the best example I've ever seen of a filmmaking pulling you in with pure technique (hand-held, black-and-white documentary technique) and then showing you something you might have thought you wanted to see, but realize you really don't. The viewer/voyeur watching the movie is violated even more than the people onscreen. To paraphrase one of the interviewees in "S&MAN" (and "Videodrome"), it's violence coming in directly through the eyes.

"Scream Queen" Debbie D, who sometimes makes "custom" videos for customers, indulging their specified fetishes, says she'd do almost anything on screen as long as it's "not X." She says almost all of the fantasies requested involve violence, not sex. Rost's dubious web site is wanttoseeadeadbody.com, and "S&MAN" asks: "Well, do ya, punk?"

I don't usually quote from press notes in reviews, but since this isn't a full-fledged review but festival coverage, here are slices of a statement from Petty:

In the second day of my interview with Carol Clover, I asked her if she thought documentary was as sadistic a form as the slasher horror film.

I never had to bring up the word "snuff" with my underground filmmakers. The conversation always came back to making onscreen death more painful to watch, more realistic. It was a sort of "method acting" of filmmaking. What if you're really sleep-deprived, gagged, and duct-taped? What if you're really beaten? What if you really don't know when we're filming? What if we use real blood? [...]

This movie... is about voyeurism, horror films, and mass culture. Most importantly, though, "S&MAN" itself becomes a movie about blurring the line between real and fictional murder. I hope nobody comes away from it feeling clean.

You may not want to read any further if you're interested in seeing "S&MAN." Nothing specific is given away, just clues about how the filmmaker wants you to watch the movie.

Where do you draw the line between reality and fiction, between the filmmaker and his persona onscreen? I couldn't study my subjects and not become implicated in what they do. I don't trust them, and an audience shouldn't trust me.