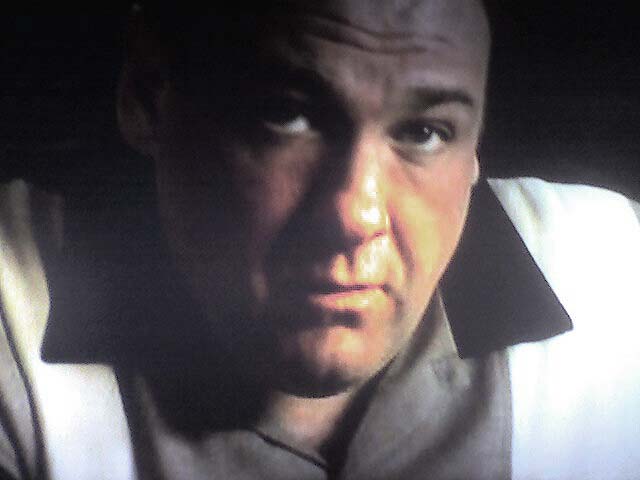 Meantime life outside goes on all around you. — Bob Dylan, "It's Alright Ma (I'm Only Bleeding)"

Have another onion ring. Pop the first DVD of Season One into the player and press "play." "The Sopranos" is... I'm not going to say "over." Think of it as complete at last, a perfect whole. It's finished but it's not over. Life goes on.

It's not uncommon for a long-running show to get self-reflexive in its final episode: "The Mary Tyler Moore Show," "St. Elsewhere," "Newhart," "Seinfeld," "Six Feet Under," to give a few famous examples. And no show has ever displayed more awareness of itself as a show than "The Sopranos." Not even "It's Garry Shandling's Show," the sitcom about being a sitcom. "The Sopranos" has always been a serial mob movie about being a serial mob movie in a culture where everybody's seen a lot of mob movies (and remakes of mob movies) and even low-level Jersey mobsters imagine themselves acting like the mobsters in the movies. And in its last seconds (which made my heart leap and had me laughing and crying at the same time), "The Sopranos" accomplished what I hoped it would, as I wrote earlier: "... I want [series creator David] Chase to come up with something I didn't anticipate, but which feels right for "The Sopranos." He's done it before. But now I'm afraid in a different way: I really, really want the ending to live up to the show."

It does. Perfectly, in retrospect. Just a second or two before the final shot I thought: "What if it ended here and now?" And it did. And it still surprisd the hell out of me. (I described a similar experience with Ramin Bahrani's "Man Push Cart" last year.) Episode 86, written and directed by Chase, toys with our expectations of what a final episode in such a TV series should or could be. It's been an exceptionally dark season, even for "The Sopranos," but instead of going darker as you might expect, Chase restores the balance with a blast of meta-comedy that recalls the show's first season.

As I mentioned in the previous post, the penultimate episode ("The Blue Comet") is Chase's tongue-in-cheek sop (and a fine sop it is, too) to the fans who want "The Sopranos" to go to the mattresses and behave like gangster movies are supposed to behave. We have Melfi reprising the last shot of "The Godfather" on Tony, and a couple hits that toy with the climactic whack-fest/baptism from "One." But the results were almost comically inconclusive. Bobby dies, but on a small scale (O scale, I believe), his fat carcass crushing a model train set-up, like those he loved to play with — a clever reminder that we're watching is a toy, a meticulously hand-tooled fantasy. (Resonant final episode title: "Made in America.")

And Silvio... he goes into a coma. A what? Tony spent the first part of the season in one of those; they can't pull that again. (Can they?) At the second-to-the-last moment you don't have somebody get hit and put them into a coma — you either kill 'em or you don't, right? Not on "The Sopranos." And you should know better.

(But if you've read this far, you're obviously a "Sopranos" fan and, what, you haven't seen the finale yet??? What's a matta wit'chu?)

Nearly every scene (with one notable exception) in the final hour is a study in anti-climax. Lots of short scenes, ending too soon, without resolution. The expected one-on-one confrontations are here — Tony and Janice, Tony and Sil, Tony and Paulie, Tony and AJ, Tony and Uncle Junior, Tony and a new shrink... — but they feel rushed or inconclusive, not the wrap-ups we've been conditioned (by other shows and movies) to want or anticipate. Lots of talk about dreams. Jokes about "these jack-off fantasies on TV" and "The Twilight Zone" and television writing. Sight gags like Tony and Carmella at Bobby's wake at Nuovo Vesuvio, off by themselves under a mural of a smoldering volcano, about to blow its stack. It's life and death on the streets of New Jersey, but there's domestic melodrama, too: Tony and Carmella are still parents and still reprimanding the kids every time they seem to be screwing up their futures, which is often.

The big sit-down with Phil Leotardo's people ends before anybody bothers to drink one of the bottles of water that have been provided for the occasion. In a dark wrecking yard warehouse that looks like the junk heap of Western Civilization, everybody walks away from the white plastic table without even raising their voices.

AJ's monstrous yellow SUV, a subject of moral ambivalence, blows up (something about the catalytic converter getting too hot and igniting some leaves) to the tune of Dylan's apocalyptic "It's Alright Ma (I'm Only Bleeding") from the death-of-the-martyrs ending of "Easy Rider" (another good transportation joke) and... he feels better. Because it's symbolic? Not really. Because, wow, watching things blow up is exhilarating — it's fun — especially when you escape just in time and can feel the heat rush. So, Chase gives us our explosion — but it's an anti-climactic one.

In a show stocked with plenty of villains, the Big Bad Guy gets his in spades. Bye-bye, grandpa Phil! It's another over-the-top joke about the ways movies dispatch grand antagonists. The badder they are, the more times they have to be killed. You know: They get shot and fall from a great height onto a flaming stake which falls over into a pool of sharks, and then the whole thing blows up. So, Phil gets whacked and then... it's sickening, but it's pretty damn funny.

So, all this (and the "Anticipation" ketchup bottle that won't put out) is telegraphing the final scene at the diner. That's right, Carmella doesn't feel like cooking (wha?), so the family is going to eat out. Tony gets there first. Looks across the room. Cut to Tony sitting on the other side of the room, as if he's seeing himself. Little Feat's "All That You Dream" is playing. Cling! Tony looks up. A woman comes in the door and heads to meet someone. Tony peruses the jukebox selections, mostly crappy '80s corporate rock: Heart's "Who Will You Run To," Journey's "Don't Stop Believin'" — and Tony Bennett's "I Gotta Be Me," for good measure. Cling! Tony looks up. A man in a USA baseball cap comes in and sits in a booth by the wall. It's getting close to the end of the hour now. Which song will Tony choose for his exit music? (Aside: In a special about the "Sopranos" music on Comcast On Demand, Chase and Steve Van Zant talk about Chase's idea of playing a lot of music from the '80s that Tony and Carmella would have listened to when they were going together, but Van Zant was horrified because that stuff was so shitty, and if you used good stuff from that time it wouldn't fit the show. They compromised.)

God help us, Tony plugs the box and it's Journey. Can't get any cheesier. Cling! On cue, the door opens and Carmella comes in ("Just a small town girl..."). "What looks good tonight?" "I dunno." Carm says Meadow is coming late because she had to go to the doctor. What?? Tony looks up.

Cutaway to the guy in the cap, who's just getting a cup of coffee. Three creams. He pours sugar into his cup. Carm: "You talk to Mink again?" Mink — that's Tony's lawyer, and Steve Buscemi's character in "Miller's Crossing" (who, in his one scene, provides the key to the whole movie). Looks like Carlo, who's gone missing, is going to testify against Tony.

Cling! Tony looks up. A tall man comes in and sits at the counter. AJ, right behind him, comes over to the booth and sits. The guy at the counter looks over his shoulder. AJ says something about onion rings, which as far as Tony's concerned are the best in the state. Counter Man, tapping on the counter, glances impatiently over his shoulder. Meadow pulls up outside, but has trouble trying to parallel park. She pulls out of the space to try backing in again. Cokes arrive. A couple in another booth laughs. Counter Man stirs a cup of coffee and looks around again. Something bad is going to happen.

There's some talk about AJ's new job, which he complains about of course. AJ reminds Tony that he once said we should focus on the good times. Tony doesn't remember saying that, but, "Well, it's true, I guess." Meadow tries to park again. Counter Man gets up and goes to the men's room. Yeah, you'd better think of Pacino in "One." Tony notices him go by. Something bad is going to happen.

A couple black guys come in. Meadow finally seems to get into the spot. Onion rings arrive. Tony says he went ahead and ordered some for the table.

Shot: Camera rises from behind Meadow's parked car as she gets out and heads for the diner across the street.

Shot: Sound of an oncoming car, which passes behind Meadow. She approaches the camera and moves past it on the left.

Shot: Three-shot of the table. Carm's munching on rings. AJ's still looking at the menu. Tony's flipping through the tableside jukebox selections. Cling!

How meta can you get?

Life goes on. Have another onion ring. Pop the first DVD of Season One into the player and press "play."