The silence of the monks 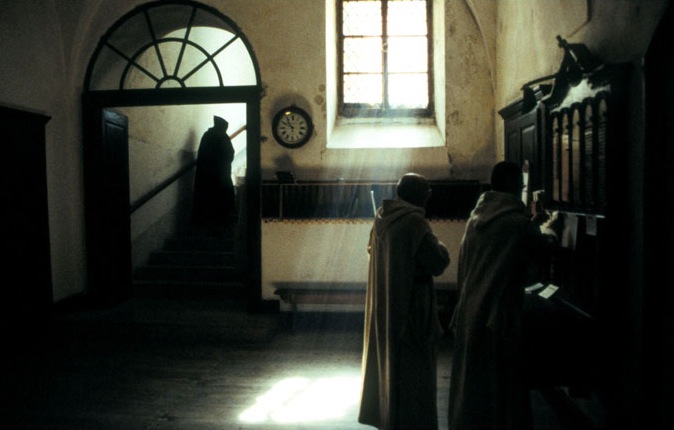 A theory of relativity: "Into Great Silence."

From my review of "Into Great Silence" at RogerEbert.com:

We get a lot of movies about noise these days: gunshots, screams, explosions, fist thunks, thunderous roars, revving engines, squealing tires and those deafening sonic swooshes that accompany nearly every corporate logo before the feature even gets started. But we don't experience many moments of silence at the movies (and I'm not just talking about the audiences). "Into Great Silence," though devoid of narration, musical score or much at all in the way of dialogue, encourages us to listen closely: to the sound of snow falling in the mountains, a nocturnal prayer whispered in a small wooden cell with a knocking tin stove, a bell rope pulled in a chapel. Nobody yells. Nothing detonates.

The images also open up to us gradually and quietly. We're not bombarded with fusillades of shots: "Look at this! Now this! Now this!" "Into Great Silence" unfolds with its own gentle, unforced rhythms, designed, as German filmmaker Philip Groning has said, to be less a "documentary" than a meditation.

Groning spent six months living with the monks of the eremitical Carthusian order at the Grand Chartreuse Charterhouse, or monastery, in the French Alps. He brought with him only a camera and basic sound equipment -- no crew, no lights -- to capture the daily lives, prayers and routines of this most ascetic of Catholic orders, which was founded by St. Bruno in 1084. The monks, who have taken a vow of poverty, subsist on very little. They pray aloud at times and sing solemn Gregorian chants, but they rarely speak, except on their Monday walks. If cinema had existed more than a thousand years ago, this is quite like what it may have recorded.

I must confess my fondness for contemplative movies of this sort. The less frenetic onscreen activity you are forced to endure, the more you're able to notice. And the form of "Into Great Silence" is ideally suited to its subject. The monks lead a regimented existence (you can see a typical weekday schedule, and learn about their history, at their official Web site, www.chartreux.org), but time is allotted for the introspection and reflection that are essential to their devotion. You're given the opportunity to contemplate details, including ones you may overlook in the rush and routine of your own everyday life.