'The Scream': Now more than ever 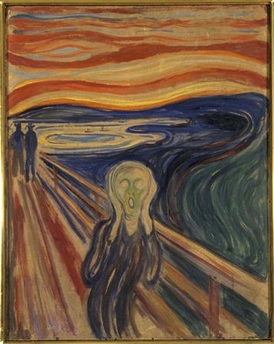 This pretty much says it all.

Edvard Munch's purloined "The Scream" has been recovered in Norway, more than two years after it was stolen. One of the signature images of our time (I always think of the ending of Roman Polanski's "The Tenant," or Phillip Kaufman's "Invasion of the Body Snatchers" -- or, naturally, "Home Alone"), the painting expresses.... well, you can see how it speaks to the era in which we live. Reuters reports:

OSLO (Reuters) - "The Scream" and another stolen masterpiece by Norwegian artist Edvard Munch were recovered by police on Thursday, two years and nine days after gunmen seized the paintings from an Oslo museum.

"'The Scream' and 'Madonna' are now in police possession," police chief Iver Stensrud told a news conference. "The damage is much less than we could have feared."

He said the pictures were recovered on Thursday afternoon in "a successful police operation" but dodged questions about how it was done. He said no ransom had been paid "as of today."

"The Scream," Munch's most famous work, is an icon of existential angst showing a terrified figure against a blood-red sky. "Madonna" shows a bare-breasted woman with long black hair.

Two masked gunmen walked into the Munch Museum in Oslo in broad daylight in August 2004 and yanked the two works from the walls in front of dozens of terrified tourists. They escaped in a car driven by another man.

The paintings are both from 1893. Three men were convicted in May of taking part in the theft and were sentenced to up to eight years in jail.

Two of them were ordered to pay $122 million in damages. Three other men were acquitted.

Police said no new arrests or charges had been made in connection with the recovery of the paintings.

Experts at the Munch Museum had examined the pictures and judged them authentic, a museum official said. A scientific examination will also be carried out to verify the works.

A spokeswoman for a City of Oslo foundation that owns the Munch Museum collection said she hoped the paintings could be put back on display soon.

Munch painted two famous versions of "The Scream," including the one recovered on Thursday.

The other was stolen in 1994 from Oslo's National Gallery by thieves who broke a window and climbed in with a ladder. It was recovered after several months by police posing as buyers.

After the August 22, 2004, robbery, the Munch Museum underwent a $6.4 million security upgrade.

Stensrud declined to answer questions about media reports last week that a jailed bank robber, David Toska, had promised information about the paintings if he won a reduced sentence.

Toska was sentenced to 19 years in prison for his part in a 2004 bank robbery in which a policeman was shot dead. Last week an appeals court suspended a three-year sentence he had received for another 2001 robbery and said it could reconsider the case, which caused Norwegian media to speculate he had cut a deal.

"Out of consideration of police working methods, it will be hard to give details about how the operation was carried out," the police said in a statement.

In the foreground of "The Scream," on a bridge with railings, is a human figure, hands to its head, eyes staring, mouth agape. Further back are two men in top hats and a landscape of fjord and hills against a red sky.

The painting is regarded as an evocative depiction of angst in a world of man-made horrors such as genocide. It and "Madonna" were bequeathed with a large body of Munch's work to the City of Oslo in the painter's will.