The promotional poetry of the MPAA 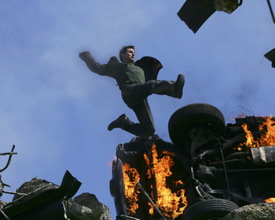 A disturbing image of frenetic violence and menace -- and some sensuality, if you're into the whole Cronenbergian "Crash" thing.

You may not have noticed one of the most exciting blurbs appearing in ads for "Mission: Impossible III." It reads: "Intense sequences of frenetic violence & menace, disturbing images & some sensuality!" (OK, I added the exclamation point.)

The reason you may not have seen this is because it appears in a little box in the lower left-hand corner of some print ads, and at the end of some TV ads and trailers, in a little box next to the code "PG-13." Yes, "frenetic violence & menace," "disturbing images" and "sensuality" -- though they sound like something a critic or a marketing department might say -- are words (superlatives?) employed by the Motion Picture Association of America (or, if you prefer, the Classification and Rating Administration, or CARA, a subdivision of the MPAA) to describe the reason for their PG-13 rating. Whew! Heady stuff, no?

I remember being particularly proud of the MPAA rating we received for "It's Pat: The Movie," which to my knowledge was the first and only motion picture ever given a PG-13 rating for "bizarre gender-related humor." (You can look up -- at filmratings.com.)

I've gotten hooked on the occasionally poetic film criticism of the MPAA and CARA. Guess which of the following blurbs applied to Paul Haggis's "Crash" (2005), and which to David Cronenberg's "Crash" (1996):

a) "accident gore, some graphic language and aberrant sexual content."

Answers: Haggis's R-rated movie is "b." Cronenberg's R-rated "Crash" is "a"; but the NC-17 version is "c." Note that only Haggis's movie is rated for violence. The R-rated Cronenberg "Crash" has "some accident gore," but that (like the Haggis R) is only one of three considerations, the others being language and sex. In the NC-17 rating of "Crash," however, the language and gore aren't even worth mentioning because they are apparently so strongly overshadowed by the "numerous explicit sex scenes."

Sometimes you can tell that the MPAA/CARA raters just aren't into it. Other times, they dig into their censorious thesauri with gusto. Compare and contrast these R ratings:

"United 93" (R): "language, and some intense sequences of terror and violence."

But back to "Mission: Impossible": CARA's approach to the previous films in this series read like early drafts until they finally got it right on the third attempt:

That's right, we've gone from merely "intense" to "frenetic" and "menace" and "disturbing." You can't buy a review like that. Pure poetry...