'Chaos' is no 'Devil's Rejects'

"Chaos" is ugly, nihilistic, and cruel -- a film I regret having seen. I urge you to avoid it. Don't make the mistake of thinking it's "only" a horror film, or a slasher film. It is an exercise in heartless cruelty and it ends with careless brutality. The movie denies not only the value of life, but the possibility of hope.

The movie premiered in late July at Flashback Weekend, a Chicago convention devoted to horror and exploitation films. As I write, it remains unreviewed in Variety, unlisted on RottenTomatoes.com. As an unabashed retread of "Last House on the Left" (itself by Bergman's "The Virgin Spring"), it may develop a certain notoriety, but you don't judge a book by its cover or a remake by its inspiration.

A few Web writers have seen it, and try to deal with their feelings: "What is inflicted upon these women is degrading, humiliating, and terrible on every level" -- Capone, Ain't It Cool News; "Disgusting, shocking and laced with humiliation, nudity, profanity and limit-shoving tastelessness" -- John Gray, Pitofhorror.com; "What's the point of this s--t anyway?" -- Ed Gonzalez, slantmagazine.com.

But Capone finds the film "highly effective" if "painful and difficult to watch." And Gray looks on the bright side: DeFalco "manages to shock and disturb as well as give fans a glimpse of hope that some people are still trying to make good, sleazy, exploitation films." Gonzalez finds no redeeming features, adding "DeFalco directs the whole thing with all the finesse of someone who has been hit on the head one too many times (is this a good time to say he was a wrestler?)."

I quote these reviews because I'm fascinated by their strategies for dealing with a film that transcends all barriers of decency. There are two scenes so gruesome I cannot describe them in a newspaper, no matter what words I use. Having seen it, I cannot ignore it, nor can I deny that it affected me strongly: I recoiled during some of the most cruel moments, and when the film was over I was filled with sadness and disquiet.

The plot: Angelica and Emily (Chantal Degroat and Maya Barovich) are UCLA students, visiting the country cabin of Emily's parents, an interracial couple. They hear about a rave in the woods, drive off to party, meet a lout named Swan (Sage Stallone) and ask him where they can find some Ecstasy. He leads them to a cabin occupied by Chaos (Kevin Gage), already wanted for serial killing; Frankie (Stephen Wozniak) and Sadie (Kelly K. C. Quann). They're a Manson family in microcosm. By the end of the film, they will have raped and murdered the girls, not always in that order, nor does the bloodshed stop there. The violence is sadistic, graphic, savage and heartless. Much of the action involves the girls weeping and pleading for their lives. When the film pauses for dialogue, it is often racist.

So that's it. DeFalco directs with a crude, efficient gusto, as a man with an ax makes short work of firewood. Kevin Gage makes Chaos repulsive and cruel, Quann is effective as a pathetic, dim-witted sex slave, and the young victims are played with relentless sincerity; to the degree that we are repelled by the killers and feel pity for the victims, the movie "works." It works, all right, but I'm with Ed Gonzalez: Why do we need this s--t? 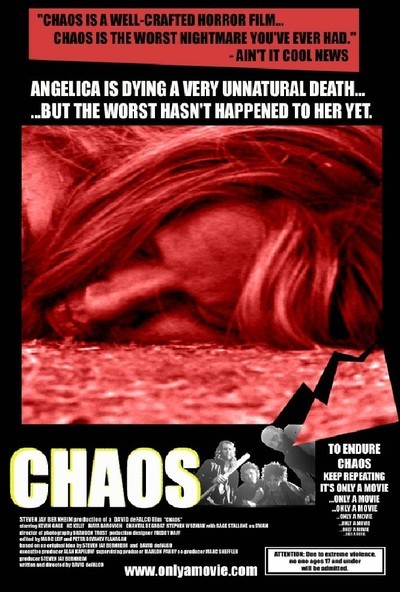