The musician: John Darnielle on criticism 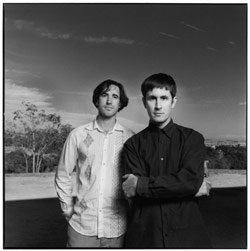 Saw The Mountain Goats (John Darnielle and Peter Hughes) this weekend and I can't get the show out of my head. (Not only that, I don't want to.) Darnielle writes and performs songs that earn the adjective "cinematic," composed of images, characters and stories that play around in your head over and over. (Besides, I really think movies are more like music than any other medium or art form. Someday I want to write about Kubrick's "Eyes Wide Shut" from that standpoint. Forget narrative...) I was a latecomer to The Mountain Goats, but a friend played me "Tallahassee" (2002) and I was hooked. It's a movie about a hell-bent-on-destruction couple with marital problems and alcohol problems who move to Florida to die and rot (not necessarily in that order). Really, a movie. Watch this (from "Tallahassee"):

Window facing an ill-kept front yard Plums on the tree heavy with nectar Prayers to summon the destroying angel Moon stuttering in the sky like film stuck in a projector And you...

Or this (from "The House That Dripped Blood"):

It's spare, it's acoustic, but it isn't Easy Listening. (And it's poetry, but you really do need to hear the music in order to see the whole picture.) Anyway, the reason I bring up John Darnielle is because of something he had to say about, well, I guess you'd call it "art appreciation" and criticism, in an interview with The Believer. He was talking about an anti-Christian death metal band he found fascinating:

Well, I think that part of the appeal of it for me is that the first time you hear it, you go, “Whoa, I can see how this is interesting, but I can’t imagine being into it and receiving it or responding to it the way you do to the type of music that naturally moves you." And whether in the case with film or books or anything, that really intrigues me, and I really want to see what sort of theoretical underpinning you have to get to respond to it. Sort of like if you’re watching some genre of film that is not your type and learning the vocabulary in such a way that you can say, “This is a good example of a light comedy."

I like that a lot. As I keep saying, context is crucial. (Did I mention that Darniell also writes music criticism?)

Darnielle (some of whose songs, by the way, are very funny) has a wonderful analysis of irony:

The campy-listening thing, I think, is false. I don’t think that there is any such thing, actually. This happens with age, that at some point you might have told yourself and others that you listened to the Backstreet Boys because it was funny. But in fact, you were enjoying it; it’s just a different kind of enjoyment for you. But I don’t think that ironic-distance appreciation is actually a different or lesser appreciation. I think most of that irony is an attempt to say, “These aren’t exactly my kind of people, and I don’t picture myself sounding like that, but I still like it." I don’t believe in ironic appreciation. I think if you like something, the core of it is you like it.

Yes! So much for "guilty pleasures." If you like it, you like it. Own up to it. Just don't go around pretending it's some kind of ironic stance on your part. (I'm proud to say it: I love Herb Alpert and the Tijuana Brass! I know it sounds silly, but they led me into mainstream jazz at a young age... and the idea of "world music" before there was such a thing.)