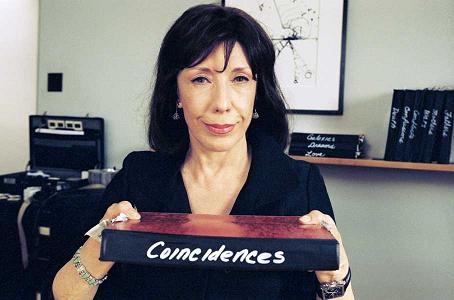 Why is this stuff coming out now? Coincidence?

Sergio Leone and the Infield Fly Rule has the best coverage anywhere of the whole "I (Heart) Huckabees" on-set "maelstrom" (as proprietor Dennis Cozzalio calls it), including the now-infamous YouTube clips of the battles between Lily Tomlin and writer-director David O. Russell. There's also an excerpt from the Playboy interview with George Clooney discussing various meltdowns during the shooting of "Three Kings," and an appearance by Tomlin and co-star Dustin Hoffman on "Good Morning America," promoting "Huckabees." Plus, there's a fantastic string of comments that you won't find anywhere else.

Can working with a volcanic director actually be good for the creative process? If not, why (besides the money) would actors and crew members tolerate such behavior? Is this kind of threatening, off-the-rails, abusive behavior somehow actionable? And if not, why would anyone want to work with Russell again? "Huckabees" may be brilliant, it may be a mess, but one could hardly call it complacent—it’s in there scrapping for slivers of enlightenment and understanding right along with the people who made it and the audiences who choose to see it and run with it, and perhaps some of this striving, searching, reckless clashing of tones and spirits that are vital to the movie can be directly traced to this kind of passion, however misplaced it might seem. These are the questions. I have no answers.

Over at The Hot Blog, David Poland cites a few excerpts from Sharon Waxman's 2004 New York Times set-visit piece on the turmoil of "Huckabees" ("The Nudist Buddhist Borderline-Abusive Love-In"). Here's another piece from that story that sets the scene for one of the clips:

The actors do take after take in the crowded car, with Mr. Russell, as is his habit, constantly throwing new lines at them from a few feet away. The dialogue is poignant and bizarre at the same time, and the scene culminates with Mr. Hoffman and Ms. Tomlin weeping simultaneously and loudly.

While the cameras roll, Mr. Russell berates the actors: ''Where's the [expletive] reaction?'' he swears at Mr. Hoffman.

The actors look tired. As he has throughout the shoot, Mr. Russell is touching them -- a lot, and sometimes in private places. At one point, Mr. Wahlberg grabs the director's megaphone, shouting: ''This man just grabbed my genitals! It is my first man-on-man contact!'' At other times, the director whispers into the actresses' ears -- lewdly, they later say -- before a take.

So far, the actors have been remarkably tolerant of Mr. Russell's mischief. As Ms. Huppert later observed in a phone interview, the actors knew Mr. Russell was intentionally trying to destabilize them for the sake of their performances. ''He is fascinating, completely brilliant, intelligent and very annoying sometimes, too,'' she said. They also know he has created superb films from chaotic-seeming sets before. Besides, he's the director and the writer; now that they've cast their lot with him, they really don't have a choice.

My 2¢: It's inexcusable, counterproductive and unprofessional to berate anybody on a set in front of the rest of the cast and crew. If you have to scream or vent over "creative differences" (or personality flaws), then call the person aside and hash it out in your office or your trailer. Who does Russell think he is? Ari Gold?

Tomlin had worked with Russell before (on "Flirting With Disaster"), so perhaps she knew what she was in for. She pushed back pretty hard, but she wasn't cowed by Russell (as Dustin Hoffman seems to have been, at least in these clips). If you create a set in which tantrums are allowed or encouraged, then you're going to get incendiary blowback. Some actors feel these kinds of shenanigans by an "artistic genius" are just part of the process. Others would say it's absolutely unacceptable -- the kind of thing that wouldn't be allowed (or nobody would stand for) in any other workplace. (I knew a newspaper editor who screamed a lot and once threw a stapler at a writer, but management did not view this behavior as permissible.)

I recently re-watched Peter Bogdanovich's "Directed By John Ford," wherein John Wayne, James Stewart and Henry Fonda all recount stories of how Ford embarrassed and humiliated them on the set -- but (and this is key, I think) Ford didn't lose his temper. He may have been angry, or sullen, or grumpy, or he may have just been trying to knock them down a notch and re-assert his authority (as if anyone would ever question it!), but he didn't lose control of himself. He was firm -- maybe even cruel -- but not abusive.

OK, not everyone has the temperament of John Ford. Many directors are stern or harsh -- even "borderline abusive" -- when it comes to getting what they want from their cast or crew. Think of Robert Altman, Henry Hathaway, David Fincher (watch out for those directors named David -- they want lots of takes!), Sam Peckinpah, Stanley Kubrick... or David O. Russell. None of them has a reputation as a pushover.

But I have the same kinds of questions that Dennis has. It's one thing for artists to be assholes in their personal lives, but is it ethically acceptable for them to subject their collaborators, co-workers or subordinates to their self-indulgent, abusive behavior? I think not. Except, maybe, studio executives, who are too often (passive-aggressive) adversaries rather than collaborators. They're fair game. You can yell at them all you want, especially if they yell at you first.