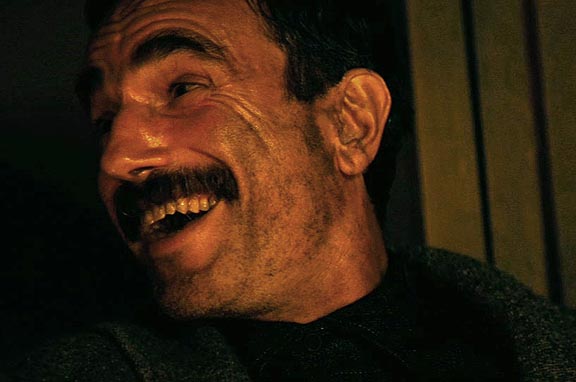 (Consider this a parallel addition to thread of reader comments in the post below: Big Acting, Best and Worst: Over the top, Ma!)

Kathleen Murphy and I try to drill down to the bottom of Daniel Day-Lewis's portrayal of Daniel Plainview in Paul Thomas Anderson's "There will Be Blood" in a "Point/Counterpoint" exchange at MSN Movies. For me, it was almost like a therapy session, forcing me to confront my deep ambivalence about Day-Lewis as an actor and my admiration-disappointment response to Anderson's film. (Overall, I don't feel strongly enough in either direction to characterize it as a "love-hate" relationship. I have reservations, but there's no question it's a "must-see.")

Kathleen's reading of the film is just magnificent. I don't share it, but I that doesn't prevent me from loving and appreciating it, and she makes her case most eloquently. Here's a sample of our back-and-forth:

Kathleen Murphy: Like the dissonant sounds and music that thrum through so many scenes in the movie, Plainview operates against the grain of mundane, familiar humanity -- and Day-Lewis plays him like fingernails on a chalkboard. A quintessentially American confidence artist, Plainview's a dynamo that runs hotter and faster than any flesh-and-blood metabolism. Day-Lewis isn't acting a human being at all, but a force, a power, ultimately a blight that haunts America still.

In "TWBB," Day-Lewis starts out as a driller worm, a black faceless thing in a dark hole. His very first communication is "No!", barely a discernible word buried in the awful, inhuman groans emitted after his bone-shattering fall into the mine. In fact, Plainview is pure negation, anti-life -- despite his sales spiel about the symbiosis of capitalism and civilization.

The faceless, subterranean thing rises, triumphantly brandishing a hand painted black with oil, an echo of those red hands left as signatures by primitive man on cave walls. Even as his drilling machines become more sophisticated, Plainview learns to fast-talk, to bend the herd to his will. Day-Lewis grows this snake in the American Eden into a suave demon in human flesh, conning sheep, "seeing the worst in people and not needing to see past that to get what I want." He makes the earth itself bleed black blood, and cuts every umbilical cord to human feeling. [...]

In my reply, I suggest that the movie and Day-Lewis are shooting fish in a barrel:

Let me say I admire large parcels of Paul Thomas Anderson's film, and isolated moments in Day-Lewis' portrayal of Plainview, yet I don't think either taps very deeply into the well of mystery, resonance and American archetype. While Day-Lewis and Plainview get bigger and drunker and crazier as it goes along, the movie constricts thematically and narrows to a terminal point, pinning Plainview to its canvas like an insect specimen: Here is a moral tale of one greedy and misanthropic bastard, a moral gnat played with grand flapping flourishes by a big actor. Amidst the film's true believers, I feel a bit like Plainview after witnessing Eli Sunday's (Paul Dano) arthritic exorcism in the Church of the Third Revelation: "That was one goddamn helluva show." I don't share the revelation, either, yet I can't help but acknowledge the showmanship. [...]

one example from "TWBB" that illustrates how I think it and Day-Lewis go wrong. The movie's (black) heart is the speech Plainview gives to his presumed long-lost brother Henry, about how little use he has for people and how much he hates them. It's a breakthrough moment for Plainview, as he allows Henry into his confidence and his business: "I can't keep doing this on my own ... with these ... people." And then he laughs, dryly and too loud. It's too, too much: first the contemptuously pregnant pause, then the overemphasis on his disgust with the word "people," and finally that gilding-the-lily laugh. All Day-Lewis leaves out is the dastardly Snidely Whiplash twirl of his mustache.

Day-Lewis shoves me right out of the movie. The emotional void, the disgust, the bitterness -- they're all qualities Plainview also exhibits, but he's a better salesman. If Plainview is trying to bond with his brother over whiskey and misanthropy, or to test Henry to see if he shares Daniel's all-consuming envy and entitlement ("If it's in me, it's in you"), the oilman and the actor are overselling it egregiously. And that's the fatal miscalculation of this film and this performance: Day-Lewis isn't content to play this character; he stands apart from Plainview, judging him and telling us how we should feel about him, every step of the way. Plainview himself sucks the air out of any room he inhabits (even when he's outdoors), but I feel like Day-Lewis goes him one further, strutting and fretting to upstage his own character.