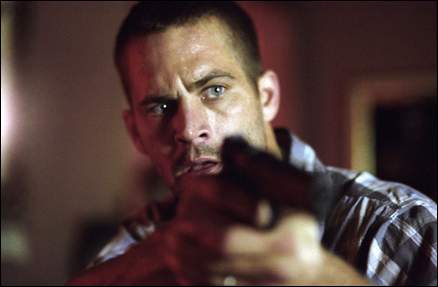 Wayne Kramer, the director of "The Cooler" and "Running Scared," took the negative reviews of his last picture pretty hard. They weren't all negative, though. Roger Ebert gave "Running Scared" three stars and wrote a dizzying description:

Speaking of movies that go over the top, "Running Scared" goes so far over the top, it circumnavigates the top and doubles back on itself; it's the Mobius Strip of over-the-topness. I am in awe. It throws in everything but the kitchen sink. Then it throws in the kitchen sink, too, and the combo washer-dryer in the laundry room, while the hero and his wife are having sex on top of it.

Advertisement
That kind of "pushing the envelope," as he's phrased it in interviews, appears to be pretty much what Kramer was going for.

But Kramer evidently felt there was some kind of critical curse on his film, which came out on DVD last week. In an interview with Scott Collura at Now Playing Magazine, Kramer says:

I feel it’s just one of those movies that people are gonna - That the marketing did not create an appealing image of what the film was, whether it be the trailers or posters, or whatever it was. People felt like this wasn’t something they needed to go see. Now, hopefully when they do see it, they’ll go, “Wow! We really misjudged this film," Or, “It’s a lot better than I was led to believe." We had some good reviews. I don’t mean to say every critic hated the film. We had like Roger Ebert, and Quentin Tarantino’s a big fan of the film and really comes out strongly for it; and Andrew Sarris and guys like Mick LaSalle. But if you check out a site like Rotten Tomatoes -- I kind of have mixed feelings about that site because every Internet jerk with a website gets to play film critic. And usually it attracts the more elitist, snobbish sites that I just despise like Slant.com [actually, it's slantmagazine.com]. Have you ever seen those guys? I mean they hate movies.

WK: And you can print that, too. Please.

Actually, I wish more filmmakers would talk about the critics they respect, and the ones they don't -- and why. (Kramer is a little skimpy on reasons here.) But he's fooling himself if he thinks bad reviews killed the opening weekend of a movie like "Running Scared." Elsewhere in the interview he talks about the lack of marketing support and perception problems with Paul Walker's image among the target audience (he's maybe too pretty, not rough enough for the teenage boys). Walker's never had the marquee value to open a film -- and "Running Scared" was his third picture in six months. He had an aquatic thriller in September ("Into the Blue"), and an Antarctic adventure ("Eight Below") that opened the week before "Running Scared" in March. So, all things considered, the movie didn't really stand out in the marketplace, and it wasn't because of anything the critics said.

WK: Even take the top critics; put them on a set and ask them where they would put the camera. I don’t think these guys would fare very well, but that’s not their role. I mean they have taken the role, and they’re to be film critics. But a lot of times as critics, they’re not really reviewing a film for an audience. They’re reviewing it in a way with their own prejudices. I mean when you’re reviewing an action film or a horror film, you really should be trying to communicate to that audience whether they would like to see it or not. Because obviously a critic is gonna have a lot of personal biases against material, and a lot of these critics are guys that are like 50-years-old and plus. They’re not the demographic of the film. I mean I cannot believe - You know I didn’t want this to sound like sour grapes or anything, but we had in LA - are you in LA?

WK: Right. We had a woman from the LA Times who just came out against this film. And in the opening lines of her review she said, “I’m pretty sure this is gonna be the worst movie of 2006." And then preceded to just like tear apart everything. Never mentioning any of the craft that went into the film; any of the performance; just because it offended her, whatever her moral sensibility was. And that’s going in one of the biggest newspapers in the country and that’s on record and that’s what people read. And you feel like this woman did no service to audience members out there. It’s actually, when you think about critics or a single person who writes under the banner of a big national newspaper, its one person’s point of view, and yet, it gets printed or reprinted as the voice of an entire newspaper. Where I’m pretty sure there were some other critics or staff who would probably have liked the film.

NP: Right. My home town, out in suburban New York, people always will just say, “Oh, so-and-so film got two stars," or whatever. And they’ll just be referring to like what they read in the local paper; one person’s review, one person’s opinion.

WK: I can’t tell you how many negatively reviewed movies that I’ve seen that I go, “What were the critics talking about? I thought this thing was fantastic?" Whether it be something recently like "Man on Fire." Remember a lot of critics came out against that film? And I thought it was really good. Or, I remember when "Scarface" came out; Brian De Palma got a Golden Raspberry nomination. All the critics hated that movie, but if you go on Rotten Tomatoes, it’s all the revisionist reviews. Also like Heat when it first came out, the reviews were very mixed and different. Now that’s considered a classic. I remember another movie, "State of Grace", which I think is a terrific movie; nobody even noticed that film when it came out. A movie like "Madea"'s [Tyler Perry's "Madea's Family Reunion," which wasn't previewed for critics] can get terrible reviews when it’s reviewed the Monday morning afterwards, but it’s got a $30 million box office to crow about. Or "The Pink Panther" or whatever. But, we got like a lot of negative reviews; nobody turned up to see the movie, and you sit in the aftermath of that and go, “God, this just doesn’t feel right." Not in terms of what you’re owed by anybody, but just like, “Where’s the audience for this movie ‘cause there’s got to be an audience for this movie?"

Advertisement
I felt like I had to quote fairly extensively in order to let Kramer make his point. But I think his misconception is in that last sentence. No, there doesn't have to be an audience for any movie. What would make somebody think that? It's hard to make a movie, but sometimes the result is not necessarily something people want to rush out and see. (I don't know about "Running Scared"; I haven't seen it yet, but Roger's review made me want to.)

As for the "pack mentality" among critics -- that can only develop if there are multiple critics' screenings over a period of time. In most cases, a commercial thriller like "Running Scared" would be screened only once -- at an "all media" screening, with an invited audience (targeted radio station giveaway passes). It might screen up to a week in advance of the opening, and critics go off and write their reviews. In most cases, they sure don't stand around and talk about it first. I don't know a decent critic who would try to sway other critics one way or another about a film. That kind of thing shows a lack of professional integrity. (I can only speak for critical etiquette in Los Angeles and Seattle -- I don't know how they behave in New York, where I'm told there is a more "suffocating uniformity" in critical opinion, as Manohla Dargis once described it.) And, besides, why tip your hand and give away your take on a movie before you've fully formulated it, written it and published it? I don't want anybody to know how I felt about a movie until my review is published -- especially publicists! In LA, I specifically asked them not to pounce on me the moment after the screening, while I was still absorbing the movie. In fact, a lot of times I don't know precisely how I feel about a certain movie (and why) until I start writing about it and feel my way back into it, do some exploring of the experience. So, in response to Kramer's theory: There's really not much of a chance for any kind of consensus to form on a given big-release picture, when everybody's reviews are embargoed and printed on the same (opening) day.

Kramer is right that the critical reputations of movies often evolve over time. We have a feature on RogerEbert.com called "Critical Debates," and we try to show the range of critical opinion about certain movies, especially "controversial" ones. It's interesting to see how movies we now think of as universally approved "classics" were not originally regarded as such by all (or even most) critics. That's the way art is. (I'll put together a list of some of the most interesting Critical Debates for another post.)