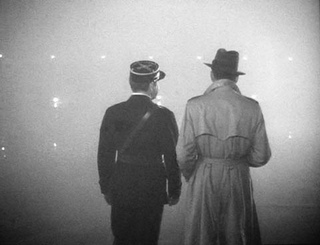 Everybody hates it when they don't explain everything that happened by the time the movie is over. What we need at the end is not open-endedness but clarity, loose-end tying-up, closure. We need more movies like "Psycho" (1960) (unfortunately Simon Oakland has passed, but Larry King is still with us) and "Mulholland Drive" -- movies that take a little time to explain exactly what happened so we're not left feeling stupid all the way home. You know what they say: The difference between a comedy and a tragedy is where you end the story. Well, the same goes for the ending: The difference between a good ending and a bad ending is how good the ending is. Here are eleven of the most outrageously unsatisfactory ambiguous endings in movie history:

"Gone With the Wind" (1939) Scarlett O'Hara says, "I'll go home. And I'll think of some way to get him back. After all... tomorrow is another day." That's not the ending of a movie -- that's the beginning of act three! Put up or shut up, Scarlett. Clark Gable has just said the word "Damn" at you and that's it? If tomorrow is such another day, then bring it on!

"Casablanca" (1942) What do you mean Ingrid Bergman goes off with Paul Henreid and all Bogart's left with is the barest hint of a homosexual future with Claude Rains? At the end he puts her on a damn plane (something about how she doesn't amount to a hill of beans) and he and Rains walk off into the fog together as Bogart says, "Louis, I think this is the beginning of a beautiful friendship." Whoa! What the hell happened then? What if "Brokeback Mountain" ended right after Heath Ledger threw up? What kind of ending would that be? And how does Peter Lorre figure into it?

"Do the Right Thing" (1989) What was the right thing? Who did it? What about Tawana Brawley? Shut up and stop playing mind games!

"Chinatown" (1974) If Mrs. Mulwray isn't going to pay Jake Gittes for all the work he did, who's he going to get the money from? Her dad? Does Noah Cross even know how much she owes Jake? You don't just walk away from a case like this. It's unprofessional.

"North By Northwest" (1959) Talk about leaving us hanging: How did they get off of Abraham Lincoln's nose, or whoever's face it was? I don't buy it. And when did Cary Grant and Eva Marie Saint get married -- sometime in that dissolve? That was quick. Then -- whoosh! -- the train just goes into the tunnel and that's all she wrote? When does it come out of the tunnel? Ever?

"Zodiac" (2007) Well, Jake Gyllenhaal seemed pretty sure that was the guy, so why didn't they just settle it and arrest him and execute him? He was a Zodiac killer, wasn't he? Probably!

"The Godfather" (1972) Who thinks it's OK for one major character to tell another one a bald-faced lie and then just shut the door and make that the end of the movie? Nobody. Because it's not. No wonder they had to make two more sequels until Michael Corleone finally just keeled over and died of old age. That's an ending. It's not like we never thought Kay would figure out he was bullshitting her. How dumb do they think we are?

"Fargo" (1996) It didn't bother me so much the first time, but now that the USPS has issued "Forever Stamps," who's going to need Norm's 3-cent mallards anymore? What a big, fat bummer. There's more to life than a little money, you know. Especially when it's only 3 cents.

"The Wizard of Oz" (1939) Kansas to Oz I can understand, because it's Over the Rainbow, but how does a tornado take anybody from sepia to Technicolor? And why would you want to go back? Doesn't it seem awfully convenient that the farm hands looked like Dorothy's friends in Oz? Why doesn't somebody just say whether it was a dream or not? And when is Miss Gulch coming back to take Toto to be put down?