The death of film criticism has been greatly exaggerated, Part I 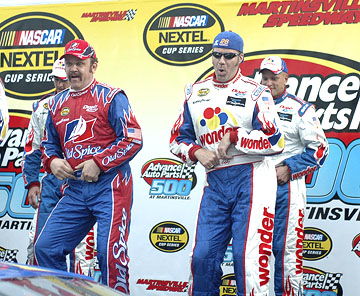 A Los Angeles Times/Bloomberg poll found that only 3 percent of 18- 24-year-olds would have picked this still as their first choice to accompany this article, since it has nothing whatsoever to do with the contents of the article itself. The poll has a margin of error of plus or minus 3 percent.

"All in all, it's been a rotten tomato of a summer for America's embattled film critics.... It's no secret that critics have lost influence in recent years. A recent Los Angeles Times/Bloomberg poll found that among 18- to 24-year-olds, only 3% said reviews were the most important factor in their movie-going decision making. Older audiences still look to critics for guidance, especially with the smaller, more ambitious studio specialty films. But during the summer months, with studios wooing audiences with $40 million worth of marketing propaganda, critics appear especially overwhelmed, if not irrelevant."

-- The Los Angeles Times, asserting that critics are less powerful now than they never were. (8/15/06)

God, I love that paragraph. Go ahead -- read it again. One of my favorite propaganda techniques -- used in politics, journalism, criticism, you name it -- is to present evidence (or, better yet, opinion polls cited as if they constituted evidence) refuting something that was never true -- or even widely thought to be true -- in the first place. It's a form of genius, really -- like the opinion polls asking Americans if they believed Saddam Hussein was behind 9/11, presented as though it could be made true if a majority felt it was. (There's another term for this technique: Fox News.)

This propaganda trick is related to the Straw Man argument, where you attack a position somebody doesn't hold instead of the one they do, but you pretend they're saying something they don't believe instead of what they actually said. All it takes is a bad listener. In the case of this article in the LA Times last week, it's made especially compelling by the knowledge that Times management has wasted colossal amounts of money on a poll of youngpeopleoftoday, forcing good reporters like Patrick Goldstein to have to invent something to make it appear the poll's findings meant... anything.

Read that hilariously insignificant statistic from the Times/Bloomberg poll one more time (and take an extra moment to savor the deliciously insinuating phrase, "It's no secret..."): Only 3 percent of 18- to 24-year-olds cited film critics as the most important factor in deciding whether to see a movie. Conclusion: It's no secret film critics are losing influence!!! The mind boggles. What percentage of persons in this six-year age span cited film critics as, say, the third-most important influence? Fifth-most? And what did this same age group say five years ago, 10 years ago, or 27 years ago? The "3 percent" figure is so narrowly defined that it's not just meaningless, but exquisitely, absurdly. ludicrously so. Somewhere, Joseph Heller is laughing out loud. And think about this for just one second: How many 18- to 24-year-olds do you know who depend primarily upon adult authority figures (like critics), above all other influences, to make their media choices, whether it's movies, music, video games, TV, web sites, whatever? Three percent seems a bit inflated to me.

(BTW, what are the ages of the "older audiences" who "still look to film critics for guidance" -- and what percentage of them rank that guidance as the most important factor in making moviegoing decisions about those "smaller, more ambitious studio specialty films"? Man, oh man -- those pollsters ask specific questions! "What is your most important source of guidance for smaller, more ambitious studio specialty films?" But did this Times/Bloomberg poll yield only one quotable statistic? If not, why weren't others cited to put this one in perspective?)

This is the kind of story that is based on "overturning" assumptions that never were. News Flash: Bush administration officials may have underestimated when they said the invasion and occupation of Iraq would cost no more than $1 billion and was unlikely to last more than a few weeks -- or as Donald Rumsfeld said, "I doubt six months." The word, "Duh" was invented for these occasions. If you honestly did not realize how preposterously false the original premises were, then you might get fooled again into thinking the second non-story qualifies as "news." (Follow up story: According to the president, when it comes to Iraq, "failure is not an option" -- even though that is the option deliberately and consistently favored by his administration above all others 9 times out of 10.)

In about a year, expect another News Flash: Poll Reveals Young People in Teens and Twenties Notoriously Unreliable Poll Subjects.

The non-stories in the trades, the entertainment press and the blogosphere about "the waning influence of critics" have the unmistakable whiff of what those in the news business call (with undisguised contempt) "trend pieces." These are usually flabby and unproven, predetermined concepts for stories suggested by editors who don't get out much. They're lazy pieces of pre-fab marketing (not journalism, not criticism) based on a simple formula: Take a minimum of three events or observations -- whether those things are, in fact, related or not -- and package them (rhetorically, at least) to support the single thesis you had before you started gathering data for your story. Voila! You've got a trend piece. Every reporter knows the rule: "Three's a trend."

You'd never know it from reading these 2006 stories that the major studios have always released expensive products that they have declined to pre-screen for the press. Now, we're told, the studios are screening fewer movies for critics. Fewer than when? The 1970s? The 1990s? 2003 - 2005, inclusive? I can't even recall how many such un-screened films I was relieved to be able to avoid when I was the LA-based critic for the Orange County Register in the late '80s and early '90s. But I sure remember the ones I was forced to catch on deadline at a Friday matinee. I hated Madonna all the more (wouldn't have thought it possible) because I had to see the disastrous "Who's That Girl?" at the first public showing one morning so I could write about it that afternoon; and I almost quit my job in 1992 rather than have to buy a ticket to review the excruciating "Christopher Columbus: The Discovery," with Marlon Brando, Tom Selleck and George Corraface, on what should have been my day off.

People who have no understanding of the role of movie critics in "the industry" tend to believe that studios are afraid of bad reviews because they might hurt their big pictures. That's flattering to critics, but it has never, ever been the case. ("Da Vinci Code," anybody?) Reviews rarely keep people away from mega-marketed studio product. The studios do a great job of that all by themselves, without any help from critics.

Take the reviews out of the equation and "Howard the Duck," "Hudson Hawk," "Ishtar," "Cutthroat Island" -- you name it -- would have gotten exactly the same public reception they did. The idea that a review could have changed people's minds about how they felt about these pictures is absurd. Most potential ticketbuyers sensed something about those movies long before opening weekend, and long before anyone outside the studios had seen them -- just as they had a sixth sense about "The Sixth Sense" from the day it opened. Once these movies open, they sink or swim based on word of mouth. The reviews, positive or negative, are forgotten pretty quickly.

As a former "art house" exhibitor in Seattle, I can testify to the beneficial influence of good reviews for films that require what they call "specialty" marketing -- indie comedies and dramas, foreign films, documentaries, revivals and restorations of old films (whether obscure gems or renowned classics), and so on. These are known as "review-driven" movies, and good reviews can definitely help create momentum for them.

Local newspaper reviews used to be critical to the commercial fate of these films in individual markets, but they're less important now that reviews from all over the company are available on the Internet. Now, you can just as easily read Roger Ebert or David Edelstein or Manohla Dargis or Jonathan Rosenbaum as the critic for your local daily or weekly. And if you want a quick overview of the critical reaction, rottentomatoes.com and metacritic.com are just a click away.

But there are moviegoers and then there are moviegoers who read reviews. The latter (get out the Venn diagram here, please) is only a small subset of the former. I also know from reading the mail from readers sent to RogerEbert.com that a lot of people consider the reviews themselves a form of entertainment, even when they have no intention of seeing the movie being reviewed.

So, if you're reading this (and, of course, you are or you wouldn't know I'm talking about you), you fall into a couple of sub-categories: people who like to read film criticism; and people who like to read film criticism, and discuss movies, on the Internet. (Place even tinier Venn diagram here.) Movies (particularly horror movies) are big-traffic categories on the web -- but (as I think we saw with the opening of "Snakes on a Plane"), they draw a passionate and potentially profitable niche audience with plenty of disposable income, but they're not necessarily reflective of the "mainstream" movie audience (i.e., the infrequent, movie-of-the-month crowd required to subsidize production budgets upwards of $70 or $100 million).

If you're a fan of film criticism -- that is, you think film is something worth writing, and reading about, beyond celebrity gossip and box office speculation -- then you are in a minority of people who go to movies in the theaters or watch them on TV or DVD. You may read your favorite critics in newspapers, magazines or online, but chances are, you also read -- or write -- some interesting, in-depth criticism that's available only on the web or in film journals. In other words, it's the stuff most readers metropolitan daily newspapers and corporate magazines like Entertainment Weekly probably don't even know exists.

To Be Continued: "Burying the Lede: Why Most People Wouldn't Even Know Movie Criticism If It Bit Them On the Asp."