The Creature from the Black Lagoon (or mud puddle) 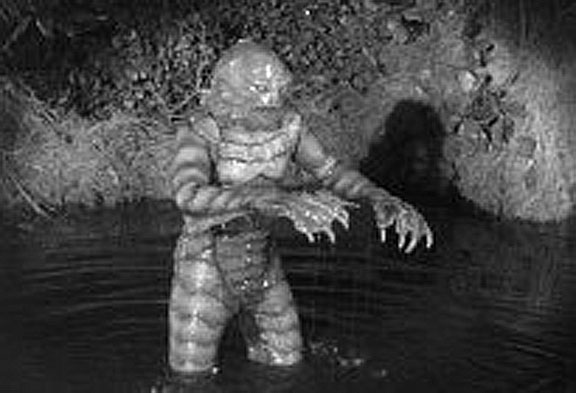 "Nobody wants to jump in the mud puddle with her." (Enlarge to see the Creature's mysterious adam's apple.)

Elizabeth Edwards says this in a Salon interview:

Ignoring the fact that she exists doesn't make her go away. If it did, you wouldn't hear me utter her name. So I think maybe the better thing to do is simply confront people like her. Are you going to stop them? Under no circumstances will you stop them. But maybe you empower other people to stand up, and maybe that has an effect. When I travel, so many older people thank me for what I did. Because the vile kind of way [she] thinks and talks, that was not ever part of the public discourse until recently. [...]

And later on, I talked to somebody, not an advisor -- I really don't have anybody advising me -- and not someone in the campaign. She'd been in a previous campaign, and she said, "Oh, I wouldn't have done that. I think that you put yourself at risk, subject to criticism unnecessarily." I understand the advice -- if you were advising somebody you might say that -- but that exact attitude is what protects somebody like [her]. Nobody wants to jump in the mud puddle with her.

Gosh, I wonder what Edwards could be talking about...?
Advertisement