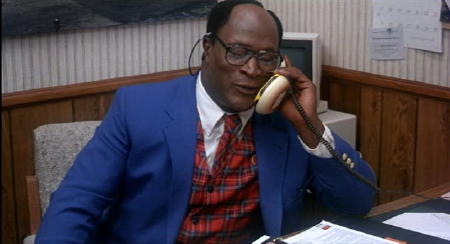 John Amos in "Coming to America."

His caption for this photo : "Yeah, Juno got that hamburger phone idea from me. Bitch ain't even give me credit, neither, Florida!" (Please note: The man's bun has no seeds.)

"Coming to America" may be the Blackest comedy ever made, and it’s little touches like McDowell’s [the low-rent, individually owned McDonald's knock-off] that elevate it past the mild amusement it seems to garner from White viewers into the upper echelon of hilarity it occupies for us. It crushes us under the weight of familiarity, to the point where a musical cue or a mere image is enough to inspire raucous laughter. There are so many in-jokes that the film is like an old Negro Spiritual: everybody can hear the music, but only we can understand the code in the words.