The Apatow schlub: Too ugly for the girl? 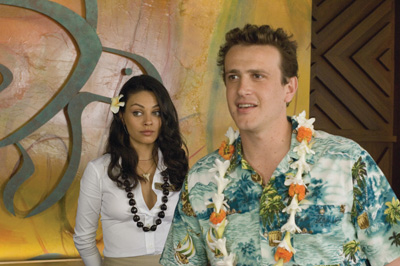 "Question is, what if this starts to manifest in realms outside Apatow World?" he frets. God forbid. Upon seeing Segel's upper torso at the beginning of "Forgetting Sarah Marshall" (this is before all the rest of him is bared to the world in a painfully funny break-up scene), Wells says:

I immediately went, "Oh, sh-t...I'm stuck with this dude for the whole film." Segel is an obviously bright guy with moderately appealing features, but he also has a chunky, blemished ass and little white man-boobs, and he could definitely use a little treadmill and stairmaster time and a serious cutback program regarding pasta, Frito scoop chips, Ben & Jerry's and Fatburger takeout. I don't relate to this sh-t at all, I was muttering to myself.

... I'm talking about the simple exercise of relating to a lead character during the first 10 or 15 minutes of a film and saying to myself, "Yeah, that's me to some extent...I'm sorta like that guy...I've been there," etc. If you can't do that, as I couldn't last night, the movie isn't going to work for you. Like, at all.

The success of Aptaow's comedies strongly suggests that most moviegoers don't have this problem. They're cool with schlumps getting the girl. Dramas are another matter, but in Apatow World, at least, moderately good-looking (or at least pleasant-featured) regular guys, neurotics or semi-smoothies who go to the gym every once in a while and maybe resemble the slightly fuller-bodied, not-quite-as-good-looking brothers of Matt Damon or Adrien Brody or Brad Pitt are totally out.

Taking their place are guys who look like real guys, which means almost never slender or buffed, and frequently chunky, overweight or obese. And usually with roundish faces with half-hearted beard growth, hair on their backs, man-boobs with tit hairs, blemishes, and always horribly dressed -- open-collared plaid dress shirts, low-thread-count T-shirts with lame-ass slogans or promotions on the chest, long shorts and sandals (or flip-flops), monkey feet, unpedicured toenails.

Can you tell the person who wrote this lives in West Hollywood? All I can say is, my sympathies to Matt Damon and Adrien Brody and Brad Pitt for being "totally out" where attractive women are concerned. At least they can console themselves with pedicures and higher thread-counts.

So, Kristen Bell and Mila Kunis are too beautiful for Jason Segel and Katherine Heigl is too beautiful for Seth Rogen and Catherine Keener is too beautiful for Steve Carell. Is that really a serious movie problem? (Judd Apatow is married to Leslie Mann. All he's doing is writing, producing, directing what he knows.) Why is Wells so upset? He sounds like a Dixieland racist spouting off about miscegenation in the 1950s. It's an outrage, a threat to the species!

"I only know that if I were a girl or gay and Jason Segel came up to me at a bar and tried to put the moves on, I would scrunch my face up and say, "Are you f--king kidding me?"

(Just be careful clicking on that picture of Cary Grant he features with his post. You may see a lot more Archie Leach than you ever wanted to.)