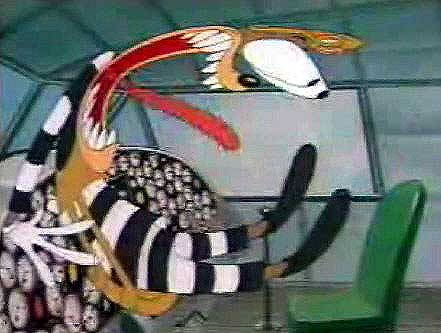 Dennis at Sergio Leone and the Infield Fly Rule has posted his favorite Tex Avery cartoon, "Rock-a-Bye Bear," in response to posts by Peet Gelderblom and That Little Round-Headed Boy, who remarked that this exchange has turned into a sort of spontaneous de-facto Tex Avery blog-a-thon. Well, include me in!

The naughty fairy tale "Red Hot Riding Hood" and "King-Size Canary" are treasured classics, but one of the funniest 'toons ever, for my money, is "Northwest Hounded Police," (1946) starring Droopy Dog as Sgt. McPoodle of the Mounties. Its surreal sensibility anticipates "Duck Amuck" (Chuck Jones, 1953) by way of "Cops" (1922). Only instead of the wanted man being pursued by a whole stampede of cops (they accumulate, like the avalanche of boulders and brides in "Seven Chances"), he's hounded by what an extraordinarily persistent Droopy. The nightmare logic is relentless -- and part of what makes it so funny is that it's also creepy and anxiety-inducing...

UPDATE: After watching "Rock-a-Bye Bear" on Dennis's site, something struck me (and it wasn't a mallet or a club or an anvil): It's built upon the same recurring gag as Abbas Kiarostami's "The Wind Will Carry Us." Yep, that fancy-schmancy Iranian artiste has been stealing from Tex Avery! One involves a dog repeatedly running out into the snow to make noise; the other involves a man repeatedly running out into the desert to get cell phone reception.