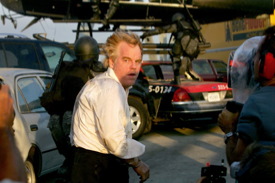 Philip Seymour Hoffman is the bad guy in "M:I:III."

"Sure to be one of the best films of the year." -- Jeffrey Lyons (on "The Prize Winner of Defiance, Ohio")

"Anthony Hopkins gives one of his finest, most endearing performances in what is sure to be one of the year's best films." -- Jeffrey Lyons (on "The World's Fastest Indian")

"Sure to be one of the most successful thrillers of the year!" -- Jeffrey Lyons (on "Mission: Impossible III")

Let us pause, in what is sure to be one of the most successful pauses of the year (after all of the year's pauses have been experienced and ranked accordingly, of course), to consider the devaluation of language. We could also consider the devolution of film criticism, but let's not limit ourselves. What can we deduce from the three quotations above?

First, we might be inclined to feel that Lyons is damning "Mission: Impossible III" with faint praise. He does not say that it, like the other two films, is sure to be one of the year's best; only one of the most "successful" films of the year in a particular genre (thrillers). And that is not something that can be determined now, but only at some unspecified future date (presumably after the very last thriller of 2006 has finished its theatrical runs and/or DVD sales and rental lifecycle). When critics are reduced to making financial or popular prognostications... well, it's sad. They do that in Variety, but it's a trade publication, so that's their angle. What do cinematic Nostradamuses (Nostradamii?) intend to convey by predicting that a given film will find "success," I wonder? And on what terms do they define such "success"?

Ah, but I didn't give you the full Lyons quote as it appears in the "M:I:III" ads. The next line is: "The best 'Mission: Impossible' yet!" So, while the film may not necessarily be one of the year's best when the year is over, it is destined to be one of the most successful thrillers of 2006 and it is judged the "best" in the "Mission: Impossible" series (so far). According, that is, to Mr. Jeffrey Lyons (who is identified in the ad as being affiliated with "NBC's Reel Talk," which airs on a local New York station, WNBC).

But let's look at that first sentence in the quotation again. What a finely crafted piece of work it is: "Sure to be one of the most successful thrillers of the year!" (The exclamation point appears in the ad, but sometimes they insert emphatic punctuation for promotional purposes.) Read it slowly, one word at a time. It says almost precisely nothing at all -- and could be said (with conviction!) even by someone who has not seen the movie. It makes a prediction (covering the bases with qualifiers so as to avoid taking the slightest risk) that, at some point in the future, 1) the movie will be considered a "thriller"; and 2) it will (again, at some future time) be deemed one of several among the "most successful" of the year's thrillers when its performance is compared to other thrillers that may or may not be released in the remaining eight months of 2006. Wow.

Indeed, this language, precision-tooled to make a vague impression, reminds me of some other brilliantly honed pieces of prose we've heard of late:

"I am The Decider. And I decide what is best. And what is best is for Don Rumsfeld to remain as the secretary of defense." (Translation: Rumsfeld is sure to be one of the best Secretaries of Defense of the year.)

"British intelligence has learned that Saddam Hussein recently sought significant quantities of uranium from Africa." (Translation: I've been told it's not true, but I want it to be true, and I can avoid responsibility for the statement, and make its truth or untruth irrelevant, by simply claiming a third party has "learned" it. As in: "My niece has learned that human babies are delivered by stork.")

Stephen Colbert's speech at the White House Correspondents Dinner displayed a similar attention to the illogical language of politics and marketing, turning out phrases with keen attention to their absurdity and their ability to sound like one thing while meaning something else -- or meaning nothing at all:

"I stand by this man because he stands for things. Not only for things, he stands on things. Things like aircraft carriers and rubble and recently flooded city squares. And that sends a strong message, that no matter what happens to America, she will always rebound -- with the most powerfully staged photo ops in the world." (Note the inspired metamorphosis of the word "stand.")

"Fox News gives you both sides of every story: the president's side, and the vice president's side." (Has the lie of "fair and balanced" -- the assumption that there are only two "sides" to every issue, and that they are both of equal weight -- ever been debunked so pithily?)

"Over the last five years you people were so good -- over tax cuts, WMD intelligence, the effect of global warming. We Americans didn't want to know, and you had the courtesy not to try to find out. Those were good times, as far as we knew." (Praising the press for not doing its job because ignorance is bliss. That last sentence grabs the metaphorical knife inserted in the previous sentences and gives it a marvelous twist.)

P.S. Back to Lyons: We are pleased to report that "The Prize Winner of Defiance, Ohio" and "The World's Fastest Indian" were, indeed, judged among the best films of the year 2005 by Mr. Jeffrey Lyons when it came time to make his year-end Ten Best List. Look for "M:I:III" on his annual year-end Most Successful Thrillers List.