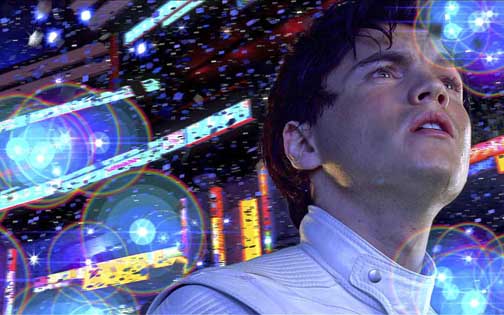 Keep your feet on the ground and keep reaching for the stars...

"One of the most genuinely confounding films to come along in years... This is not a film occurring in an alternate or imaginary reality; rather, it is a film of no reality, that is, a picture that changes the rules of its universe strictly according to its creators' whims. Hence, the film is likely to inspire even more heavy thinking on the part of cultural theorists than 'The Matrix' did."

"A lot of fluorescent, 7-Eleven-tinted images flash by, any of which could easily be removed or re-arranged without significantly disrupting the film's continuity, because it has none. If you can determine the spatial relationship between Speed's Mach 5 (or Mach 6) and any other race car for more than a few consecutive seconds, then good for you. As on the TV series, the pictures don't seem to move so much as repeat -- movement with no momentum."

"'Speed Racer' is not a feature film in any conventional sense... Whatever information that passes from your retinas to your brain during 'Speed Racer' is conveyed through optical design and not so much through more traditional devices such as dialogue, narrative, performance or characterization."

"Alas, this radicalization of film language, while certainly impressive to behold, yields heretofore un-dreamed of levels of narrative incoherence, but hey, not every experiment succeeds."

"One of the more blatantly anti-capitalist storylines to come down the cinematic pike since, I dunno, Bertolucci's '1900.'"

""Speed Racer" is a manufactured widget, a packaged commodity that capitalizes on an anthropomorphized cartoon of Capitalist Evil in order to sell itself and its ancillary products."

Three of the above quotations are taken from a three-star review of "Speed Racer." The other three are from a one-and-a-half-star review. Can you tell which is which? Perhaps the tone gives something away, but the descriptions of the movie, what it does and how it works, are strikingly similar. Clearly both of these critics saw the same movie, although one found the experience less daring, less exhilarating, than the other.

My family and friends are discerning movie-goers (we like all genres; we're down with the AFI 100). And we all, family and friends alike, thoroughly enjoyed "Speed Racer." It was a bit cheesy but I loved it as an old "SR" cartoon fan. My kids (16, 19) never really saw "SR" but enjoyed it just as well. My 16-year-old is a "chick flick" teenage girl and she raved about it! What I'm asking is, why do critics pan such movies? Isn't there a place for simple enjoyment and entertainment? Do you think that critiques of films may not always have the most useful criteria for judgment?

Advertisement
I am reminded of the episode of "The Dick Van Dyke Show" in which Laura Petrie (Mary Tyler Moore) accidentally reveals to the public that her husband's boss, TV comedian Alan Brady (Carl Reiner), is bald. In the end, he says he's a little relieved after all that he won't have to keep up the pretense. So, Laura suggests, it's actually good that she slipped up, right? Alan is amazed. Not only do I have to forgive her, he exclaims in wonderment, I have to thank her for it! That's kind of the way I feel about comments like the above. It's not enough that a critic accurately describes what he or she sees in the movie. That's almost immaterial to some people. They just get upset when the reviewer doesn't like it as much as they did! (To the Answer Man correspondent -- to everybody, actually -- I recommend this review.)

Star ratings -- the bane of many a critics' livelihood but not mine -- are fascinating to me. They color everything a reviewer who uses (or is required to use) them writes about a movie. Add or subtract one star (especially if it changes the "recommended" status between two and three stars on a four-star scale) and readers will interpret the same review quite differently. More will take issue with the star rating than over anything in the review itself, because they assume the stars themselves have intrinsic meaning, independent of anything the writer has written.

When I conducted my Funny Games Experiment (which was neither disingenuous nor premeditated until I had finished writing the review -- and thank you all, once again, for participating, whether you knew it or not), I chose to give that movie half a star because... well, because that was part of the experiment. Yes, I think the film is a total failure. I believe its premise is not only invalid but deplorable, smug and naive -- all three at once. Not only that, it's Michael Haneke's shot-for-shot remake of his own worst film. I'm more angry at him for wasting his time than for wasting mine, the way I would be if Martin Scorsese decided to spend the next couple years doing a meticulous shot-for-shot remake of his own "Cape Fear" remake.

But, come on, "Funny Games" is a film by Michael Haneke, one of the world's major directors, so how bad could it be, right? Not bad enough, I decided, to give it zero stars -- which would have been too much like the kind of transparently cheap provocational stunt that I felt the movie was trying to pull.

In an indispensable piece on the current state of movie critics and criticism ("In critical condition"), David Bordwell writes:

If I say that I think that "Les Demoiselles de Rochefort" is a good film, I might just be saying that I like it. But not necessarily. I can like films I don’t think are particularly good. [...]

The point is that evaluation encompasses both judgment and taste. Taste is what gives you a buzz. There’s no accounting for it, we’re told, and a person’s tastes can be wholly unsystematic and logically inconsistent. [...]

Taste is distinctive, part of what makes you you, but you also share some tastes with others. We teachers often say we’re trying to educate students’ tastes. True, but we should admit that we’re trying to broaden their tastes, not necessarily replace them with better ones. Elsewhere on this site ["The adolescent window"] I argue that tastes formed in adolescence are, fortunately, almost impossible to erase. But we shouldn’t keep our tastes locked down. The more different kinds of things we can like, the better life becomes.

I enjoy discussing, even arguing, about films with people whose taste or judgment differs from my own. It doesn't necessarily change anything, but I want to try as hard as I can to understand and be understood, to listen to what they're saying and to push and refine and articulate my own observations and feelings. (That's why I think writing in a blog format -- that allows reader comments and follow-up posts -- is more rewarding and more challenging than writing for print publication -- although, for me, the improvisational aspect of blogging and newspaper reviewing on a quick turnaround are comparably appealing.)

Many times I have said that I'm not terribly interested in a critic's "verdict" on a film, or where they splat on the TomatoMeter™. All that matters is what the writer has to say. Somebody's star rating doesn't affect the quality of their review any more than it does the quality of the movie I've seen. (Imagine: "Well, that was an unimaginative and unilluminating review that told me nothing about the film except that the writer has an opinion about it. But she was absolutely right about it -- it really is a three-and-a-half-star movie!")

To me, the star rating is the maraschino cherry on the sundae. I have no feelings one way or another about maraschino cherries. But if it's there, fine, I'll swallow it -- and it won't affect my experience of the sundae one bit.

Coming soon: A closer look at what's on the screen in "Speed Racer," regardless of whether somebody likes it or not.

P.S. The first, fourth and fifth excerpts above are from Glenn Kenny's review. The middle two are from mine. And I think 1.5 stars is generous. When it comes to stars, I'm not usually disposed to generosity, experience having shown me that about 80 percent of all movies are below average....)