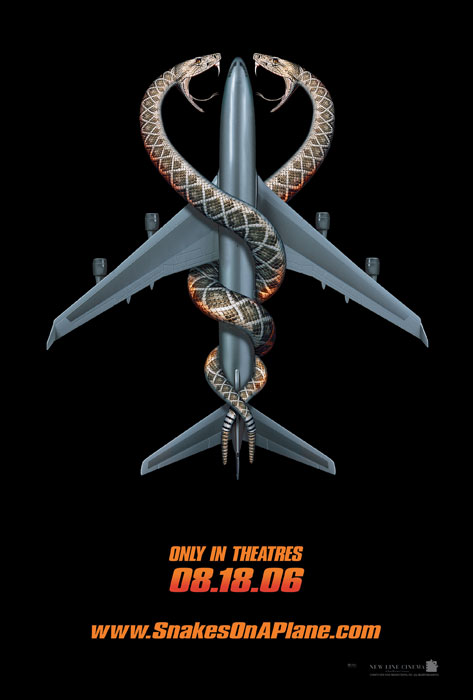 It's about snakes. On a plane, bitch!

Next, we saw the stories about how they went back and shot some additional stuff to get the film an R rating, and to give Samuel L. Jackson the requisite old-school Schwarzenegger-ish punch lines, like: "I want these m-----f--king snakes off this m-----f--king plane!" (Isn't this the same old joke as Dave Chappelle's ad for Samuel Jackson beer?)

OK, we recognize the package, and we know exactly what's in it. Jackson himself told Collider.com: "That's the only reason I took the job: I read the title. You either want to see that, or you don't." Well, maybe. It's not so much that I don't want to see it. It's that the movie doesn't open for two more months and I feel like I already have. I'm with my friend Leonard Maltin on this:

I would never steer anyone away from a movie who’s interested in seeing it; I don’t think that’s the function of a critic or reviewer. I hope people go and make up their own minds.

But I, for one, am already tired of the summer movie blockbuster season, when every film is built up as An Event. Can’t a movie just be a piece of entertainment? "Mission: Impossible III" was well-made and fun to watch, but it’s the cinematic equivalent of fast food: easily digested and just as easily forgotten. "Poseidon" had everything money can buy except characters worth caring about. "The Da Vinci Code" will be much talked-about for a few more days, I expect, and then gradually recede into memory, while really great thrillers like the Hitchcock classics will live on forever.

(To tell the truth, I haven't much wanted to see "Miiii" or "Poseidon" or "The Da Vinci Code" or "X-Men: The Last Stand" or "The Omen" (2006) or "Cars" or "Pirates of the Caribbean: Whatever," either -- in part for the same reason: All are blatantly derivitave products, from other movies or best-selling books or comicbooks, and I felt like I'd already sat through them before they even opened. Don't tell me these movies are Special Events. They are neither. They're routine summer product.) Meanwhile, for people who love movies: It's three more (long) months until the Toronto Film Festival....
Advertisement