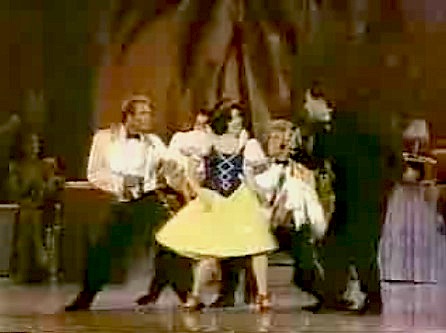 Oh, and so much more. Here's the ideal warm-up for Sunday's Academy Awards festivities: the infamous Allan Carr-produced 1989 Oscar opening number that also features Army Archerd, Merv Griffin, Roy Rogers and Dale Evans, Vincent Price and Coral Browne, Cyd Charisse and Tony Martin, Dorothy Lamour, Alice Faye, Lily Tomlin, and more stars than there are east of Hobart! (Just look at the celebs in the audience trying to conceal their mortification as Snow White touches and bleats to them.) I was just pining for this the other day, and once again YouTube has delivered! This, truly, is the vision of the man behind "Grease," "Grease 2," "Can't Stop the Music" and "Where the Boys are '84" -- all of which he made before the Academy hired him to produce the Oscarcast. No matter what happens Sunday, you can bet it won't top this, although somehow this mega-production-number almost seems quaint and naive by today's standards. Almost.

I had forgotten the new "Proud Mary" lyrics they wrote for Rob to sing to Snow (whose voice is more Billie Burke than Adriana Caselotti, if you ask me):

Now you made it big in the movies, Came to Hollywood, learned to play the game, You became a star, Miss Animated Mama Earned yourself a place in the Walk of Fame,

What I wouldn't give for Ellen Degeneres to begin the show as Snow White and bring on Rob Lowe for a reprise...

(Thanks to Chris for passing this along.)