How do you solve a problem like the Oscars? 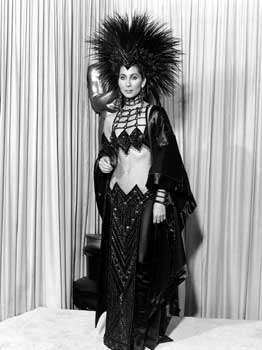 Almost every year for the last 20 or so I've had to think seriously about that question. I mean, what is there to write about the Oscars that hasn't already been done? I had a great time with my recent piece for MSN Movies ("Your Oscar speech: How not to blow it"), but I was fully aware I wasn't the first (or even, probably, the 1,000th) to write something similar in approach.

So, let's recap the angles: We can look at it as a horserace [check] and place bets on the odds [check]; as an election or popularity contest [check]; as a poker game [check -- I did that for MSN one year, with each nominee holding a "hand" based on previous awards-season honors]; as the "Gay Super Bowl" [check]; as a fashion show [check]; as Hollywood's version of "American Idol" [check]...

Some people would probably like watching the Academy Awards broadcast better if all the nominees gave speeches and the winner was decided by who gave the best one. (Maybe Academy members could call 900 numbers to vote for their favorites or there could be an Academy-approved panel of judges: say, Halle Berry, Cuba Gooding, Jr., and Roger Moore.) I find the speeches to be generally excruciating. (But, then, I thought the best Oscars ever was the Allan "Can't Stop the Music" Carr-produced one with Rob Lowe and Snow White because it was so astoundingly grotesque that I laughed so hard I cried. The Academy has tried to deep-six all evidence of that one, and Disney even threatened to sue over the use of Snow White. C'mon, YouTube!)

Here's another idea: A former resident of Mexico wrote to me with the following proposal:

In Older Mexican Award Shows, the recipient of the award was not allowed to speak. Each nominee was presented along with a few seconds of their song (or movie clip) and then the winner was named. The winner would walk on stage, accept the award, wave or blow kisses at the audience and then walk off stage. It was fantastic. The newer Mexican award shows are becoming more “Americanized” now unfortunately. Most now allow the winners to speak which just makes me long for the good old days. So I say Don’t Let Them Speak. We don’t care who you have to thank, who allowed this moment to happen, how much you love God, or how inspiring your parents were. All we care about is that you won…. And what you’re wearing. But that’s it!

I kinda like that. They could stretch out the Red Carpet Walk of Shame if they want, or even require that the major nominees do interviews afterwards, with Rosie O'Donnell or Dr. Phil or Chris Matthews. Sort of like the publicity clauses in actors' contracts that stipulate they must do a certain amount of promotion in exchange for their salary on a given film: If you want an award, you're going to have to submit to a sit-down with Brit Hume or someone similarly slimy and daft (and, preferably, as humorless).
Advertisement

And if they need to make the show itself longer (to sell commercial time), they could make "In Memoriam" last ten minutes or so (more clips!) and do even bigger, more vapid and elaborate musical numbers -- not for the best songs, but for ALL the top nominees!

The Oscars are about the show. It's entertainment, loosely defined. Nominees, it is not about you. It's about we, the millions (not billions) who watch the satellite-cast on TV and have parties with our friends and laugh and cry and sigh and gasp and ridicule. (If we don't have to work.) That's the only approach that matters.