A bleak January moviegoing week was rescued for me by an eight-year-old film from M. Night Shyamalan: "Unbreakable," which I just happened to run across on Starz HD On Demand (via Comcast -- also available through Netflix On Demand), finds just the right tone for its comic-book tale of a depressed and disillusioned man (Bruce Willis) discovering who he really is. Virtually every composition displays a cool use of space, and some revealing piece of detail, that makes it exciting to watch. The movie draws you in, piques your curiosity, zaps your senses and engages your rapt attention.

(NOTE: I don't recommend watching the Starz HD version, because it has been chopped down from anamorphic widescreen [2.37:1] to generic 16x9, resulting in cropping and panning-and-scanning of some crucial images, which drains them of some of their compositional voltage. Get/rent the DVD or Blu-ray disc. See examples after jump.) 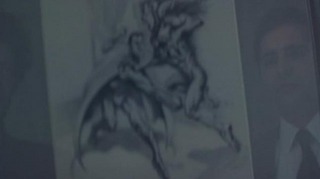 3) The pursuit at the stadium. (Is it just me or do the round wall and the light through the archways suggest a reel of film turning?) And the descent into the subway. (Why does a man carry a cane made of material that shatters? I don't care! It's a lovely effect.)

4) Mise-en-scene as montage. One shot. A man walks into a room. What does he discover? What do we?

There are many, many more inventive images, sequences and cinematic flourishes in "Unbreakable." I can't think of a dull scene in the picture. This is all the more gratifying because, although the movie is explicitly the tale of a comic-book hero discovering himself, Shyamalan doesn't fall back on "comic-book" imagery. Yes, he has lots of fun with frames (within frames within frames), but he concentrates on the dynamics within those frames, so that they're charged with energy. There's not much of the flashy cutting that's characteristic of currently fashionable choppy-chop-chop technique of which I am so not fond. Comics and graphic novels can only suggest movement in the compositions on the page. "Unbreakable" moves, fluidly.

(I don't want to "go negative" but where was this director's contagiously exciting film-sense during the making of "The Lady in the Water" and "The Happening" -- both comparable fantasies, though one is a children's horror-story and the other a horror/science-fiction fable?)

In his generally positive overview of the historical and cultural forms and formulas at work in "Slumdog Millionaire," David Bordwell writes that its "glazed, frenetic surface testifies to the globalization of one option for modern popular cinema. The film's style seems to me a personalized variant of what has for better or worse become an international style."

"Unbreakable" testifies, thrillingly, to a less ADD-addicted vision for commercial movies. No doubt some will find it "slow" because it requires watching. It doesn't fire itself at you. I doesn't shoot blanks, either. I didn't want to take my eyes off it.