WARNING: Big-time spoilers in the above video.

From the introduction to my fully explicated video, "Chinatown: Frames and Lenses," at Press Play, Chapter 4 in a week-long series: LIFE'S WORK: THE FILMS OF ROMAN POLANSKI:

Roman Polanski's "Chinatown" is a Panavision color film noir--a ghost story, really--about flawed vision and the inescapable resurgence of the past, made in 1974 and set in 1937.  Private eye Jake Gittes (Jack Nicholson) thinks he knows what's going on, but as Noah Cross (John Huston) tells him, "Believe me, you don't." We see what Jake sees, and it's invariably filtered or blocked--viewed from a distance through binoculars, or from outside through a door or window that obscures a more complete perspective. Photographs--snippets of time recorded on film, one of the tools of the detective trade--are potentially misleading because they don't--can't--capture what's going on outside of the frame, beyond the moment.

This video montage is a hymn of praise to a film that had a profound effect on me when I first saw it as a 16-year-old in 1974, and that I've lived with, haunted, ever since. It's also an unabashed love poem to the desperate, damaged and determined Mrs. Mulwray (Faye Dunaway).

Like "close-up," which I did in 2007, it's a free-associative critical essay/dream sequence, based on themes and images (and sound and music) from the movie. Although, like a lot of creative pursuits, the process of assembling it (from pieces of film that were already floating around in my head) was largely unconscious, I now (at least in retrospect) think I understand why each fragment is where it is.

So, I thought I'd turn around and look back at "Chinatown" through the lens (or frame or door or window, if you will) of my video essay, using it as a way of translating the film's images into critical prose. Because, in "Chinatown," every image is loaded with meanings, associations, resonances. If you're familiar with the film, you'll immediately see that this reflection on "Chinatown" isn't structured chronologically. Scenes, themes, moments and images keep circling back in fragments... not unlike they do in the film, but in a more condensed and less linear form...

Below: What it all looked like in iMovie HD when I finished it. 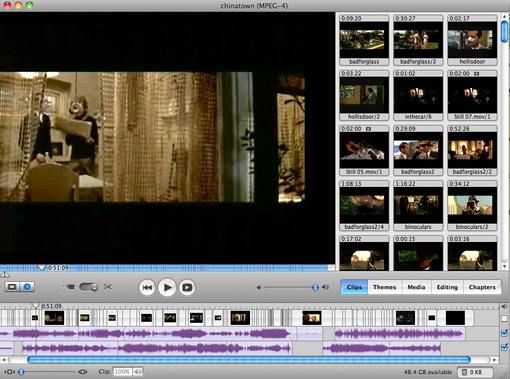