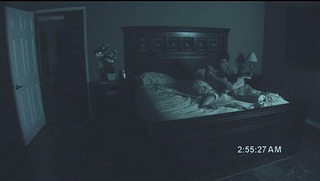 The scariest thing about "Paranormal Activity" is how it plays on your fear of being afraid. The funniest -- and naughtiest -- thing about it is the poster -- the shot of the occupied bed in the dark room above the title "Paranormal Activity." But it turns out that what goes on in and around that bed is indeed what interests the camera. It also suggests to me something Errol Morris raised in his nonfiction film about Abu Ghraib, "Standard Operating Procedure": Would all this be happening if cameras hadn't been present to record it?

Hold that thought for a moment, and let's look at the premise: Katie (Katie Featherstone) has recently shacked up with her boyfriend of three years Micah (Micah Sloat) in a newish San Diego tract home. He's just bought a new video camera because, well, there are a few things Katie neglected to tell him about herself. Like, for instance, how something -- a demon, probably -- has been following her since she was eight years old. OK, so here's the source of the conflict in their relationship now: He thinks that's kinda neat and wants to get it on video, so he can deal with it and get rid of it and rescue his gal. He sees himself as the Man of the House, the Protector, after all. She doesn't want to mess with it, and has contacted a psychic (by phone) who tells them that whatever's following Katie is not human, that demons are not his métier (he's a ghost guy), and that they should get ahold of this other fellow (a demonologist) who may be able to help them.

Meanwhile (and here come the movie's plot rules) his advice is: 1) don't bother to leave the house, because whatever it is wants Katie (so, this is not a Haunted House movie where all they have to do is vacate the premises -- there's no escape); and 2) don't invite it to communicate or taunt it with things like ouija boards and video cameras. (Also, don't get it wet or feed it after midnight, I think.)

So, the new camera is the pretext for the whole thing. The idea of using lo-fi spooky video footage to catch indistinct glimpses of supernatural phenomena isn't an original one ("The Blair Witch Project," people?), but in this case it provides a framework for a low-budget movie, shot in seven days in one house with five actors (the two leads and three minor players) on a budget of $11,000. When the camera isn't hand-held, it's mounted on a tripod (with a timecode in the lower right corner) at the foot of the bed, observing the room all night as they sleep, and that's where the eeriest stuff happens -- made creepier by having the characters watch the digital files the next day.² (And it's a letdown when we don't get to see their horrified reactions to what we've already seen.)

There are plenty of red (dead) herrings scattered about the house, too. The thing whispers, but nobody can tell if it's actually speaking any known language. Both Micah and Katie do research into demonology (though unfortunately they don't consult Hutch's recommended volume, "All of Them Witches"). There's a burnt pentangle and the anagrammatic spelling of what might be somebody's name, and maybe it has something to do with this girl they read about on the web who had something almost exactly like this happen to her. These things are merely set dressing, though -- of little consequence, because the movie's all about the bedroom camera.

The genius of "Blair Witch" was not the witch, or the movie itself, but the project -- the surrounding mythology, or Extended Universe, in "Star Wars" parlance. It was the first pop culture phenomenon to so thoroughly and successfully extend the movie experience into a virtual realm that included the web, a TV pseudo-documentary (on what was then known as the Sci-Fi Channel, but still lots of people believed it), video games and other media. Both films are presented as video documentary investigations of paranormal activity; the "innovation" of "Paranormal Activity" is that although it is obviously "edited" (with jump cuts, fast-forwarding and titles announcing dates and times) it is presented without any production credits at the start or finish to remind audiences that it's "only a movie." It begins with a white-on-black title thanking the families of Micah Sloat and Katie Featherstone and ends with a bulletin on the fates of the characters, followed by a long stretch of black leader and a subwoofer rumble until the bright blue MPAA rating [R] finally appears. (When DreamWorks bought the rights it reportedly intended to produce a star-vehicle remake and release the original only on DVD. The former would never have worked; the latter might arguably have been even more effective. Imagine letting this thing into your own house at night, the sounds and the video seeping into your own environment...) 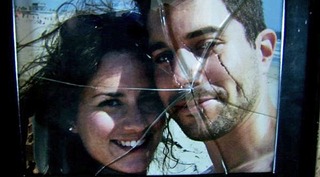 When I saw "Paranormal Activity," the teenage girls behind me could be heard crying quietly over the deep reverberation -- used throughout the movie to signal the presence of the eponymous Paranormal Activity. (It has no other name, per se, so I'm taking the liberty of using "eponymous" instead of the more commonly used "titular.") "No, I am not OK," one of them creaked. They left sniffling. Nobody was laughing, as is usually the case after a horror movie.

Me, I was less interested in what was happening to Katie and Micah (it should be obvious from my description that there's only one place for this to go) than in what the movie itself could possibly do for the "money shot." From one angle, it's the problem all horror movies face: the build-up -- the little, ominous manifestations of menace that create an atmosphere of dread, like a shadow or movement that has no explanation -- is almost always scarier than when the threat becomes overt. That's what I mean when I say the movie is about the fear of being afraid. It's what you don't see that terrifies you. Perhaps that's why, throughout the film, I always felt the characters were safe as long as they remained within the frame. The most truly horrific stuff felt destined to take place off-camera.

For most people I know who were frightened by "The Blair Witch Project," the most terrifying thing was catching sight of Mike standing in the corner. "Paranormal Activity" goes a little further (never fear -- I'm not going to say how). And when it does -- when you can see, more or less clearly, what's going on -- that's when it becomes the least scary. For me, anyway. It's a kind of formal experiment in terror that pays off in some ways, but can't in others by the very design of the experiment's rules and restrictions. (I kept thinking of Lars von Trier's "The Five Obstructions.") For some, the cinéma vérité-style use of the video camera is a device that helps to immerse them in the action of the film; for me (in "Paranormal Activity," at least), the rigorousness of its operation as a self-conscious device, a formal "obstacle" (or, if you prefer, "gimmick") introduced by the filmmakers, kept me at some aesthetic and emotional distance from the experiment (not unlike the POV camerawork in Robert Montgomery's 1947 "Lady in the Lake," or the long takes that make Alfred Hitchcock's 1948 "Rope" appear to play out in a single unbroken shot). 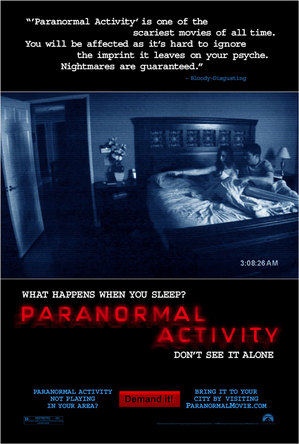 There are some spine-tingly touches -- things that remind me of moments in much better and more frightening movies, including "Repulsion," "Rosemary’s Baby," "The Exorcist," "The Tenant," "Poltergeist" -- all of which involve things that go bump in the night perceived by a person or persons who may be possessed and/or cracking up. "Paranormal Activity" wrings variations on just about every haunted house movie ever made (including the one below), too: objects that move of their own accord; lights, TV sets, faucets that turn on or off spontaneously; and, of course, the Thing In the Attic. (This is San Diego -- they don't have basements.) Here it's not enough to say "Don't go into the attic" because we already know it doesn't matter where they go. The thing is with Katie (as it is with Carole, and Rosemary, and Regan, and Trelkovsky and Simone Choule), and there's no getting away from it. If it isn't in the attic it will just be somewhere else, so you may as well go into the attic and see what's there. (Nevertheless, they keep saying they're going to call somebody and get some expert assistance, but they don't follow through, allowing the flimsiest excuses -- so-and-so is out of town for a few days -- to derail them. You'd think they'd be more desperate than that.)

Finally "Paranormal Activity" does, in fact, go for the money shot, and it turns out to be a fairly predictable one. (Or, at least, a fraction of a second after it happens, you think: "Yeah, that's about what I expected" -- perhaps a corollary to Stephen King's Ten-Foot Bug Rule¹). I guess I see the necessity of providing a certain amount of artificial "closure." If the movie had ended at its most frightening moment (an off-screen scream that abruptly goes silent) the audience would probably have felt cheated. As it is, the silence is followed by the sound of footsteps. Like the entrance of The Bear Jew in "Inglourious Basterds," this is supposed to create apprehension and suspense. But it's doomed to be anticlimactic, I think. You already sense, from watching the movie to this point, that it won't be able to pay off like, say, the final revelation of "Don't Look Now," or the Edvard Munch scream that ends "The Tenant," because you already know it doesn't have what it takes to come up with those kinds of images. So, it ends with a "Boo!" -- not a whimper. And that isn't quite enough to do anything but confirm what you suspected all along.

"But I do want to say something about imagination purely as a tool in the art and science of scaring the crap out of people. The idea isn't original with me; I heard it expressed by William F. Nolan at the 1979 World Fantasy Convention. Nothing is so frightening as what's behind the closed door, Nolan said. You approach the door in the old, deserted house, and you hear something scratching at it. The audience holds its breath along with the protagonist as he/she (more often she) approaches that door. The protagonist throws it open, and there is a ten-foot-tall bug. The audience screams, but this particular scream has an oddly relieved sound to it. "A bug ten feet tall is pretty horrible," the audience thinks, "but I can deal with a ten-foot-tall bug. I was afraid it might be a hundred feet tall."