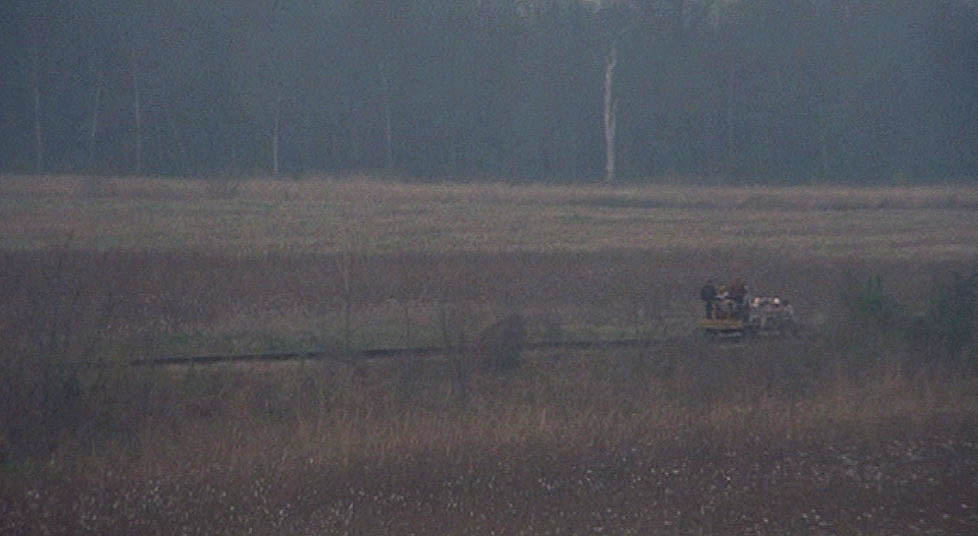 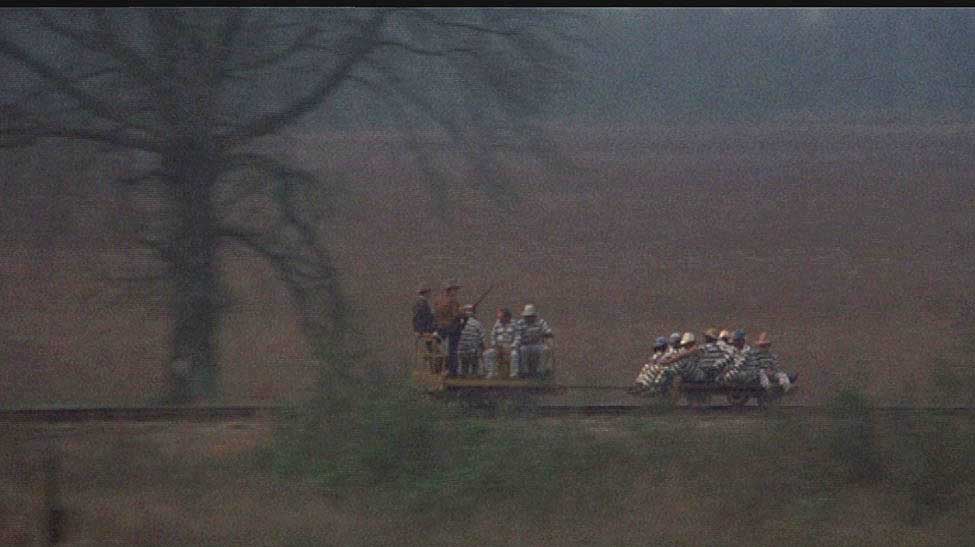 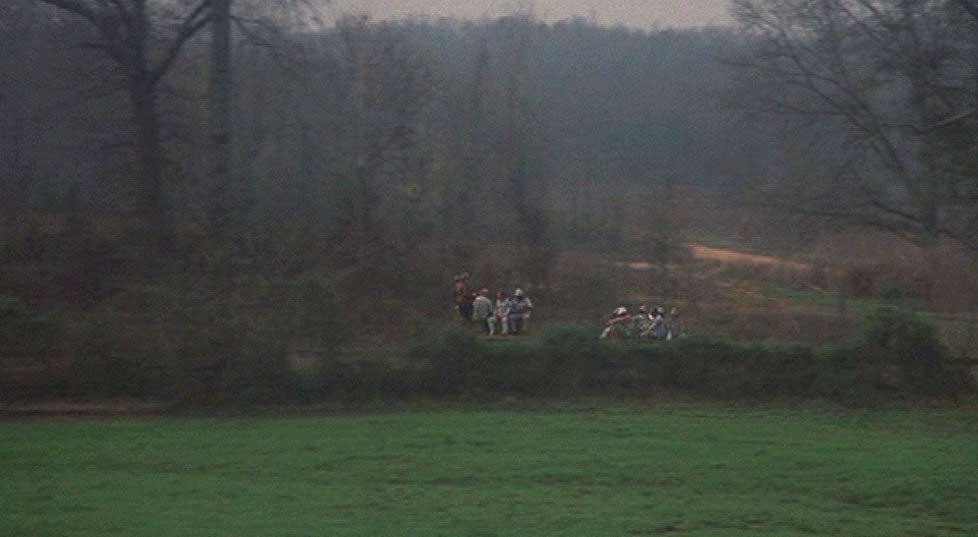 When Jim invited me to participate in this survey, I accepted with enthusiasm and then immediately began to worry. Every example of a great opening shot that was coming to mind ("Touch of Evil," "The Player," "Shadow of a Doubt") had already been pawed over and written about to such a degree that I certainly didn’t think I would have anything more to add to the discussion that hadn’t already been said, and far more eloquently than I would be able to say it. And as I continued to drag my feet, I saw some of the off-the-chart top choices I had come up with ("Dazed and Confused," "Kiss Me Deadly") get snapped up and written about, again, quite eloquently, by others. Now, after digging through my DVD and laserdisc collection, I’ve finally come up with what I think are some great ones, and as usual I haven’t the discipline to hold myself to just one.

UPDATED WITH FRAME GRABS (07/14/06) JE: Dennis, the owner and proprietor of Sergio Leone and the Infield Fly Rule, of one of my favorite movie blogs, has contributed several great shots and analyses. I'm going to spread 'em out over the next few weeks or so -- and try to get frame grabs for 'em. I hadn't seen "Thieves Like Us" since I showed it in the ASUW student film series at the University of Washington in about 1980, and it isn't available on US Region 1 NTSC DVD -- but I found a German Region 2 PAL version through an Amazon.com z-shop importer, DaaVeeDee. 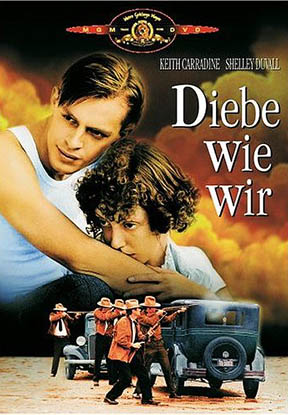 "Thieves Like Us " (Robert Altman, 1974; photographed by Jean Boffety) Robert Altman has had more than one rich, visually stunning opening shot in his long career. From the Panavision image of helicopters racking into focus to kick off "M*A*S*H," to Rene Auberjoinois’ mysterious lecturer announcing a series of avian themes and questions while surrounded by bird skeletons and other classroom at the beginning of "Brewster McCloud"; from Elliot Gould’s Philip Marlowe stretched out on a bed, counteracting the proactive image of Raymond Chandler’s private eye to the strains of “Hooray for Hollywood" [and "The Long Goodbye" -- ed] to open "The Long Goodbye," to the K-Tel-esque record commercial that serves as the opening credits of "Nashville," to the raising of the flag by bugle call leading into the staged massacre that opens "Buffalo Bill and the Indians, or Sitting Bull’s History Lesson" (proclaimed on-screen with satiric bombast as “Robert Altman’s Absolutely Unique and Heroic Enterprise of Inimitable Lustre!"), Altman knows how to kick off a movie.
Advertisement

One of his most beautiful opening shots, however, occurs at the beginning of "Thieves Like Us," a shot that artfully prepares us for the somber mood, the deliberate, unhurried pace of the film as a whole, and its naturalistic attitude toward the story it intends to tell, that of the doomed relationship between a young escaped convict and the naive young woman with whom he falls in love. 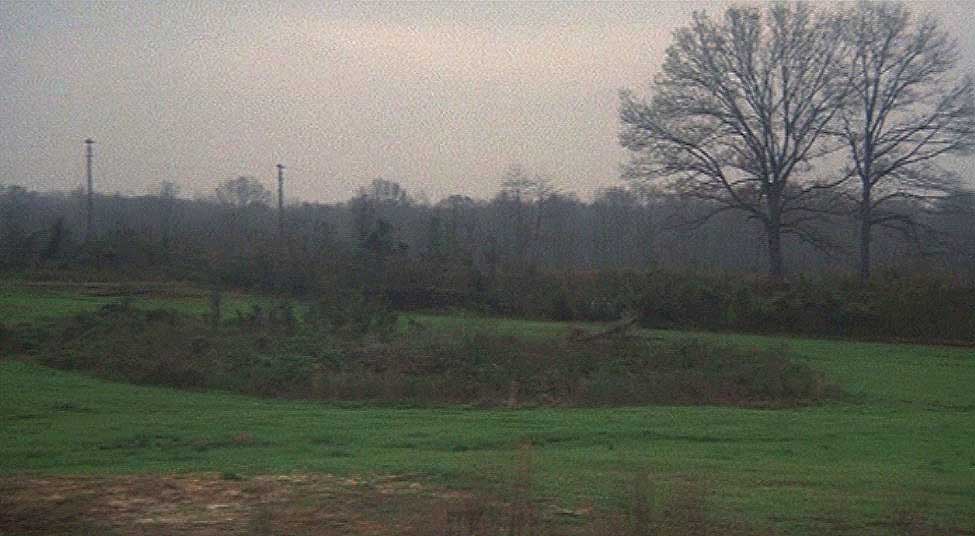 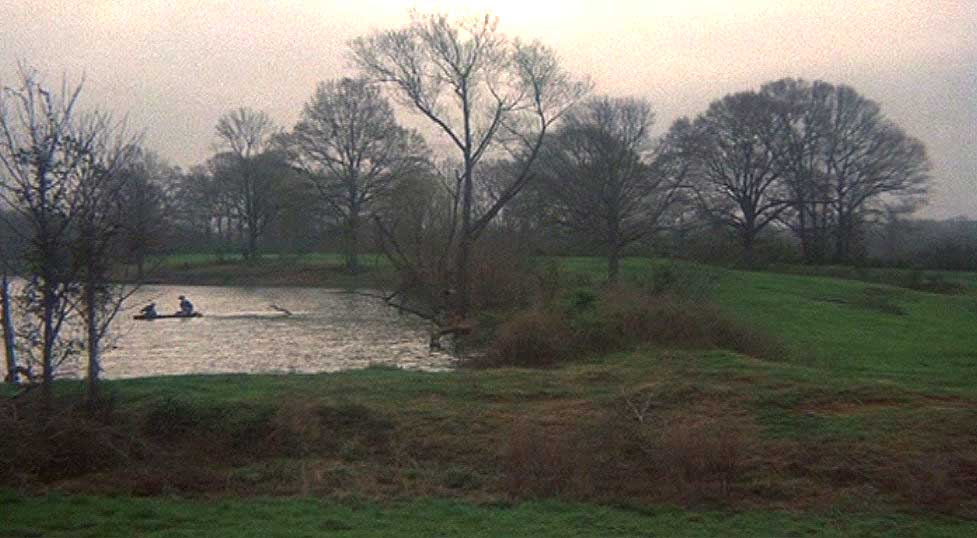 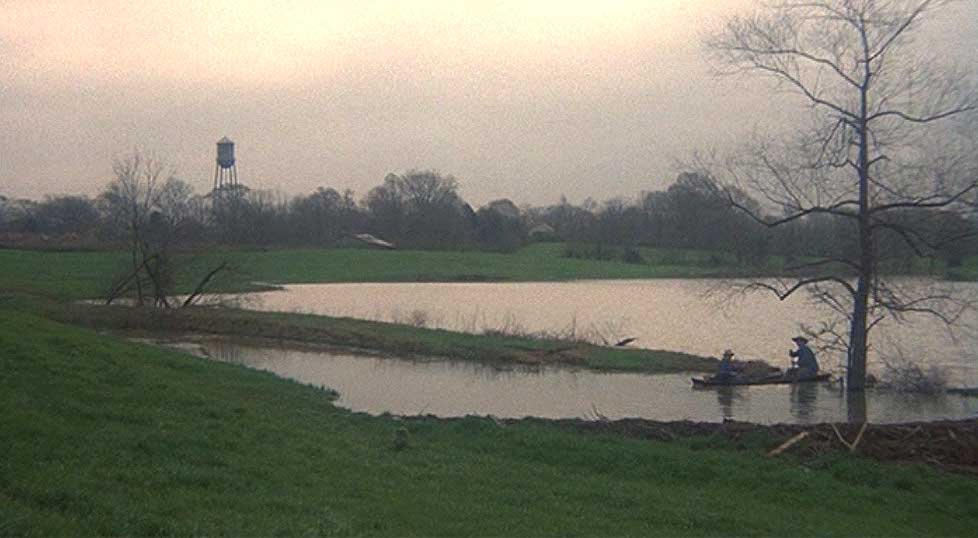 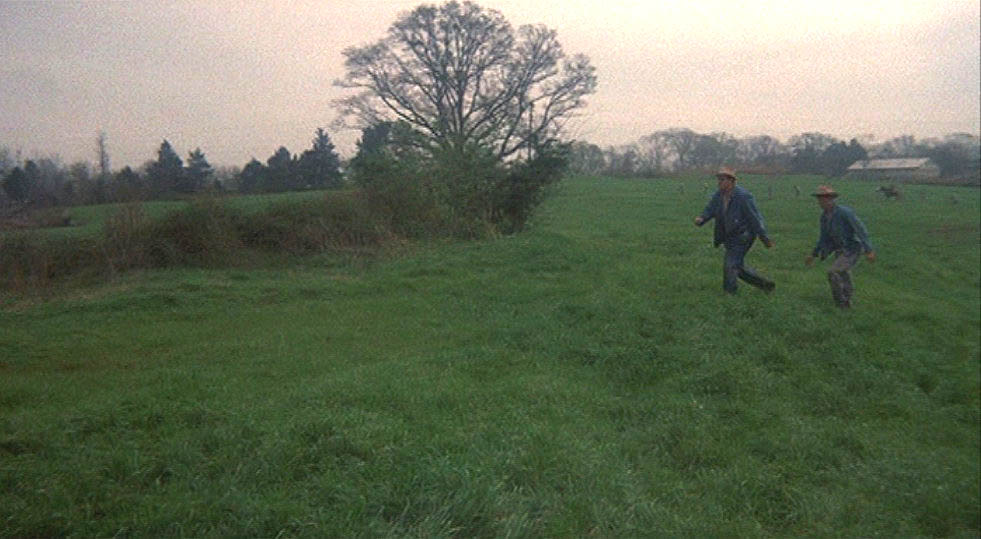 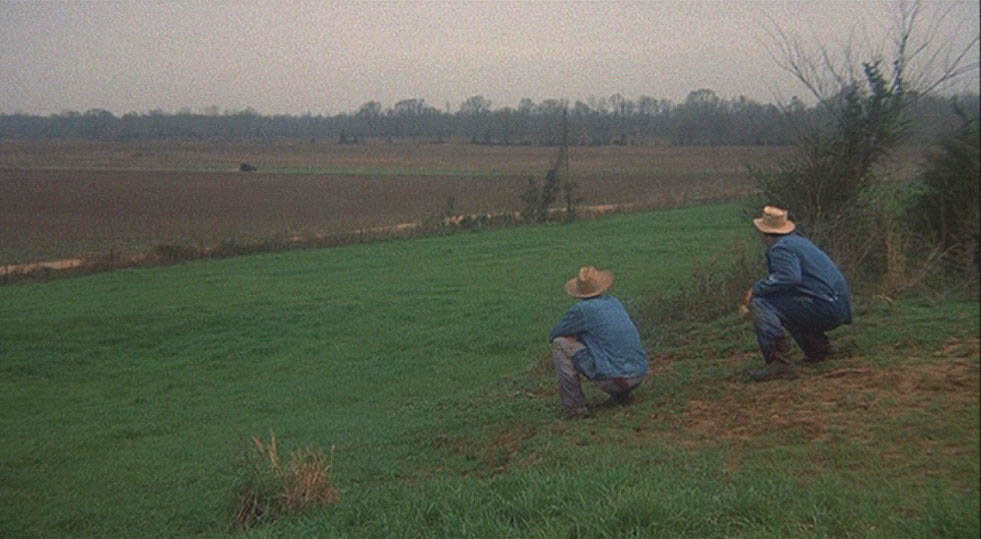 As is often the case in an Altman film, we hear some ambient or film-related sound layered in underneath the studio logo — this time there are crows heard cawing underneath the United Artists logo. The shot fades up on an open stretch of field, backed by a thicket of forest and bisected horizontally by a length of railroad track. A handcar enters the frame and travels from right to left silently. Two men sit at the head of the car, dressed in matching brown jackets. On the floor of the car sit at least ten men, dressed in prison stripes. As the car gets closer we can see the men in brown are carrying rifles.

The camera begins a slow pan right to left in order to follow the car. A thicket of trees passes in between the camera and the car as it purposefully moves along the track. The handcar crosses a road where a pickup truck, ‘20s vintage, sits near the railroad crossing, no one inside. The car continues right to left and begins receding away from the camera, which continues along right to left and onto an expanse of green field. The car disappears in the distance as the camera continues discovering this new landscape -- there are more trees, the ground is broken up by patches of rough soil and hilly contours and patches of dry brush. Suddenly we see a lake, and on that lake a boat occupied by two men. The camera continues to pan, following the boat’s progress as the men row toward shore and make a sharp left toward the nearest bank.

The camera, for the first time since the shot began, stops its pan in order to observe the men as they silently approach. There is a water tower and some small buildings visible through the trees off to the left. The camera begins to slowly move again, tracking ever so slightly the movement of the boat. We can now hear the conversation taking place between the two, but it is unclear exactly what is being discussed. It turns out, unsurprisingly, that the men are talking about fishing. (“The best time to go fishing is in the rain," says the larger of the two men.) As they make shore, the camera continues its familiar right-to-left pattern. The water tower still looms in the background, unassumingly part of the landscape—the men are clearly on or near farm property. There’s a horse visible in the background, off to the left, and we slowly realize that there are prisoners working beside the horse too, and that the man on the horse is the work detail guard. The men pay no attention to the prisoners though—they get out of the boat and the larger man says, regarding their haul of fish, “Not a bad day’s work." The smaller man agrees. The larger man then tosses the fish on the ground near the shore and says, “You fellas take care of the boat."

Clearly, these fishermen are not concerned with cleaning and eating their catch. As the two move quickly up the hill right to left, the lager man continues: “I know they’re not gonna be here." The smaller man replies: “They might." By now they’ve moved up to the crest of the hill, alongside a road, and the larger man, seeing no one there waiting, says, “I told ya! They’re not here." Smaller man: “No, look. See? There." Larger man: “Where?" Smaller man: “There." The men settle on a top of the crest looking down over the far edge of the very same open stretch of field that began the shot. We now realize that the opening shot has been one big circular motion—the field this time divided by opposing angles of road, rather than railroad track, down which travels a car that the men are very intent upon observing as it moves closer. Larger man: “Who’s drivin'?" Smaller man: “Who was that guy that sells marijuana? The prison guy." Larger man: “Jazzbo?" The opening shot ends with a cut to a closer shot of the car as it barrels down the road toward the place where the two men are squatting. The men have revealed themselves, within the confines of this gorgeously choreographed opener, as very calm, cool prison escapees. And this information has been directed to us in a way that provides pieces of this minor puzzle of identification all the through the duration of the shot, so that by the end we know the basics of these characters and their situation, and does so poetically, and antithetically to the approach that most any other director, who might feel compelled to show us the suspenseful escape or some violent occurrence along the way, might choose to take.