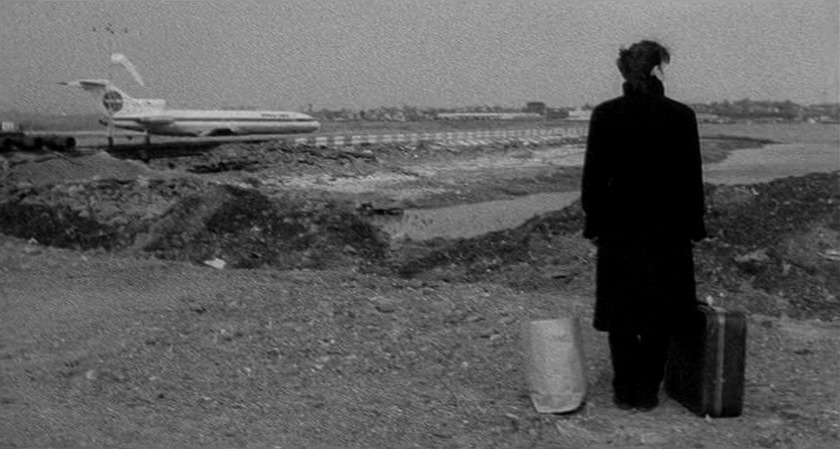 Eva in The New World. 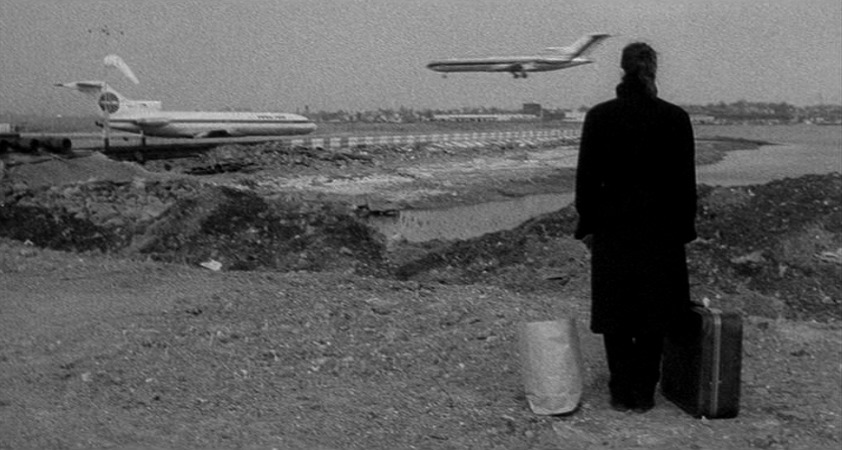 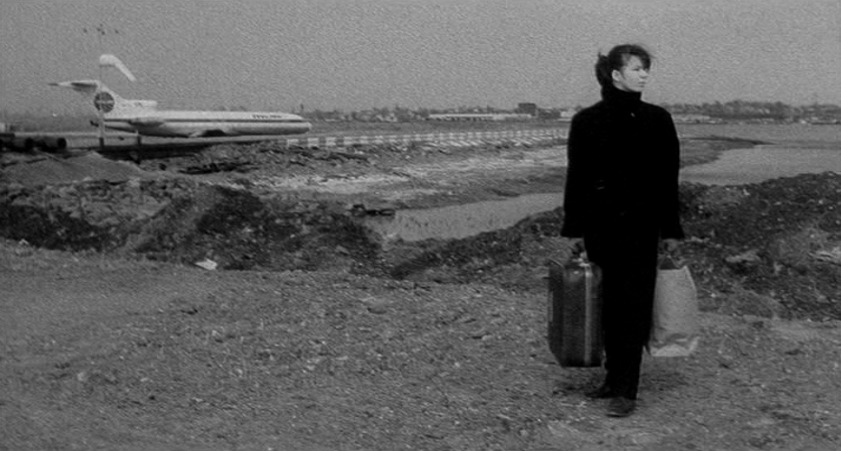 In terms of narrative structure, the opening shot of Jim Jarmusch's "Stranger Than Paradise" is a perfect "mini-movie." The film opens with a shot of Eva (Eszter Balint, seen from behind) standing to the far right of the frame; in the background, we see a plane park on an airport runway. Eva watches a plane land, very slowly picks up her luggage (a ratty suitcase and a shopping bag), turns around (glancing around in almost a full circle) then walks (again, very slowly) left and towards the camera until she exits the frame.

The shot lingers, however, long after Eva has departed to witness the parked plane as it begins its takeoff. Here is the entire story laid out in miniature: "Stranger Than Paradise" begins with an arrival by plane (Eva coming to America from Hungary) and ends with a departure by plane (Willie [John Lurie] flying to Budapest). 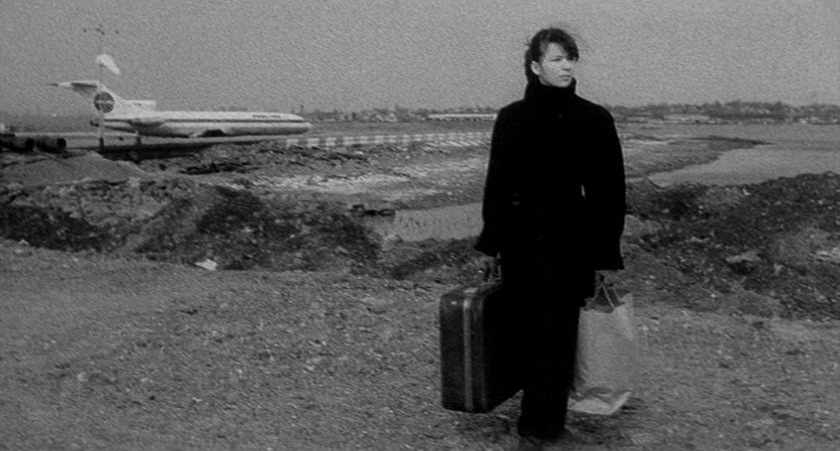 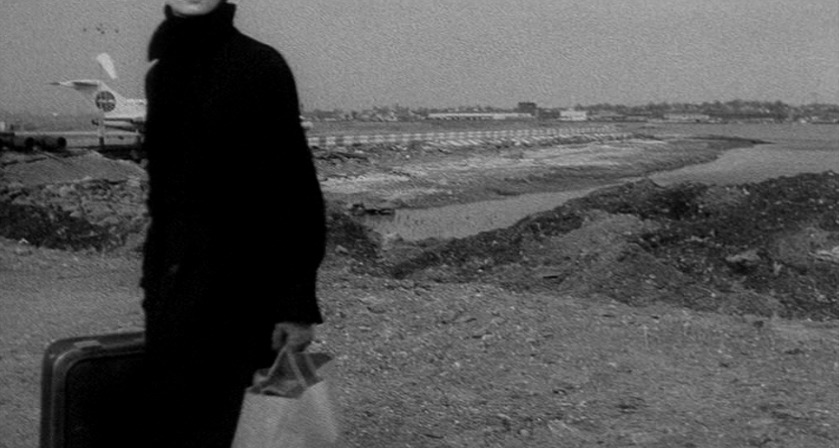 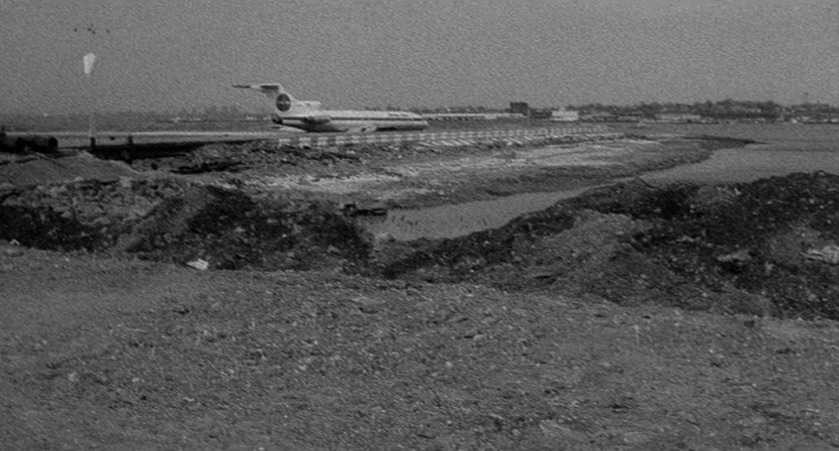 The fact that we first see Eva situated so far to the right edge of the frame suggests that she has just arrived (in the frame and, also, in America) and also leaves a gaping void in the foreground of the left two-thirds of the frame, one that is destined be filled by the other two main characters in the film. Her near full-circle look also demonstrates the sense of disorientation she feels in "The New World." It is also no coincidence that we see her walking from right-to-left in her first several shots, as this mirrors her journey across the Atlantic. Is it a coincidence that, in the final shot of the film, Eva (again seen alone) sits all the way to the left of the frame, thus completing her journey? Maybe so, but it sure feels right.

Jarmusch also establishes the rhythm of the film here: this is a static long-take like most of the shots in the movie (there are some tracking shots but, in general, minimal camera movement and no analytical editing) and the action is slow and languorous. Jarmusch's use of scale in this shot also sets the tone for a film with empty, featureless spaces. Of course, you could argue that the real opening shot of the film is the black screen that figures so prominently in the film, which itself might be an even more concise encapsulation of the movie's theme!

JE: I can't describe precisely why, but your appreciation of this shot brings tears to my eyes. In part, it's because you capture the approximately 47 seconds during which I fell in love with this movie the first time I saw it. (I fell in love with Eszter Balint a few shots later, when she methodically sets down her bags, pulls a cassette recorder out of the paper sack, pushes "PLAY," picks up suitcase, paper bag and tinny-sounding cassette by their respective handles with her knit-gloved hands, and Screamin' Jay Hawkins begins wailing: "I Put a Spell on You.") This was one of those movies I felt was made just for me. (And that reminds me, I have some personal reminiscences about playing the film first-run in our Seattle movie theater in early 1985, and about Eszter coming to visit for a few days, that I've been planning to write about here. Later.)

What a perfect choice (and if you hadn't chosen it, I would have): a black and white gem (Wim Wenders supposedly provided film stock with the short ends from "The State of Things" -- you can certainly see the Wenders influence in that opening shot), made up of discrete shots, each separated (discreetly) by black leader. Couldn't ask for anything better than this.