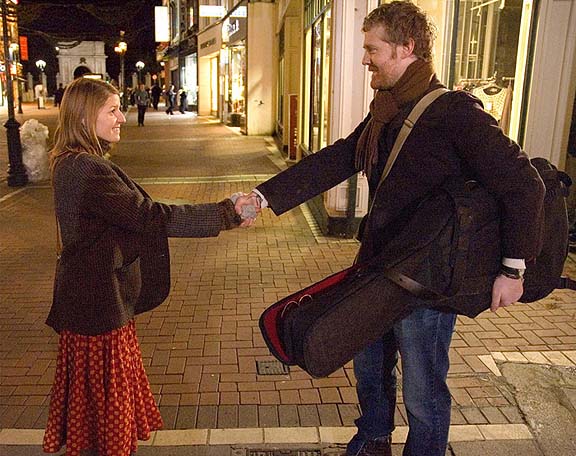 After an investigation on the eve (literally) of the official Oscar ballot mailing, the executive committee of the Academy's music branch "has met and endorsed the validity of 'Falling Slowly' [from 'Once'] as a nominated achievement. The committee relied on written assurances and detailed chronologies provided by the songwriter of 'Falling Slowly,' the writer-director of 'Once' and Fox Searchlight" [the film's US distributor]. For details, see "Is Once ineligible for Best Original Song Oscar?" below.

The issue centered on whether the song was actually written for "Once" (as Academy rules require), or for the 2006 Czech film "Kráska v nesnázích" ("Beauty in Trouble"), or in some other context. In addition to its performance by Glen Hansard and Marketa Irglova in "Once," "Falling Slowly" appeared in various versions on three 2006 albums: Hansard and Irglova's "The Swell Season," the "Beauty in Trouble" soundtrack album (also sung by Hansard and Irglova), and "The Cost" by Hansard's band The Frames.

According to David "The Carpetbagger" Carr at the New York Times, music branch chairman Charles Bernstein released a statement about the evolution of "Once" and "Falling Slowly":

“The genesis of the picture was unusually protracted, but director John Carney and songwriter Glen Hansard were working closely together in 2002 when the project that became ‘Once’ was discussed. ‘Falling Slowly’ began to be composed, but the actual script and financing for the picture was delayed for several years, during which time Mr. Hansard and his collaborator Marketa Irglova played the song in some venues that were deemed inconsequential enough to not change the song’s eligibility.”

Whether one of those inconsequential venues included the film "Beauty in Trouble" was not immediately clear. But perhaps "Once" will benefit from this extra burst of publicity. Final Oscar ballots were set to go out tomorrow (Wednesday, January 30, 2008).