Oh, go ahead and jump 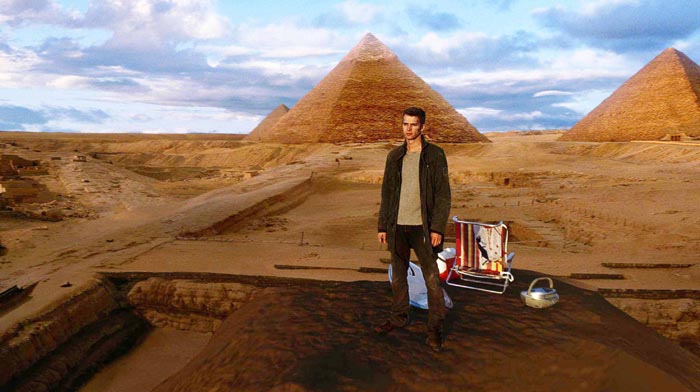 A world traveler for whom geography means nothing.

My review of "Jumper," the new movie from director Doug Liman ("Swingers," "Go," "The Bourne Supremacy," "Mr. & Mrs. Smith"), is at RogerEbert.com. Here's an excerpt:

In a world gone horribly wrong, where actions have no consequences, where all of humanity has become unaccountably oblivious to blatant violations of the time-space continuum, where rules exist not to be broken but to be disregarded, where continuity is irrelevant... anything is possible!

There you have the premise for Doug Liman's "Jumper: The Prequel," a movie so silly you may find yourself giggling helplessly even as you wish you could magically transport yourself almost anywhere else in the world but where you are, in front of the screen showing it.

And here's an interesting take on the movie from an entirely different angle by James Hannaham at Salon, who wonders what kind of signals "Jumper" sends to the rest of the world about Americans:

In a twisted fashion, when films like "Jumper" go abroad, the outside world often responds in a counterintuitive way -- and sometimes this can be devastating. I am not the first critic to suggest that the disaster films of the '90s helped to inspire the terrorist plots of the early 21st century....

While the film industry means to provide a cheap thrill to a few boys in Nebraska, it also shows the rest of the globe how mainstream American kids conceive of themselves, what they desire and aspire to, and especially what they fear. It's no small thing to reveal the psychology of your nation. [...]

Though dazzled by its ultra-modern wizardry and the high gloss of its production values, one can also feel the globalist double standard roiling underneath the adolescent-kid fantasy plot. "Jumper" tells us that Americans fantasize about getting rich by stealing and going everywhere they want without restrictions; that they are materialistic, disrespect foreign antiquities, and remain blind to their own and to world history, not to mention current conflicts (the jumpers spend a moment in Chechnya -- you bet they're not off to Iraq); and that they perhaps feel only mildly guilty about any of that. OK -- who wants to wait here for the world's response to that message?