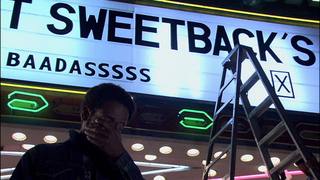 "The truth is, Black History Month was started by Dr. Carter G. Woodson, a Black historian fed up with the lack of historical representation of people of color. In 1926, he pioneered Negro History Week, putting it on the same week as Lincoln and Frederick Douglass' birthdays. That's how February became associated with Black History Month, not some attempt to play us cheap. So, my apologies to Dr. Woodson. Mea culpa to the Man as well, though as my Mom used to tell me after erroneously beating my ass for something I didn't do, "you probably deserved this for something I didn't catch.' "

Odienator is back, and he's beautiful! The self-described "bald, Black, half-blind kid" has returned to Big Media Vandalism for his second annual "It's Black History Mumf, Odienator" Film Festival, aka "Odie 2: Electric Boogaloo." (And he's filing some of it from a business trip to Dublin, Internet willing!)

"Since Obama has made Black History every month until at least January 2013," he writes, "I am now claiming February as my own." Yes he does. So far you'll find inimitably Odienesque personal essays on "Devil In a Blue Dress," "Beat Street, "Baadasssss!," "Eve's Bayou," "Cotton Comes to Harlem,"Something the Lord Made," "Lady Sings the Blues," "I'm Gonna Git You Sucka," Scary Black Movies (including "Blacula," "Abby" and "Candyman") -- and appreciations of "Sanford and Son," actor Roscoe Lee Browne, and the late Bernie Mac, Isaac Hayes and Rudy Ray Moore, aka Dolemite. (Odiebama also makes a couple guest appearances.)

Odienator's range is mighty impressive. He recalls his first exposure to Melvin van Peebles' landmark "Sweet Sweetback's Baadasssss Song" when he worked at a video store that had a VHS copy:

Our store had first run features, but we specialized in the stuff you couldn't get from Blockbuster: Blaxploitation, karate flicks, Cantinflas movies and porn. The owner would buy one copy of a video and then make and rent 17 copies of it. This was back when video cameras were too damn big to sneak into a movie theater to record the movie off the screen. I got a sense of meta merging with ghetto fabulousness whenever the FBI Warning appeared on one of those videotaped copies, and I'd snicker at the mere thought of Macrovision (which obviously could be outsmarted). I watched guerilla filmmaking on a bootleg video tape and I had the same reaction I did when I watched "Sweetback" decades later on a DVD I purchased: What the hell did I just watch?

I try to view older movies in the context of the time in which they were made. This is not only for historical purposes; it's a defense mechanism. On one hand, I'd like to understand the mindset of a viewer sitting in the theater at the time. I ask myself questions: Was the shower sequence in "Psycho" (1960) as shocking to audiences as it was to us when that "Alien" burst out of John Hurt? How much more powerful was the audience's reaction in 1967 than mine was years later when they saw Sidney slap the taste out of that rich White man's mouth in "In the Heat of the Night"?

On the other, I need to protect and prepare myself, not only for what I may see my fellow minorities doing on screen, but for what the White characters playing them might be doing as well. Most of the time, I roll with the punches and it doesn't ruin a classic ("Gone With the Wind is the best example I can provide). Sometimes, as in "Holiday Inn," "An Affair to Remember," "Guess Who's Coming to Dinner" or "Breakfast at Tiffany's," it gets to me on the level it must have gotten to Melvin van Peebles.... 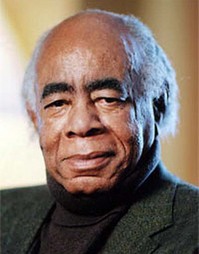 Of Roscoe Lee Browne, one of my favorite actors, he writes:

When one thinks of a Black actor known for his voice, James Earl Jones usually springs to mind. Not to take anything away from Mr. Vader, but the first answer I think of in this mental equation is Roscoe Lee Browne. Perhaps this is because, if the notion a baby can hear in the womb is true, then Browne's is one of the last voices I heard before I was born. My mother went to see William Wyler's last movie, "The Liberation of L.B. Jones," the day she went into labor with me. That's a nice story, but the more logical reason is that Browne's voice is a shining example of great erudition and enunciation. It's a voice that his appearance aged into, for in his younger days it was jarring to hear it emanating from something that looked so ghetto. Young or old, this beautiful voice possessed the skill to cut you down with a well-timed remark, in comedy, tragedy or even reality: In response to a director's comment that he "sounded White," Browne said, "We had a White maid."

I hope you're familiar with the sonorous tones of Browne. If you are, you'll hear him saying that and smile...