O, the absurdity! O, the ambiguity! 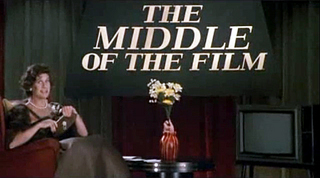 Wednesday, IMDb linked to my "Eleven Worst Ambiguous Movie Endings" post, and the comments from readers unfamiliar with the way we do things 'round here have been hilarious and disturbing. To spare embarrassment for those who seem to have unconsciously gotten the point even if they didn't get the joke, I decided not to post a few of their comments, such as:

"This article is dumb. Do you really, actually need all that stuff explicitly explained to you? Maybe you should stop watching movies--or at least stop writting [sic] about them."

Good advice, but not very good criticism. (I maintain that "This article is dumb" is a less-than-meaningful assertion in this context, and I'm wondering if "writting" is something one does in 140 characters or less.) Now that I think about it, I kind of wish I had entitled the original post "The Eleven Most Ambiguous Movie Endings," since the idea of ranking things by degrees of ambiguity is pretty funny to me. That probably wouldn't have helped with the comments, though.

The most egregious responses echoed the kind of cluelessness that was being skewered, so it's not surprising the authors couldn't see the forest for the trees. Some of us are not accustomed to reading (or, by extrapolation, listening, watching) very closely. Or we start typing before we've begun thinking. There are blatantly incongruous red flags all over the story, contradictory comparisons and phrases so outrageously nonsensical that I'd have thought nobody could possibly have misunderstood the intent behind them. I wasn't trying to fool anybody -- and many of the comments from readers who responded in the spirit of the post were hilarious. (Others found the thick-headed comments more amusing than the post itself.) But once the piece popped outside the specialized movie-blogosphere, general-interest "surfers" (remember that term?) seemed to skim it without noticing the meanings of the words (or lack thereof). They took it at face value... even though it clearly had no face value. The only way it can be understood is as satire -- of myopic complaints about "ambiguous" (or, more precisely, unconventionally unsatisfying) movie endings. There are no other op-