Noir at its nastiest: The Killer Inside Me

Michael Winterbottom's adaptation of Jim Thompson's "The Killer Inside Me" is one of the deepest, darkest films noir ever made -- an unflinchingly nasty, nihilistic piece of work that pulls no punches, literally or figuratively. This is what noir is all about: facing the worst possibilities of human nature, a bottomless sense of dread that makes you feel like you're drowning in fetid bog of blood (see "Macbeth"). And it's all your fault, the undeniable consequences of following your own overpowering desires, of making your own messy mistakes. And maybe some rotten luck -- the kind you invariably bring on yourself.

Not that we totally identify with our deadpan sociopathic narrator and main character, but that's precisely what happens to Lou Ford, the clean-cut young deputy sheriff of Central City, Texas, (Casey Affleck, in another masterful performance to rank with his work in "Gone Baby Gone" and "The Assassination of Jesse James By the Coward Robert Ford"), a small-town psycho with a taste for compulsive, 1950s pulp sadism (really dirty, dangerous stuff -- let's say S&M without the safe word). One murder becomes necessary to cover the previous one until Lou is stepp'd in blood so far that, should he wade no more, returning were as tedious as go o'er.

Lou is a blank -- and one of the most chillingly convincing sociopaths I've ever seen in the movies. He's genial and well-mannered, with a crackling, high-pitched, affectless (not to say Affleck-less) voice that comes out of him like a slow leak. It's not that we don't get "inside his head" (as some have complained), it's that we are inside his head and there's nobody in there. Or the original occupant is long dead. Thompson's title says it all, and the movie has the integrity to respect it: "The Killer Inside Me." Notice that "killer" and "me" are separate words, occupying the same psyche.

The movie's strategy is not to explain or rationalize Lou's motivations, in advance or in hindsight, because Lou is telling the story and he does things for his own reasons. Since the narration is his interior monologue, he has nothing to explain. That means the violence, when it happens, is not enjoyable or cathartic or justified -- it's just brutal and shocking and senseless. It's painful and upsetting -- the way violence is, though hardly ever in the movies -- and, of course, it's got some people confused because they didn't like it. That should tell them the movie takes it seriously.

I would suggest that "The Killer Inside Me" succeeds where Michael Haneke's "Funny Games" (in both nearly-identical versions) was too obvious and schematic to be persuasive. Winterbottom's movie pulls you inside its narrator's story, and delivers exactly what it promises. But it isn't fun. Apparently people have walked out of screenings in disgust.

Think of the scene between Marty Augustine and his girlfriend Jo Ann in Robert Altman's "The Long Goodbye" (1973). Then repeat. Again. Again. Again. Or Lee Marvin throwing the pot of hot coffee in Gloria Grahame's face in Fritz Lang's "The Big Heat" (1953). Or Richard Widmark tying the old lady to her wheelchair and pushing her down the stairs in "Kiss of Death" (1947). Shocking. Despicable. Sickening.

Lou kills a girl by beating her face to a pulp. We see the disfiguring results of his punches -- the shots confronting us with her battered visage just long enough so that we dare not look away. His victim is too dazed to react or resist, and the beating becomes a sick, horrifying one-way love scene in which Lou does all the talking. He doesn't fight to hold back emotion; he expresses what he has. Just before he delivers the final blow, he asks tenderly if she can still hear him, then whispers, "I love you. Goodbye." And he means it, as much as he can. That's what makes the moment so uncannily terrifying.

Some childhood flashbacks give us hints of how Lou got this way, but the movie isn't interested in diagnosing him, just presenting him plainly and realistically in a manner as flat and dry as the Texas landscapes (though the movie was actually shot in Oklahoma and New Mexico). "The Killer Inside Me" looks like the garish cover of a sleazy paperback crime novel -- it's spectacular to watch, but it's not prettified. The lurid colors and period details get under your skin like a bad tattoo and make you feel a little queasy. 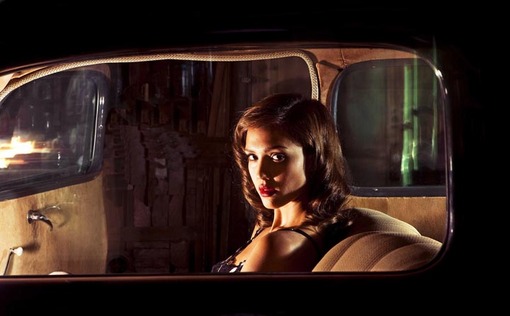 At the start of the movie, on the drive out to what becomes the scene of his first pair of homicides, Lou lays the groundwork for what's to come in his choked, matter-of-fact voiceover:

"Out here you say yes ma'am an no ma'am to anything with a skirt on. Out here if you catch a man with his pants down you apologize, even if you have to arrest him afterwards. Out here you're a man and a gentle-man or you aren't anything at all. And god help you if you're not."

I heard some outraged letters from listeners on NPR the other day, reacting hysterically and ignorantly (they hadn't actually seen the movie) to an "All Things Considered" interview with Casey Affleck. They were horrified that the film depicts "violence against women." Hell yes it does (though not exclusively) -- and what does the above paragraph tell you about the world those women are living in? Frankly, I'm more horrified by the fall Kevin James' stunt double takes, from a rope swing down a wooded hillside and into a lake, in the trailer for "Grown Ups." That's exploitive violence. It's brutal, but it's supposed to be funny.

"The Killer Inside Me" is undiluted, mainline noir, the kind of movie you can imagine Robert Mitchum having made if he'd been allowed to go all the way, and an even more caustic Thompson adaptation than Stephen Frears' "The Grifters" or James Foley's "After Dark, My Sweet" (both terrific films). Its charred, bitter, apocalyptic dead-ending is worthy of "Kiss Me Deadly." Is it bleak and disturbing? Yes, and it earns every bit of it.

P.S. I remember talking with Quentin Tarantino one night about Thompson. The remake of "The Getaway" had just been released and QT was outraged that neither screen version had included the last chapter of the book, which he saw as the whole reason for the story. In the novel, the endpoint of the getaway -- the place the robbers want to hide out to spend their loot -- is El Rey, a kind of inescapable existentialist hell in Mexico where the corrupt and soulless feed on each other. Tarantino worked it into his vampire screenplay, "From Dusk Till Dawn."

The way I look at it, Winterbottom's "The Killer Inside Me" takes place in the American El Rey -- only most of the people who live there don't know it.

"The Killer Inside Me" is available on IFC On Demand.

A interesting piece -- and a primer on the violence "controversy" -- by British film critic Mark Kermode (including the clip from which I transcribed the narration above):

ADDENDUM (06/26/10): Checking out some of the other reviews on Metacritic just now, I found Andrew O'Hehir's superb piece in Salon. A few exerpts relevant to this post and the comments below:

Unfortunately, "The Killer Inside Me" has already become a Rorschach blot that reflects the public's widely varying ideas about extreme media depictions of violence, especially violence against women. I say "unfortunately" because few of the pro-or-con responses based on that perception will do justice to the work itself. If you believe, or fear, that movie violence serves as a form of pornographic wish-fulfillment for male audience members, and may in fact legitimize or enable acts of real-world violence, then of course you'll find the movie repellent and indefensible, no matter how well it's executed or what its creators have to say about it. [...]

Winterbottom's adaptation of the novel is spellbinding cinema, with all the atmosphere, technical excellence and expert pacing the British director is known for. Perhaps more important, it captures much of the nihilistic soul of Thompson's novel, which aims to be a self-undermining critique of crime fiction, as well as a bleak biblical parable about the darkness and violence he sees at the heart of America and masculinity and perhaps human nature. In a funny way, "The Killer Inside Me" comes closer to agreeing with its critics than its defenders; it's almost a work that argues that it ought not to be seen (or read), or at least ought not to be necessary.

I would argue, in fact, that the book and movie's portrait of Lou Ford pre-echoes some second-wave feminist ideas about men, women and rape, such as those of Susan Brownmiller. Thompson believed that male-female sexual relations, even in their so-called normal guise, contained hints of violence, and that it didn't take much to tip them over into terrible brutality. He definitely does not depict Lou and Joyce's S/M sexual relationship as innocent and consensual play (as contemporary p.c. sexuality would have it), but as the mutual opening of a door that leads to much darker places. There are hints of a psychological explanation, if you want them -- Lou has a history as both a sexual abuser and an abuse victim -- but the boundary between normalcy and raving psychotic madness seems dangerously permeable.

As I wrote in April, to complain that "The Killer Inside Me" is full of misogynistic violence is a little like reading "Moby-Dick" and objecting to all the stuff about whaling. Violence against women is Thompson's text and theme and central metaphor -- and in case I haven't made this clear, anyone who might find the violence in this movie gratifying or arousing is already virtually beyond the bounds of professional help.