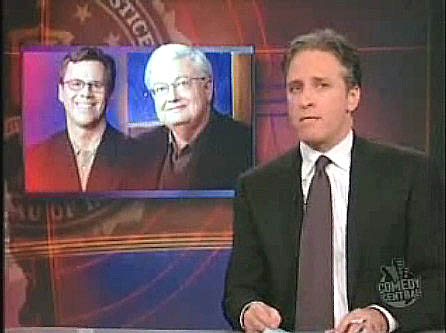 Seven men from now: How many Chicagoans does it take to make up a phony terror cell?

On Monday night's The Daily Show, Jon Stewart reported on the big press conference called by Attorney General (and Pillar of Integrity) Alberto Gonzales to announce the arrest of seven men for "conspiring to support the Al Qaeda organization" -- by, maybe, tossing out the idea of blowing up the Sears Tower. Or something. Except that it turns out the men were a gaggle of losers living in Miami, had no weapons or explosives and no terrorist network connections, and one of them had mentioned the Sears Tower one time. However, one of the, uh, "alleged terrorists," was familiar with Chicago. (As Maureen Dowd described them on Saturday ("We Need Chloe!"): "[The] Miami gang of terrorist wannabes... look like they couldn't find the local Sears, let alone the Sears Tower. These guys were so lame they asked an informant for boots, radios, binoculars, uniforms and cash, believing he was Al Qaeda — and that jihadists need uniforms.")

Observed Stewart: "No weapons, no actual contact with Al Qaeda, but one of them had been to Chicago. By that standard, I believe this [see above] may be a terror cell." No doubt A--- C-----r & Co. would agree. Your Homeland Insecurity dollars at work...