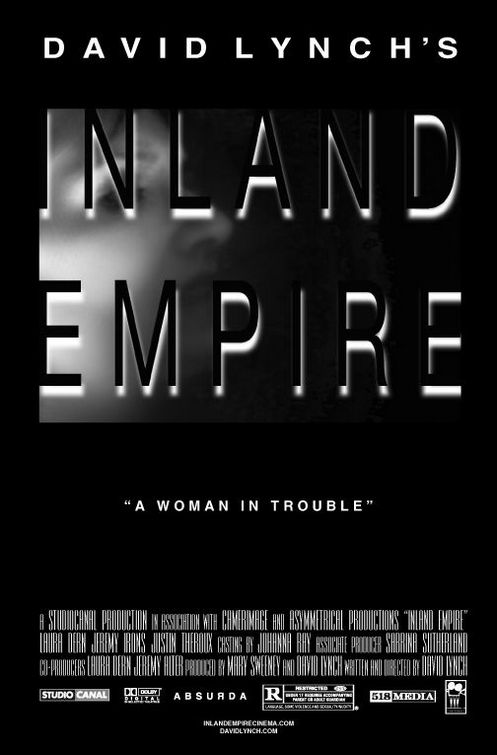 If you have to ask what "Inland Empire" is about, you haven't read the poster.

David Lynch returned to the Great Pacific Northwest Wednesday night for two screenings of his three-hour "Inland Empire" (at 7:30 and midnight), bringing with him to Seattle a fresh, hot shipment of David Lynch Coffee. That's good coffee! (Packaging tagline -- from "Inland Empire," it turns out: "It's all in the beans, and I'm just full of beans.") Just a few blocks away, in the Pike Place Market, was a little shop where I used to get my beans, when I first became a serious coffee-drinker in college. It's still there, and it's still called Starbuck's, but I hear there are more of them now.

I went to the early show. (When it was 9:45 I probably thought it was after midnight.) Lynch began by introducing a cellist who performed a brief improvisational piece "to set a mood." Then Lynch read a short verse:

And then "Inland Empire" hit the big Cinerama screen (in the theater where I saw "2001: A Space Odyssey" in its original release, when I was 10). I won't say much more about the movie now (I just finished a longer piece that will run next week), but the local crowd went wild when a lumberjack appeared. We live in the land of "Twin Peaks" here, you know. Lynch spent some of his formative years growing up in Spokane, on the other side of the Cascades, in what Washingtonians refer to as the Inland Empire (though most people associate the term with California).

After the movie, Lynch took questions from the audience. Most of them were pretty lame (as is usually the case at these sorts of events), but nothing fazed Lynch, who was gentle, gracious and folksy. He was most passionate when talking about finding "the idea" for whatever he was trying to create, and working and working to realize it. With actors, he said, he likes to bring them in for a rehearsal of one scene -- any scene. (This process is shown in an early scene in "Inland Empire," which was reportedly filmed over the space of a couple years without any finished script. Lynch would shoot when he decided he had an idea for something he wanted to shoot.) The actors would read it and, "if it wasn't perfect" -- and Lynch admitted it rarely is, the first time through -- they would talk. Then rehearse some more. Then talk some more. And so on until he felt they'd brought the scene around to where it was serving "the idea."

He spoke similarly of music and sound, which he feels are -- or should be -- inseparable from the images. (Lynch did the sound design and wrote some music for "Inland Empire," but credits composer Angelo Badalamenti with introducing him to "the world of music.") He finds or writes or creates the music first, and then spends a lot of time and effort and experimentation getting the sounds and images to combine catalytically.

Lynch was enthusiastic about his experience shooting with a small digital camera (the Sony PD-150), and said he began using it to make shorts for his web site. After he'd made a few, he started thinking about them in terms of a larger framework story, and by then he was "already locked into" the digital format. He said he loved the freedom it allowed him (wait till you see the close-ups he goes for -- he coulda poked somebody's eye out!). Sure, he said, this format (it's NOT high-definition like, say, "Miami Vice") doesn't have the quality of film, but it has its own qualities, its own textures. And, Lynch said, it was so easy to push and to tweak at will to get the effects he wanted. Best of all, he didn't have to stop the actors to re-load the camera after every ten minutes of exposed film. He could keep things going for 40 minutes (sometimes shooting with three cameras simultaneously), which he thought allowed for interesting things to happen that might not have happened otherwise.

A questioner noted that characters in David Lynch movies are often subjected to great anguish and trauma. He asked Lynch what was the worst he'd ever been hurt -- physically, the fellow clarified. After a long pause, Lynch told a story about his childhood in Spokane. His family was visiting another family, and they had a punching-bag snowman with sand in the bottom. Another boy hit the snowman, which knocked over young David, who gashed his head on the moulding around the doorway. Lynch said he remembers being adamant about not wanting to get stitches, but doesn't recall what happened.

Someone observed that Laura Dern uses a touch-tone phone in "Inland Empire," perhaps the first non-rotary telephone in the Lynch oevre. Lynch suggested that, perhaps, with this movie, he was slowly moving into the 20th century. Or did he say 21st?

Lynch's new book is called "Catching the Big Fish: Meditation, Consciousness, and Creativity." He said the first step in the creative process for him was letting go of negativity, which then allowed creativity to flow in. Somebody asked if "Inland Empire" was itself a big fish.

"'Inland Empire' is a whale," said Lynch, "with a lot of smaller fish swimming around inside it."

One woman posed the most succinct question of the evening: "What is the movie about?" (This, it should be pointed out, was after she'd just seen it.)